When it comes to McDonald's (NYSE:MCD) these days, the old "I'm lovin' it" jingle comes to mind. The stock is hitting new all-time highs this summer, and the shares are trouncing the market by rising 32% so far in 2017. The more impressive nugget is that the shares have now moved higher for 10 consecutive months, soaring 44% during that inspiring winning streak.

This isn't the same company that was mired in a nearly two-year run of negative stateside comps until All-Day Breakfast came to save the day in late 2015. That event may have been the initial catalyst for the chain turning sales at the unit level around, but there's so much more to the McDonald's success story than toasting up an Egg McMuffin at 3 in the afternoon. 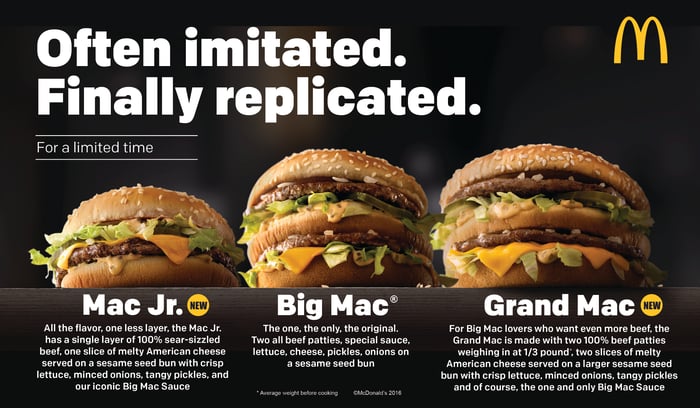 You deserve a break today

Everything that McDonald's seems to be doing these days is working, and it actually started before All-Day Breakfast hit the menu 22 months ago. Steve Easterbrook was tapped as CEO in early 2015, spearheading some brilliant initiatives that have served franchisee owners well but shareholders even better.

Let's start with the refranchising move. Franchisees have always owned most of the Golden Arches out there, but Easterbrook has led the way in handing over more of its company-owned locations to proven independent operators. Mickey D's expects to refranchise 4,000 locations in 2017, and by year's end we should see that 93% of its restaurants are owned and operated by franchisees.

Handing over company-owned locations is a smart move. Pushing the burden of operations off to franchisees may lower revenue -- and we've seen year-over-year declines for 12 straight quarters -- but it boosts margins and royalty streams. It also allows McDonald's to prune its overhead, as it expects to shave another 5% to 10% in general and administrative costs once the handoffs are complete. The refranchising effort should also help make it less of an activist target. McDonald's has become the leading pinata for protestors clamoring for fast-food chains to pay employees $15 an hour. It's a harder argument to make when you're gunning for independent operators working on thinner margins.

McDonald's is also making the most of its pole position as the world's largest burger chain to roll out technology features that it can scale across its empire. Touchscreen kiosks are popping up, a win-win that makes the ordering process more convenient for customers while allowing franchisees to do more with fewer workers. We then get to the McDonald's app that has blown up in popularity this year thanks to the healthy flow of freebies and discounts that hungry patrons can claim by simply scanning their smartphone screens.

Save room for dessert

Discounting already cheap food items through app deals and bold initiatives like $1 soft drinks this summer are keeping the restaurants buzzing, with franchisees instead of the company bearing the potential margin-munching transactions. McDonald's is also improving its food quality, something that should drive the value proposition home with even more force.

McDonald's is doing right by its stakeholders. Part of the long-term plan it announced earlier this year was to return $22 billion to $24 billion to investors through buybacks and dividends over the next three years. The burger baron is getting the job done, making it hard to resist even for investors who can resist the Golden Arches' savory temptations.