Two members of the U.S. House of Representatives Committee on Oversight and Government Reform want to know why the prices of multiple sclerosis (MS) drugs are so high. Rep. Elijah Cummings (D-Md.) and Rep. Peter Welch (D-Vt.) have sent letters to seven drugmakers, including Biogen (NASDAQ:BIIB) and Teva Pharmaceutical Industries (NYSE:TEVA), asking for information about factors related to pricing for their MS products.

These letters appear to be an opening salvo in what Cummings and Welch vow will be a full investigation into pricing of MS drugs. I don't think an investigation is needed at all, though. There's a simple reason why these drugs cost so much: It's just the way our system works. 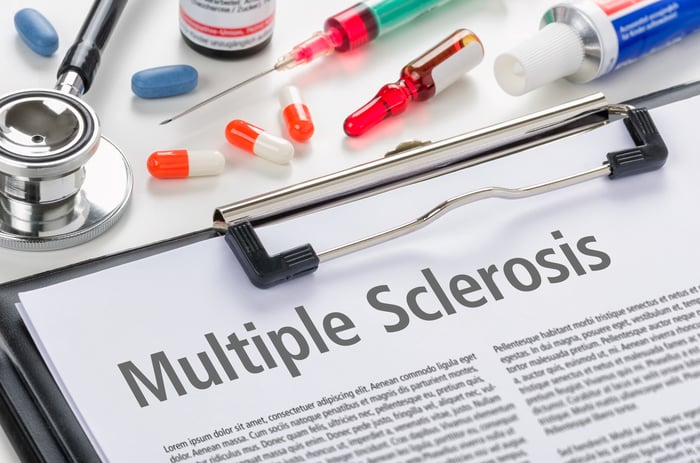 The way things are

This might shock some politicians, but for-profit companies are in business to make profits. The more profits they make, the happier the companies make their owners. Biogen, Teva, and other drugmakers give high price tags to their drugs so their profits will be sufficient to reward their owners -- the companies' shareholders -- with higher stock prices and, in Teva's case, with dividends.

But are Biogen and Teva making outrageous profits? Biogen posted a profit margin of 27% in the first half of 2017. That's high, but not ridiculously high. And Teva lost a whopping $6 billion in the second quarter of 2017. Sales for the company's top-selling MS drug Copaxone dropped 10% year over year. If the big drugmaker is gouging payers, it's not working very well.

It's also important to note that these drugmakers don't charge a penny more than what insurance companies and pharmacy benefits managers (PBMs) are willing to pay. If they did, they wouldn't sell their products. Are the payers just as at fault for high MS drug prices? In a way, yes, because they're just as much a part of the system as the drugmakers are.

In their letter to the seven biopharmaceutical companies that make MS drugs, Reps. Cummings and Welch wrote, "We believe no American should be forced to struggle to afford lifesaving medical treatments, especially when drug companies increase prices without warning, cause, or justification." The real issue is that drug companies do have cause and justification to increase prices. Indeed, the system incentivizes them to do so.

In a free-market economy, competition is expected to keep prices from getting out of control. There have been six new MS drugs introduced since 2012. However, prices haven't gone down. Why? The main reason is that drugmakers have priced new drugs similarly to existing drugs. And when a rival increases its prices, others follow with similar increases.

This pattern, sometimes referred to as "shadow pricing," concerns Reps. Cummings and Welch. However, it's not illegal -- our system allows it. (The exception is when companies collude to fix prices, something that has not been alleged against any of the seven drugmakers.)

The timing of the congressmen's plans to investigate MS drugs is interesting, though, considering the latest entrant to the field. Roche (OTC:RHHBY) recently launched Ocrevus, a drug originally developed by Biogen and licensed to Roche. Ocrevus not only is more effective than some existing MS treatments, it's also cheaper than the competition.

It could be that Roche's pricing decision helps bring down the costs of other MS drugs. I wouldn't be surprised at all, for example, if Biogen lowers its price tag for Tecfidera to keep sales from deteriorating as much as they would have without a price decrease.

My Foolish colleague Brian Orelli recently wrote an excellent overview of why prescription drugs are so expensive. The points he made are for prescription drugs in general, but they definitely apply to MS drugs. The factors Brian identified also hint at potential solutions for the issue that Reps. Cummings and Welch want to address.

One major issue is the lack of generics or biosimilars for leading MS drugs. Only one generic is currently approved in the U.S. -- Novartis' Glatopa, a generic version of Copaxone 20 mg. While generics for the higher 40 mg dosage of Copaxone are on the way, streamlining the approval process for generics and biosimilars could help reduce overall costs over the long run.

Allowing Medicare to negotiate drug prices would also likely lead to lower drug prices, for MS and other indications. Currently, the government program is prohibited from such negotiations.

Drugmakers wouldn't like it, but another idea is to limit direct-to-consumer advertising. Last year, biotechs and pharmaceutical companies spent $5.6 billion marketing their drugs to patients. You can bet that amount was tacked on to their drug prices.

The tactic used by the two congressmen could also have an impact. Big pharma companies shy away from too much negative publicity. It's possible that drugmakers could keep future price increases in check as part of an effort to improve their public image.

There is a danger, though, in throwing the baby out with the bathwater. Drugmakers invest billions of dollars in research and development to create better treatments for diseases. If they can't get a satisfactory return on investment, the companies won't make the investment in the first place. The one thing worse than expensive MS drugs would be no further advances in treating the disease.