As you might expect, Johnson & Johnson (NYSE:JNJ) makes a lot of money. Last year, the healthcare giant generated revenue totaling nearly $72 billion. Over the past decade, J&J raked in over $668 billion. To put that amount into perspective, consider that a stack of that many $1 bills would reach more than 45,000 miles into the sky -- close to one-fifth the distance to the moon.

But where does all that revenue come from? Here's how Johnson & Johnson makes most of its money. 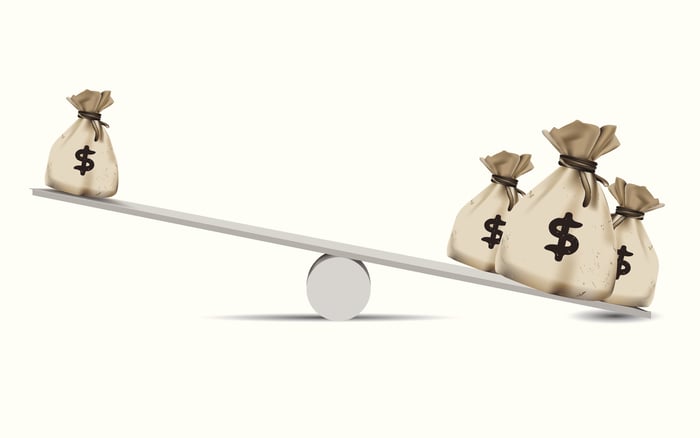 Around 46% of Johnson & Johnson's total revenue stems from its pharmaceutical segment. But the segment generates an even higher percentage of the company's total profit -- roughly 65% in the first half of 2017.

Close to six out of every 10 dollars in sales for J&J's pharmaceutical segment occur in the U.S. That's not surprising, considering that prescription drug prices tend to be higher in the U.S. than elsewhere. However, the company is seeing more growth in international sales so far this year.

Johnson & Johnson's top-selling drug by far is Remicade, which made nearly $7 billion last year. Sales are slipping somewhat for the autoimmune disease drug, though, in the face of competition from Pfizer's biosimilar, Inflectra.

The company does have several blockbuster drugs for which sales are growing. Stelara and Imbruvica stand at the top of the list. Psoriasis and psoriatic arthritis drug Stelara generated $3.2 billion in sales last year and made $1.8 billion in the first half of 2017. Cancer drug Imbruvica brought in nearly $1.3 billion last year and $859 million in the first two quarters of this year.

Johnson & Johnson's second-largest moneymaker is its medical devices business segment. This segment contributes around 36% of total revenue and 23% of total segment profit.

The company actually makes more revenue from medical device sales outside of the U.S. than inside the country. In the first half of 2017, the medical devices segment generated $6.7 billion from international sales compared to $6.3 billion in the U.S.

Orthopedics and surgical medical devices both contribute around 36% of the segment's total revenue. Vision care, especially contact lenses, kicks in another 14%. The remaining sales for the segment stem from cardiovascular, diabetes care, and diagnostics devices.

Most Americans probably know Johnson & Johnson best for products like Band-Aid, Listerine, and Tylenol. However, the company's consumer segment is its smallest, generating 18% of total revenue and less than 12% of total segment profit.

International markets are the biggest source of revenue for J&J's consumer segment. In the first half of this year, the company sold $3.8 billion of products internationally versus $2.9 billion in the U.S.

Two areas are the primary moneymakers for the consumer segment. Over-the-counter (OTC) products and beauty products each contribute around 30% of total consumer sales. The rest of consumer revenue comes from J&J's baby care, oral care, women's health, wound care, and other products.

Where the money is moving

In 2016, J&J's pharmaceutical segment posted the strongest increase in revenue. However, so far in 2017, the company's medical devices segment contributed the highest growth. This shift is due in large part from the headwinds for Remicade.

Over the long run, though, look for pharmaceuticals to become an even more important source for revenue and profits. Johnson & Johnson claims one of the best pharmaceutical pipelines in the industry. Experimental prostate cancer drug apalutamide is a particularly promising candidate.

J&J could also reap the rewards from its acquisition earlier this year of Swiss drugmaker Actelion. Before the deal closed, Johnson & Johnson predicted that Actelion could increase its overall revenue growth rate by 1% and bump its annual earnings growth by as much as 2%.

With the impact of Actelion and its pipeline, combined with solid growth from current products including cancer drugs Darzalex and Imbruvica, Johnson & Johnson's pharmaceutical revenue should grow larger as a percentage of total sales. J&J makes a lot of money now -- but you can bet that it will make even more in the future.