Stocks closed down Wednesday following a broad rally the day before, and the market turned its attention to President Donald Trump's threat to discontinue U.S. participation in the North American Free Trade Agreement (NAFTA), which cast a shadow on trading. Yet even as the major benchmarks all finished slightly lower, several stocks managed to post solid gains. Fiat Chrysler Automobiles N.V. (NYSE:FCAU), Intra-Cellular Therapies (NASDAQ:ITCI), and Express, Inc. (NYSE:EXPR) were among the best performers of the day. Below, we'll look more closely at these stocks to tell you why they did so well.

Shares of Fiat Chrysler Automobiles, known for its flagship Jeep brand, gained 7% on reports that the company is considering a spinoff of its luxury Maserati and Alfa Romeo brands, as well as its components business. Estimates place the value of the luxury car companies at as much as $8.3 billion, while the parts operations could fetch nearly $6 billion. Fiat Chrysler had previously rejected an acquisition offer from a Chinese carmaker that it believed was too low, but this latest news indicates that the company may be looking to unlock value by selling off various subsidiaries in an effort to retire nearly $5 billion of its debt by next year. The company successfully spun off its super-performance Ferrari unit early last year, and that stock has nearly doubled since a percentage of its shares first went public in October 2015. 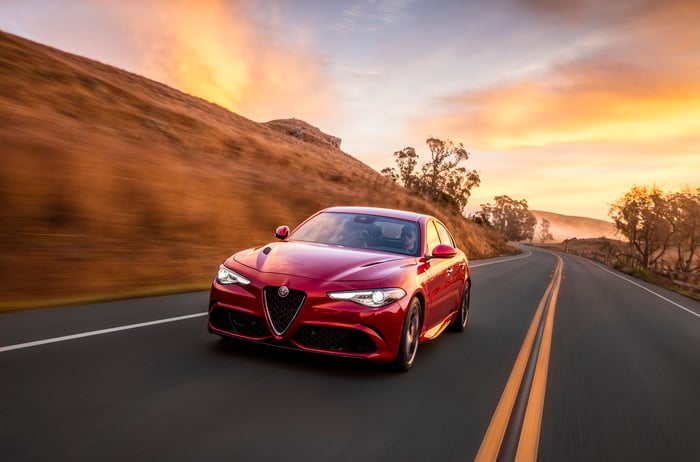 Intra-Cellular gets a shot in the arm

Shares of Intra-Cellular Therapies soared more than 27% higher on a positive regulatory update from the U.S. Food and Drug Administration (FDA) regarding its lumateperone treatment for schizophrenia. The agency had previously requested additional information regarding the toxicology studies of the drug to ensure that it was safe for humans. The FDA completed its review and "agrees that the Company has presented adequate data to support its position that the metabolic pathway in the animal species is distinctive from [that in] humans, which indicates that the toxicity observed in the animal species is not relevant to humans." This opens the door for the company to submit a new drug application (NDA) for the treatment of schizophrenia, which it plans to have completed by mid-2018.

Moving to the Express lane

Express skyrocketed more than 19% after reporting financial results that weren't as bad as investors had feared. The apparel retailer reported that net sales fell 5% compared to the same period last year, with a loss of $0.15 per share, as the company looked to complete the discontinuation of its operations in Canada. Adjusting for costs associated with the departure, the quarter would have been profitable. While same-store sales fell by 4%, the results were at the high end of the company's forecast and better than expected. Express management was enthusiastic about its e-commerce results, which increased 28% over the prior-year quarter, to account for 19% of net sales. This comes as welcome news to shareholders, who had seen shares fall by 50% from this year's highs prior to the financial report. While the company may not be out of the woods yet, investors cheered the results as a step in the right direction.