There are lots of reasons to like this online-only bank.

BofI Holding (AX 2.50%) isn't exactly a household name -- yet. With around $9 billion in assets, the bank is less than half of 1% the size of the largest U.S. banks, so it's not surprising that many investors haven't heard of it. However, there are plenty of reasons why BofI should be on your radar. Here's a quick rundown of the reasons I love BofI Holding as a long-term investment and why it may be smart to get in while it's still relatively small.

Because BofI operates exclusively online, with no physical branches, it has a huge cost advantage over brick-and-mortar banks. Just take a look at how its expenses (as a percent of assets) compare to its peer group.

As you might imagine, this low expense structure has made BofI extremely profitable and efficient. The bank's return on equity (ROE) of 23.66% and return on assets (ROA) of 2.09% are more than double the industry benchmarks of 1% and 10%, respectively. It also ranks in the fourth percentile in terms of efficiency (lower is better). 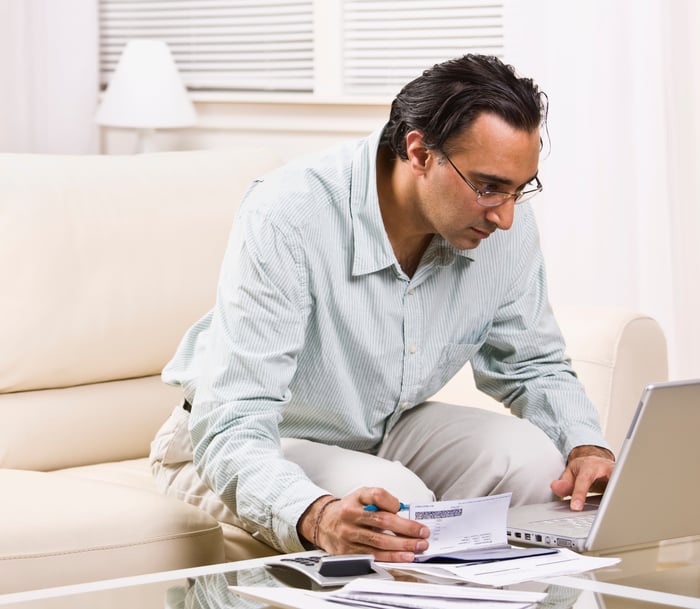 As a result of this strong growth, as well as the bank's continuously improving efficiency and profitability, BofI's earnings per share have grown at a staggering 32% annualized rate since 2011.

Lots of room to grow

Perhaps the best reason to like BofI is for its potential. Although the bank has grown tremendously in the past few years, there could still be plenty of room to expand.

BofI has been actively adding new revenue streams, such as auto lending. BofI launched a pilot program in unsecured lending in January, and just recently announced the expansion of its relationship with H&R Block. For the upcoming 2018 tax season, BofI will handle all of the tax preparer's refund anticipation loans. Not only is this certain to boost revenue all by itself, but it creates lots of possibilities for cross-selling the bank's other products.

It's also important to realize that although BofI has about $8.5 billion in assets, this is still quite small as far as banks go. To put this into perspective, consider that BofI has $6.9 billion in deposits. Wells Fargo and Bank of America have about $1.3 trillion each. Now, I'm not saying that BofI will ever be in the same league as these two. However, if BofI could just get to 5% of the size of one of these big players, it would be more than eight times its current size.

As I write this, BofI trades for 2.05 times its tangible book value of $12.94 per share. At first, this may sound expensive, but it's actually rather cheap, considering how profitable and fast-growing the bank is.

BofI is a highly profitable and efficient bank that is growing rapidly, and as consumer preferences shift even more toward convenience in banking and BofI continues to add new revenue streams, there's no reason to believe the growth won't continue. In addition, the stock is downright cheap when you consider its growth. BofI could become a much bigger bank in the coming years, and now could be a smart time to take a closer look at the stock.