Considering all the carnage sweeping through the retail sector this year, Nordstrom (NYSE:JWN) investors were delighted to learn two months ago that the founding family was interested in taking the company private. Since the announcement, Nordstrom shares have traded primarily based on investors' confidence that a go-private deal will happen.

Indeed, Nordstrom shares rallied from around $40 in early June to a high near $49 in early August. However, the stock has given up half of those gains in the past few weeks, after various sources reported that the buyout talks were "informal" and bankers suggested that the Nordstrom family was running out of time to get a deal done in 2017. 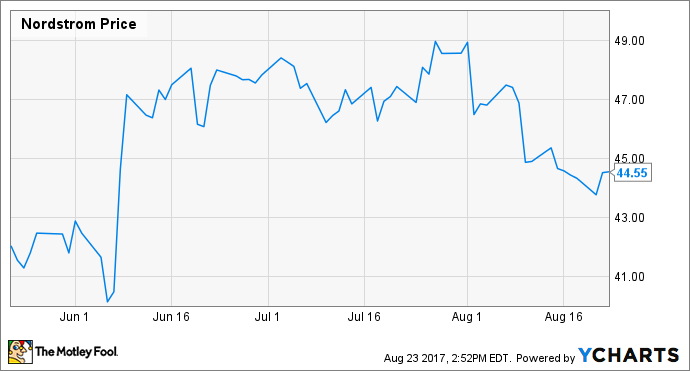 Nordstrom expects to generate earnings per share of $2.85-$3.00 this year, so it's not surprising that many investors would love to participate in a buyout at $50-$60 per share. (Many other department-store companies are trading for 10 times earnings or less.) However, Nordstrom's profitability is a lot better than its EPS performance would suggest.

While many investors focus on earnings per share when evaluating companies, free cash flow is often a better metric. Unlike accounting earnings, free cash flow excludes non-cash expenses that may reflect sunk costs. Furthermore, it better captures a company's ability to pay dividends, buy back stock, or make acquisitions.

For many years, free cash flow routinely trailed accounting earnings at Nordstrom, because of the company's heavy growth-related investments. That changed in 2016, though, as Nordstrom produced adjusted EPS of $3.14 but free cash flow of more than $4 per share.

Nordstrom's free cash flow was boosted by an unusually large improvement in working capital last year. But while Nordstrom can't count on further working capital reductions, it will benefit in future years from lower capital spending relative to the depreciation and amortization expense it reports on its income statement. Capex totaled $846 million in fiscal 2016 but is expected to decline to about $650 million annually between 2018 and 2021.

Growth initiatives are weighing on profitability

Free cash flow is a better profitability metric for Nordstrom than accounting earnings, but it still doesn't provide a complete picture of the company's earnings power. That's because Nordstrom is incurring various growth-related expenses that show up on its cash flow statement as well as on its income statement.

Pre-opening costs for Nordstrom's Manhattan flagship store represent a great example. The main store is scheduled to open in the fall of 2019, while the smaller men's store down the block will open next March. Thus, neither store is generating revenue yet. Nevertheless, Nordstrom expects to incur $30 million of pre-opening expenses for the Manhattan flagship this year. 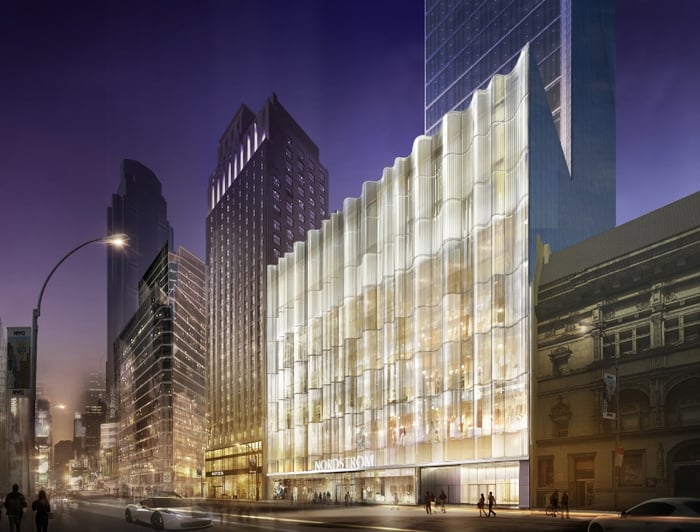 Nordstrom's off-price e-commerce business, its Canadian operations, and the Trunk Club personal stylist service all fit into the "investments" category as well. Collectively, those businesses are starting to progress toward profitability, while delivering strong top-line growth.

Nordstrom's growth investments are already starting to moderate -- and may decline significantly after the main Manhattan store opens in late 2019. As these investments begin to pay off over the next few years, Nordstrom is likely to benefit from strong EPS and free cash flow growth.

Nordstrom stock is a bargain

Today, Nordstrom stock trades for about 15 times the company's 2017 EPS forecast. On paper, that's a steep premium to the valuations of other department store stocks.

However, unlike most of its rivals, Nordstrom is still growing. Moreover, the EPS statistic doesn't fully capture Nordstrom's earnings power: It is depressed by costs associated with the company's current investment spending, as well as depreciation expense related to past investments.

Thus, it's no wonder that management is eager to pay a premium to the current stock price to buy the rest of the company. Nordstrom is deeply undervalued today. The Nordstrom family would have to offer more than $60 per share to entice me to vote my shares in favor of a buyout deal.

Nordstrom, Inc.'s EPS Is a Lot Better Than It Looks @themotleyfool #stocks $JWN Next Article
Current