Please ensure Javascript is enabled for purposes of website accessibility
Log In Help Join The Motley Fool
Free Article Join Over 1 Million Premium Members And Get More In-Depth Stock Guidance and Research
By Tyler Crowe - Aug 25, 2017 at 10:02AM

Diamond Offshore Drilling has made a spectacular turnaround during this market swoon, and now it's ready to reap the rewards.

Diamond Offshore (DO) was able to pull something off last quarter that no other offshore driller has been able to do for at least two years: increase revenue. Some timely new rig contracts coupled with the retirement of several older rigs put Diamond in a great position for when the upturn in the offshore market comes.

Here are a few snippets from the company's most recent conference call that highlight some of the things Diamond's management has done to position itself for the future, and what we can expect in the coming years. 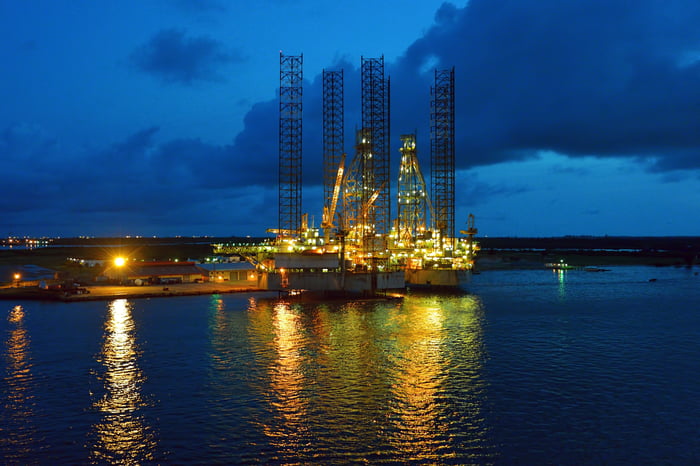 Diamond Offshore went out on a limb last year and signed an innovative deal with General Electric (GE -2.08%) for its Pressure Control by the Hour service. This deal entailed Diamond selling its blow out preventers (BOP) back to GE, and GE leasing them to Diamond on a pay for performance basis. The idea was to minimize downtime and give equipment manufacturers more skin in the game. After a few quarters of working out the initial kinks in the deal, CEO Marc Edwards said on the call that these deals are paying off well.

Recall that these rigs are under our unique-to-the-industry Pressure Control by the Hour construct initiated just over a year ago, the benefits of which are now beginning to kick in. For example, the revenue efficiency on the Black ships has increased by over 300 basis points quarter-over-quarter, with BOP performance being a significant contributor.

Other rig companies have partnered with General Electric for other hybrid equipment & service contracts. Based on the success of this one thus far, don't be surprised if we see a lot more offshore companies do something similar.

Offshore costs about to have a structural change like shale

Over the past few years, offshore drilling has been losing the fight for capital spending dollars to shale. The breakeven cost for a shale well dropped so dramatically that offshore has been slow to keep up.

One of the major developments that allowed shale to become so much more cost effective is the ability to drill a well in much less time. Today, the average shale well takes less than two weeks to be completed. While offshore certainly isn't going to be able to replicate those kinds of speeds, Edwards did note that the time to drill a well is coming down significantly.

During the past quarter, we drilled a well in the Gulf of Mexico to 31,000 feet, 30% faster than the planned drilling schedule.

Reducing time to drill a well means a producer can do its exploration & development drilling on a shorter contract. That translates to lower costs and better returns for offshore projects. In turn, rig companies that can drill wells at a much faster rate will be able to charge higher day rates and likely attract more producers to the offshore environment. If Diamond really can deliver wells on such a shorter schedule, then it will garner a lot of attention from producers.

Demand -- or lack there of -- for offshore rigs has certainly impacted the industry, but it is also suffering from way too many available rigs. While the industry as a whole has retired a lot of rigs, it's going to take a lot more retirements to get to a point where the industry isn't suffering from oversupply.

This past quarter, Diamond retired five older rigs. What was surprising about those retirements was that some of them still looked like attractive assets. The issue, according to Edwards, was that the amount of money to get them back to working condition after years of sitting idle wasn't worth the capital spending.

[I]n our fleet status report issued earlier today, we announced the decision to retire five rigs this quarter, of which four are moored rigs and one is dynamically positioned [DP]. Although, we believe the moored rig segment to be less distressed than the DP segment, we have further reviewed the useful life of the Princess, the Nomad, the Vanguard, the Baroness, and the Alliance, and do not believe that the size of the future reactivation costs warrants keeping these assets in the fleet. These rigs have been cold stacked for some time now, and although the holding costs are minimal, the combination of special surveys, required regulatory upgrades, and other increasing reactivation costs, imply that our future capital is best deployed elsewhere.

Getting in on the acquisition game

So where, exactly, would the company better deploy its capital? According to Edwards, buying assets from distressed rig companies or even making an acquisition seems like where he sees the best options.

We continue to spend a considerable amount of time and effort evaluating various strategic opportunities, including the acquisition of rigs and companies. However, at current prices, deal economics simply don't work for us. A top priority is to enhance our fleet, and we will continue to evaluate ways to accomplish this, but will act only when it is in the best interests of our stakeholders.

Diamond's interest in assets isn't anything new. Both Transocean and Ensco have recently made multi-billion dollar acquisitions to consolidate the industry and bolster their fleets for when the market picks back up again. While Diamond thinks the economics don't work today, it will be interesting to see if its attitude changes on the very likely event that one of the largest players in the industry files for bankruptcy in the coming months.

Diamond is in one of the best positions among rig companies. While it doesn't have any plans to build new rigs, it has the balance sheet to start a new build program or make an acquisition if it wants to. It also has all of its most recently constructed rigs under contracts that run for at least a year. If Diamond and others can continue to find more efficient ways to drill and lower the structural costs for a producer like it has recently, then it could help initiate a market turn around relatively soon.