Shares of American Eagle Outfitters (NYSE:AEO) popped 8% on Aug. 23 after the apparel retailer posted second quarter earnings that crushed analyst expectations. Its revenue rose 3% annually to $845 million, beating estimates by over $20 million. Its adjusted earnings dipped 17% to $0.19 per share, but still topped expectations by three cents.

Yet AEO remains down 20% for the year due to a broad sell-off in apparel stocks -- which are considered easy targets for fast fashion retailers and e-commerce challengers. Nonetheless, I believe that AEO is undervalued at current levels, and is a compelling investment for long-term investors who ride out the volatility. 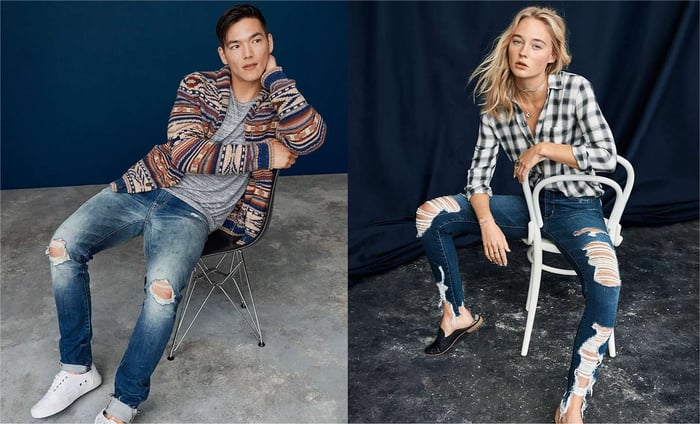 AEO's comparable store sales rose 2% during the second quarter, which easily beat its prior forecast for a single-digit decline to flat growth. Unlike many other apparel retailers, AEO has a solid track record of positive comps growth:

For the current quarter, AEO anticipates flat to low single-digit comps growth. That consistent growth is supported by its Aerie brand of lingerie and activewear for young women, which offset the anemic growth of AEO's namesake brand over the past year:

Aerie remains a small part of AEO's overall business, but it's posted 14 straight quarters of double-digit comps growth, and nearly 40% of its sales now comes from digital channels. 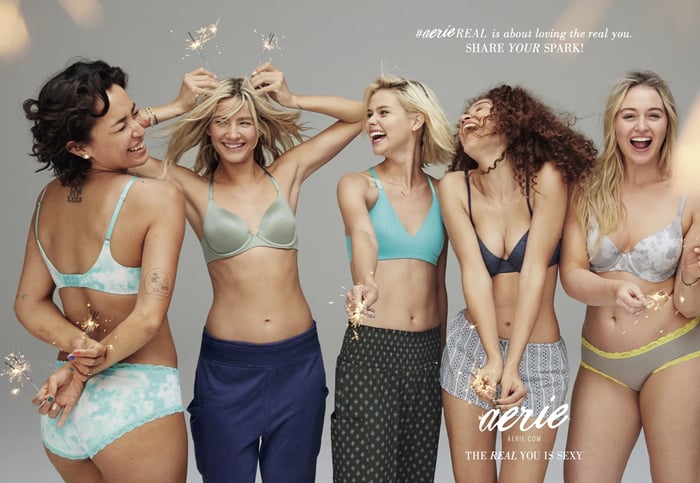 Aerie carved out a defensible niche with its marketing messages of "body positivity" delivered through untouched photos of models and empowering social media campaigns -- which represent a stark contrast to L Brands' (NYSE:LB) sexed-up marketing campaigns for Victoria's Secret. Victoria Secret's comps fell 14% last quarter, partly due to its exit from swimwear -- a category which Aerie is aggressively expanding into.

As for AEO's namesake brand, robust sales of its jeans and womenswear were offset by softer sales of menswear. However, AEO claims that it saw "record performance" in sales of men's bottoms and a "good turnaround" in men's tops during the quarter -- indicating that its multi-quarter slide in menswear could finally end. Moreover, AEO actually opened four new stores sequentially (bringing its total store count to 1,057) -- which indicates surprising confidence as other apparel retailers shutter stores.

But mind those margins...

AEO's top line growth looks solid, and analysts expect its revenue to rise 2% this year. However, its earnings are expected to fall 13% as its margins contract. AEO's gross margins fell 240 basis points annually to 34.9% last quarter, due to "increased promotional activity" along with higher shipping costs and rent.

Those margins remain well above the multi-year lows (of about 30%) it hit in early 2014, but tough competition from fast fashion rivals like Inditex's Zara and H&M could force it to lower its prices further to boost comps.

Meanwhile, its selling, general, and administrative costs -- which rose 2% last quarter -- could keep rising as it pours more money into ad campaigns. That would weigh down AEO's operating margins, which have been in a downtrend over the past decade: 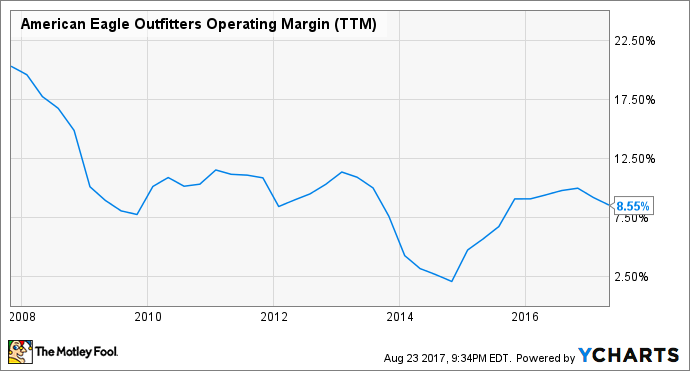 Nonetheless, analysts expect AEO's earnings to rebound 2% next year as the retail apparel environment improves. Moreover, AEO has no debt and finished last quarter with $193 million in cash and equivalents -- which gives it plenty of room to expand via acquisitions.

It's cheap and pays a solid dividend

AEO currently trades at just 10 times earnings, versus the industry P/E of 21 for apparel retailers. Gap (NYSE:GPS) trades at 13 times earnings, while Abercrombie & Fitch's (NYSE:ANF) P/E remains negative due to its inconsistent profitability.

It's time to get greedy with AEO

AEO's second quarter report confirms that it shouldn't be tossed out with broken apparel retailers like A&F. AEO remains a "best in breed" play in this tough market, and it's repeatedly posted positive comps growth in the face of tough competition from fast fashion and e-commerce rivals.

It has a great growth brand in Aerie, the stock is fundamentally cheap, and the company consistently returns its cash to shareholders via buybacks and dividends. Its margin compression remains a long-term concern, but I think investors who buy AEO at current prices should fare well over the next few quarters.