It's been a pretty rough 2017 for Meet Group's (NASDAQ:MEET) shareholders, as the stock's year-to-date decline approaches 30%. That much of a shake-up usually leaves investors wondering whether the company can turn things around any time soon.

So let's take a quick look at the latest results for Meet, which will shed some light on the company's bearish run, and consider how a key competitor, Match Group (NASDAQ:MTCH), could pose an ongoing problem for the company.

Growth but no gains

If you're unfamiliar with Meet, the company owns several social media companies, including MeetMe, Skout, Tagged, and Hi5, which allows users to make new social connections and interact with their friends. The company has more than 2.5 million daily active users across its brands and generates the vast majority of its revenue from advertising.

Meet had a few dips and pops earlier in the year, and its share price actually gained over 20% in March after the release of its fourth-quarter earnings report. But investors started turning against the stock in May after the company reported its first-quarter results. Revenue was up 51% year over year to $20.1 million, beating the analyst consensus, but even the company's 61% jump in mobile revenue failed to satisfy the market.

The problem was Meet's rising operating costs, which increased 62% year over year. The largest component included sales and marketing expenses, which skyrocketed 121% during the period. The increased expenses across several business segments resulted in a year-over-year net income decline of 80%. That didn't sit well with Meet investors as you can see below. 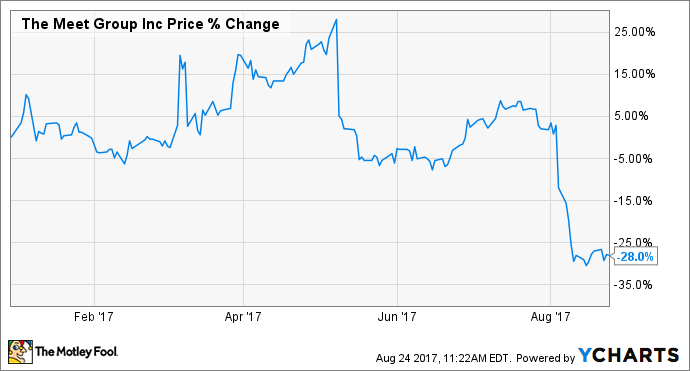 The bad news didn't end there. With the next bout of earnings, investors were unhappy with management's full-year 2017 revenue guidance $121 million to $126 million.

But it appears that investors may have been a bit shortsighted regarding the second-quarter results. Take a look at the impressive growth Meet reported:

If there's one thing that the past eight months has shown us, it's that Meet's share price is likely to remain volatile.

Volatility aside, I think there's another factor investors should be keeping a close eye on: Meet Group's lack of a competitive advantage. The company has managed to enjoy stellar customer and revenue growth, mainly from acquisitions, but it could eventually run out of steam after acquiring all of the low-hanging fruit. Stiff competition from other social app companies such as Match Group will only make matters worse.

Match owns 45 different brands, including Match, Tinder, and OkCupid. Meet and Match aren't the same, but they do operate in the same social app space (i.e., finding and meeting new people), and I have my doubts that Meet will be able to sustain its position wedged somewhere in between Facebook and Match Group's deep portfolio.

That's not to say the company is doomed, but without a distinct moat, Meet isn't the best social meetup stock play. Match Group may be growing a little slower right now -- its revenue increased just 12% year over year in the second quarter -- but it already has more than 6 million paying customers from its Tinder offering alone, compared with Meet's 2.5 million active users (which aren't paying customers).

In short, investors may have been unhappy with Meet's full-year revenue projections and rising operating expenses, but I think the bigger long-term issue is that the company is trying to carve out its niche in a crowded space -- and it lacks any unique competitive advantages to fend off the competition.