If negative press coverage could kill a company, Anadarko Petroleum (NYSE:APC) would be dead by now. The Colorado home explosion that was traced back to one of the oil and gas company's wells has lingered on the front pages as investigations are conducted and lawsuits are filed.

But in spite of that, Anadarko managed to mostly outperform its year-ago quarter. The company has been taking pages from the playbooks of peers like Apache Corporation (NASDAQ:APA) and ConocoPhillips (NYSE:COP), and streamlining its operations. It's also attempting to deal with the setbacks it's faced in Colorado. Still, though, Anadarko's results present a mixed picture. Here's what investors need to know. 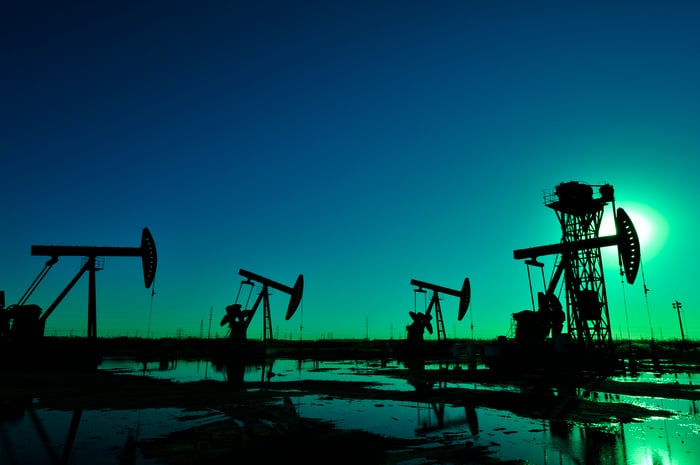 Despite some smart moves to streamline its portfolio, Anadarko Petroleum can't seem to shake its trend of underperformance. Image source: Getty Images.

Although Anadarko seems to be in slightly better shape than it was a year ago, it's still operating at a loss. The company posted a net loss of $415 million, or $0.76/share. With adjustments, the figure was even worse: a $423 million loss, or $0.77/share. That's much better than the unadjusted $692 million loss from a year ago, but worse than the adjusted $304 million.

Still, revenue is up 26.4% over the prior quarter, and the company has nearly doubled the amount of cash on its balance sheet from 2016 to $6 billion. But the company's $15.4 billion in long-term debt doesn't seem to be going anywhere: in fact, the company added about $150 million this quarter. So, pretty meh.

You can often tell how a company's doing by what the CEO chooses to highlight at the beginning of the earnings call. Anadarko CEO Al Walker led off with how the company has streamlined its operations over the last couple of years, leading to a more favorable product mix. Interestingly, this was almost verbatim what Apache's CEO John Christmann III led with on his company's earnings call.

Contrast those underwhelming openers with ConocoPhillips CEO Don Wallette, who led his good Q2 earnings call by highlighting successful asset sales, debt reduction, and an accelerated share buyback program, and you get a sense of how lackluster Anadarko's and Apache's results were.

Since Walker brought up efficiency, it's important to note that this is an area in which Anadarko has indeed made some progress.

Years of high oil prices meant that companies didn't have to be as choosy about where they made their investments since even plays with high costs of extraction or transportation could still be profitable. With oil prices still hovering around $50/barrel and seeming unlikely to rise significantly anytime soon, smart companies are focusing on high-margin projects and trying to unload the rest.

Anadarko rival Apache has seen success with its efforts to do just that, unloading its Canadian assets to focus on its "Alpine High" find in the Delaware Basin of West Texas. ConocoPhillips recently followed suit. Anadarko has made similar moves, but in different places, selling off its Texas Eagleford Shale assets and Pennsylvania Marcellus Shale assets in Q1 2017 while doubling down on its assets in Colorado's DJ Basin, the Delaware Basin, and offshore in the Gulf of Mexico.

Anadarko's management is being frugal with its cash, and one can hardly blame it. The company announced that it would reduce the midpoint of its capital investments for the year by $300 million. Management still expects to invest about $600 million to expand its onshore midstream capacity but is clearly looking to spend as little as possible.

Anadarko's management clearly intends to be conservative with its future exploration efforts as well. In response to a question about potential international exploration, CEO Al Walker responded that while there were some "things in Colombia" that the company was looking at, on the whole, he planned to focus deepwater exploration on the Gulf of Mexico, where the company already has significant operations, "simply because the tie backs there to provide us a lot of flexibility around the economics and the risk return."

In the current price environment, Anadarko is wise to be looking first and foremost at the most economical exploration options possible, and focusing on its assets that can generate higher returns.

The Colorado mess cost Anadarko both money and production this quarter -- not to mention giving it some unbelievably bad PR. But what's worse for the company is that it can't seem to turn a profit, even with improved quarterly revenues, a more favorable product mix, and asset sales.

Hopefully, the company's efforts to streamline its operations will begin to bear fruit, but until then, Anadarko just isn't looking like a good place for investors' money.