They're running out of cheat codes at GameStop (NYSE:GME). Shares of the leading retailer specializing in video games tumbled 8.6% last week, hitting their lowest levels in five years, after the company posted disappointing financial results.

Profitability wasn't as kind. Those familiar with the model know that it's usually a bad sign when the new hardware category is leading the sales charge, as it's where the chain is afforded the smallest markups. New software and, more importantly, pre-owned sales are where the chunkier margins can be found, and those categories declined 3% and 8%, respectively. GameStop's earnings adjusted for a one-time gain clocked in at $0.15 a share, nearly half the $0.27 a share it scored a year earlier. Analysts were holding out for adjusted income of $0.16 a share, making this a rare miss for the small-box retailer. 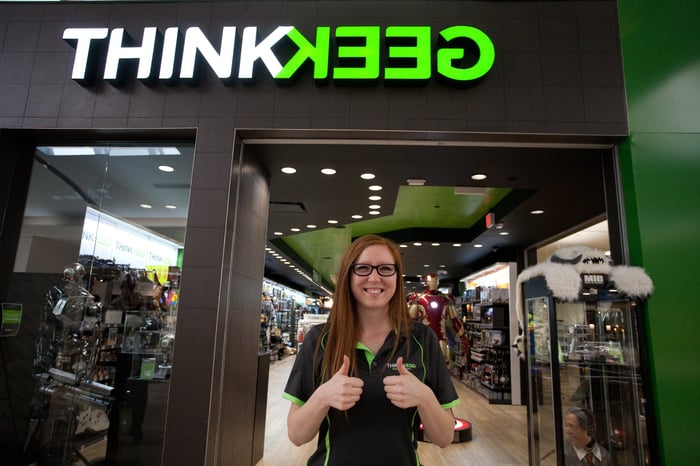 Looking for a game face

GameStop is optimistic for a strong second half to its fiscal year. It sees continuing demand for the Switch console and November's launch of the Xbox One X as strong catalysts to keep big-ticket purchases coming. GameStop still expects to earn between $3.10 and $3.40 a share this fiscal year, and it now sees comps at the high end of its earlier range calling for no change to a 5% decline.

The market wasn't swayed by the positive outlook, as investors saw that strong Switch sales didn't translate into a rise in higher-margin software and pre-owned sales during the second quarter. The stock has hit its lowest level since the summer of 2012, proof that GameStop has credibility issues with growth- and now income-chasing value investors.

Analysts aren't as skeptical. Davie Magee at SunTrust is downplaying the uncharacteristic bottom-line miss, pointing out the the fiscal second quarter tends to be the company's weakest period in terms of seasonality. He's sticking to his "buy" rating. Colin Sebastian at Baird admits that gross margin came in a bit light, but he sees a seasonal uptick that will be enhanced by the Switch and Xbox One X upgrade cycles.

Michael Pachter at Wedbush is encouraged by GameStop's leading market share in Switch hardware and software. He's sticking to his "outperform" rating, but he notes that the uncertainties behind the upcoming Xbox One X and PS4 Pro releases could weigh on the performance of higher-margin categories. Unlike the Switch, which subsists on a steady diet of physical games, the Xbox One X and PS4 Pro come with beefy hard drives ripe for GameStop-bypassing digital delivery.

The stock's decline and GameStop's knack for pushing its payouts higher make this an interesting time for income investors. The yield is now up to a record 7.8%, a development that should bring out some yield chasers betting on the dividend's sustainability. GameStop has a lot to prove, but a bounce off these levels won't be a surprise if it can merely live up to its full-year guidance.