There's a massive makeover taking place at Disney's (NYSE:DIS) Florida resort, which is clear to visitors of Disney's Hollywood Studios. Large chunks of the park are walled off as construction crews build out Toy Story Land, in time for its opening next year, and Star Wars: Galaxy's Edge in 2019.

Disney's Hollywood Studios will be a special place when the new lands are open to the public in two years. It's a pretty fair bet that the place that has been dead-last in attendance among Disney World's four theme parks for the past few years will have a new name by the time that Star Wars: Galaxy's Edge opens in two years. Disney CEO Bob Iger conceded as much at the annual shareholder meeting in early 2015, and the current name doesn't make a lot of sense since the park is no longer a working production studio. 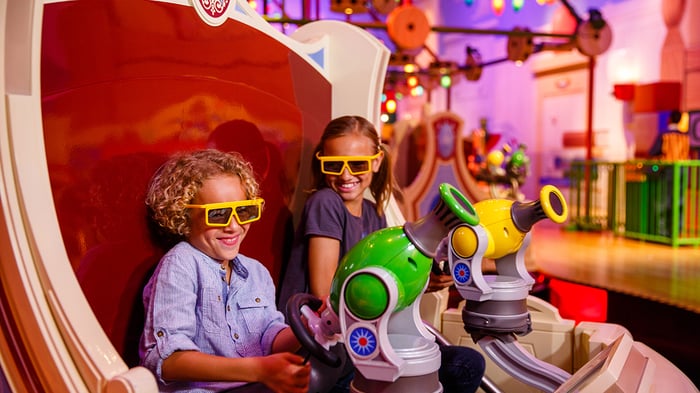 Toy Story Land, Star Wars: Galaxy's Edge, and the Mickey & Minnie's Runaway Railway replacing The Great Movie Ride will nearly triple the number of rides available to guests. The park will reclaim 25 acres of new experiences, which housed attractions that have been demolished in recent years to make room for the update. It will no longer be ridiculed as a half-day park, and a new moniker will help distance the revamped attraction from the hard-hat zone that Disney's Hollywood Studios has become.

Disney's Hollywood Adventure is the name that emerged as an early favorite around the time that Iger made his shareholder-meeting comments. However, a screenshot claiming to be part of a new Disney Parks survey is asking recent visitors to choose their favorites among several brands being considered, and that name is nowhere to be found:

This will be the retheming of Hollywood Studios and possibly new name, via Disney Parks survey. pic.twitter.com/4ENXr72tPs

The new names being considered (according to the survey post) are unusual, to say the least:

Kaleidoscope? Hyperia? The marketing team also seems to lean heavily on the portmanteau, with Storyverse (story+universe), Cinemagic (cinematic+magic), and Cinemagine (cinema+imagine) -- and some of those choices may have trademark disputes. Is Disney XL supposed to be a nod to the company's fledgling Disney XD cable channel?

Disney Beyond would have a nice ring to it, given the new lands going in -- "To infinity and beyond" is a Buzz Lightyear catchphrase, and the name works with the sci-fi nature of Star Wars -- but it would still have the lingering aftertaste of a home-furnishings superstore. Disney Legends sounds more like an ESPN outpost or a historical museum than a theme park.

Disney's Hollywood Studios may not take on any of these new brand names. One of the names that guests are being asked to rank is the gated attraction's current one. However, it wouldn't be a surprise if Disney decides to shake things up by the time Star Wars: Galaxy's Edge opens, and not just because the name change would inspire a land grab of merchandise sales. According to the industry-watching Themed Entertainment Association, the park attracted less than 10.8 million guests last year, 0.5% fewer than came through its turnstiles a year earlier; all three of Disney World's other parks fared better. And this year, if recent trends continue, Hollywood Studios may be passed up by rival Universal Studios Florida in total attendance.

Disney's Hollywood Studios will be an entirely new park two summers from now. It's going to deserve a new name.