The past decade was brutal for American department stores, which were besieged by superstores, off-price retailers, fast-fashion retailers, and e-commerce giants. 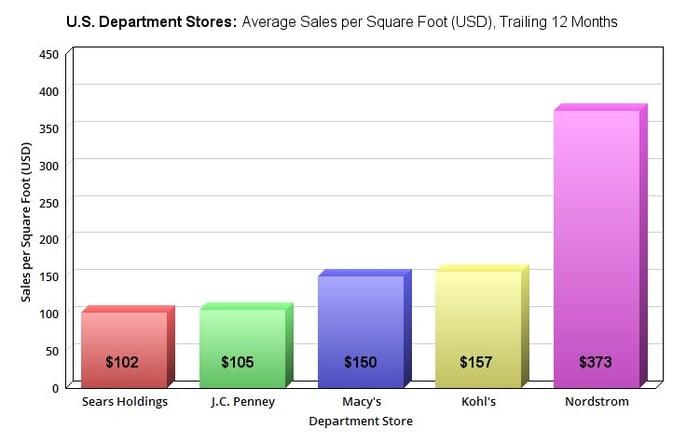 Nordstrom (NYSE:JWN), the priciest retailer of the bunch, is crushing many of its peers, which are in a clear race to the bottom. There's also a correlation between a department store's sales per square foot and its revenue growth: J.C. Penney (OTC:JCPN.Q), Sears (NASDAQ:SHLDQ), Macy's (NYSE:M), and Kohl's (NYSE:KSS) all posted negative sales growth in fiscal 2016, but Nordstrom reported a 2.9% increase.

Nordstrom's average stores are also smaller than the average Sears, J.C. Penney, or Macy's store. Selling pricier products within smaller spaces boosts a retailer's productivity -- that's why Apple Stores generated a whopping $5,435 in sales per square foot over the past 12 months. Unless American department stores shrink their footprints, they'll keep struggling to boost their overall productivity.