A look at why the construction and mining machinery stock has surged higher this year and whether its run can continue.

Caterpillar Inc. (CAT 0.19%) investors have enjoyed watching their stock appreciate nearly 24% in 2017 and 38% in the past year, so perhaps now it's time to take a step backward and look at just what's happened to propel the price higher. The construction and mining equipment company has outperformed the S&P 500 by some 15% this year, so clearly there's something stock-specific going on.

I have three reasons for what we've seen: 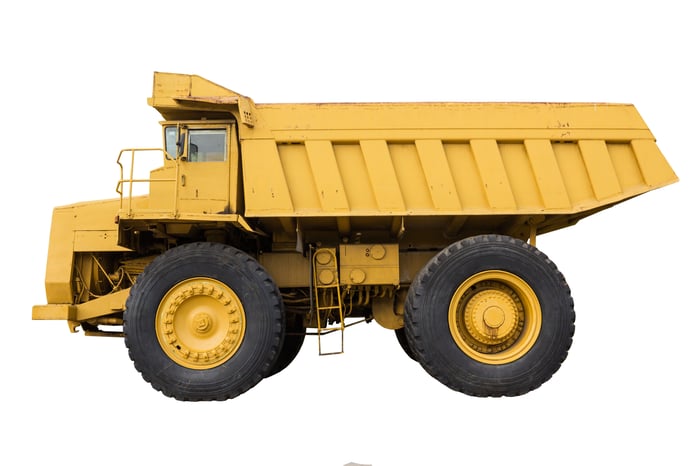 Since early 2016, the market has been pricing in a cyclical recovery in the industrial sector. U.S. industrial production spent most of 2015 and 2016 in negative territory, only to turn positive at the end of 2016.  As ever, the market is good at anticipating a recovery, and companies with significant energy exposure -- one of the hardest hit subsectors within the industrial sector -- notably outperformed. Among those companies: Dover Corp. (DOV 0.70%) and Caterpillar. 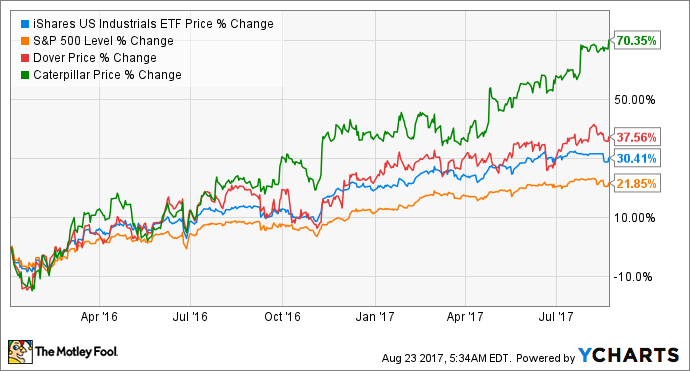 However, while the market is busy pricing in a recovery, it's still important for companies to manage expectations. For example, General Electric Company has arguably been guilty of being too optimistic regarding its oil and gas segment prospects, while Dover Corp. has been raising guidance in 2017 and has aggressive plans to increase revenue and profits that could result in a nearly 50% increase in segment operating profit from 2016 to 2019.

Turning back to Caterpillar, the following table shows how management's guidance and commentary have changed since December. Revenue and earnings expectations have dramatically increased, and it's at least partly due to management's downplaying expectations and then beating them. Here's a look at 2017 guidance.

While it's arguable that Dover Corp. and Caterpillar have been overly conservative with guidance, their end markets have been stronger than expected in 2017. Readers already know how Caterpillar makes money, and management raised full-year sales growth guidance for all three segments in the second-quarter earnings presentation. Here's a look at revenue growth in 2017.

In particular, China's GDP growth of 6.9% in the first half of 2017, compared with 6.7% in 2016 and its government's target for around 6.5% in 2017, buoyed Caterpillar's construction sales, and the ongoing recovery in metals pricing has helped improve prospects for new equipment sales in the resources segment.

Finally, positive-looking leading indicators give the market confidence that Caterpillar's cyclical recovery can continue. As China's GDP growth has beaten expectations so far in 2017, analysts have been nudging the country's GDP growth estimates higher.

Meanwhile, metals prices continue to rise, while oil prices appear to have stabilized. And one leading indicator of U.S. industrial output, the Institute for Supply Management's manufacturing new orders index, remains firmly in growth mode -- a reading above 50 indicates growth. 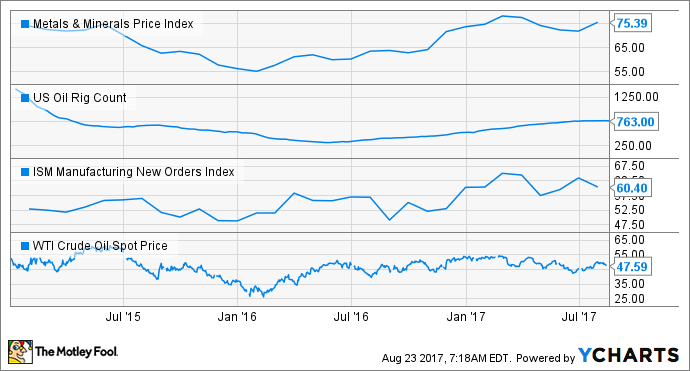 Adding all these factors together, it's clear why Caterpillar has soared in 2017, but can it continue in the near future? The answer lies in the outlook for resources and energy capital spending, and that largely depends on price movements for key commodities such as copper, coal, and oil. As long as they remain high enough to justify capital spending, Caterpillar is likely to do well, but if they stagnate, then Caterpillar's strong run could end.