Shares of Ulta Beauty (NASDAQ:ULTA) stumbled 9% on Aug. 25 after the beauty retailer released its second quarter earnings report. That decline was surprising, since Ulta beat analyst expectations on both the top and bottom lines. 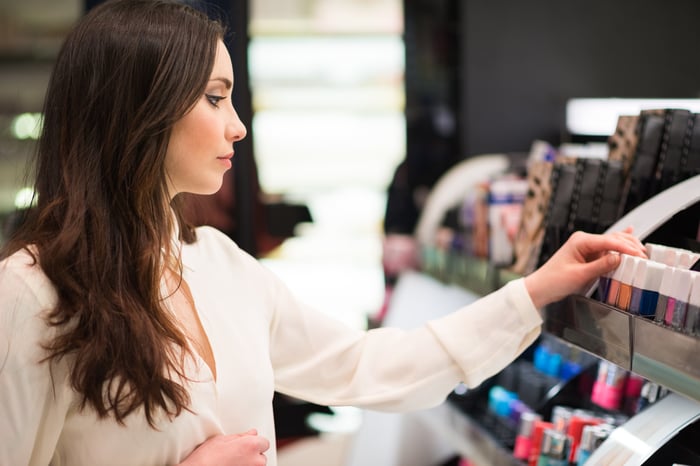 Ulta's second-quarter revenue growth initially looks good, but it actually marks its slowest growth rate in eight quarters. Its comparable-store sales rose 11.7% -- fueled by 5.5% growth in number of transactions and 6.2% growth in its average ticket -- but it was the first time in over four years that Ulta didn't beat the high end of its own guidance.

For the current quarter, Ulta expects comps to rise just 9% to 11%, compared to 16.7% last year. Analysts expect Ulta's revenue to rise 23% this year, then drop to 14% growth next year.

2. Enemies at the gates

The biggest problem for Ulta is rising competition. BMO Capital analyst Shannon Coyne recently reported that a survey of 500 respondents found that shoppers prefer Ulta over LVMH's (NASDAQOTH: LVMUY) Sephora "based on proximity" -- but it could lose that edge as Sephora expands to off-mall sites. Coyne also warns that Macy's (NYSE: M) expansion of its Bluemercury luxury beauty retailers and spas could throttle Ulta's growth.

Wal-Mart (NYSE: WMT) and Amazon (NASDAQ: AMZN) are also potential threats. Wal-Mart is reportedly in talks to acquire the subscription-based beauty retailer Birchbox, which sends four or five samples of prestige and niche beauty products to customers for $10 per month. Amazon recently partnered with L.A.-based beauty emporium Violet Grey to sell curated selections of its products, which could bring additional prestige and indie beauty brands to its e-commerce platform. These new options could all capture the attention of Ulta's shoppers.

Analysts currently expect Ulta's earnings to rise 29% this year but drop to 18% growth next year. Ulta's trailing price-to-earnings ratio of 30 and forward P/E of 26 are lower than the industry average of 45 for specialty retailers, but they're both higher than the company's earnings growth rates.

Analysts expect Ulta's earnings to grow at an average annual rate of 19% over the next five years. That gives its stock a PEG ratio of 1.3. Since a PEG ratio under 1 is considered "undervalued," Ulta doesn't look cheap relative to its earnings growth potential.

4. Premature buybacks and a lack of insider confidence

When high-growth companies start running out of room to grow, they often buy back stock, which boosts earnings per share by lowering the number of shares. That's precisely what Ulta did in March, introducing a buyback authorization of $425 million. At the end of July, it had $268 million remaining in that plan. But the buyback so far have proved to be ill-timed since Ulta shares have dropped 23% over the past six months. Insiders also don't seem confident in Ulta's prospects -- they sold 1.22 million shares on the open market over the past 12 months, but only purchased around 48,000 shares.

There are still bright spots, though

Ulta still has plenty of strengths. Its digital ecosystem is expanding, and total e-commerce sales rose 72% to nearly $100 million in the second quarter. Meanwhile, salon sales increased 15.3% to $68 million in the second quarter. Its margins are expanding, and it's still opening new stores as other brick-and-mortar retailers shutter weaker locations.

However, investors who expect Ulta's stock to more than double again as it did over the past three years could be disappointed as its growth gradually slows down.