Unprecedented rains and flooding from deadly Hurricane Harvey, which hit a number of Texas cities including Houston and Corpus Christi over the weekend, are still occurring. The extent of the damage is as yet unknown but is expected to run into the tens of billions of dollars.

Obviously, the storm's effects on the stock market are of far less concern than its impact on its victims, and investors' financial worries pale in comparison to the tremendous losses many of the people of Texas are suffering right now. But as Harvey moves out of the area, it's important for investors to be prepared for what they will find in their portfolios as cleanup begins. 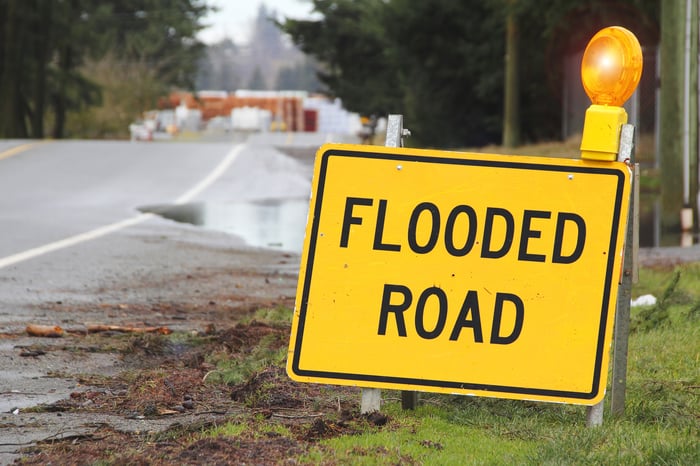 Hurricane Harvey has flooded the Houston area, disrupting the oil and gas industry. Luckily, these disruptions are likely to be short-lived. Image source: Getty Images.

As Harvey approached the Gulf Coast, companies were forced to take immediate preventative measures. These included shutting down refineries on the Texas Gulf Coast, where more than 25% of the nation's refining capacity is located.

ExxonMobil shut down its Baytown refinery in Houston, the second-largest refinery in the country, which processes 560,000 barrels of oil per day.  Other major refineries, like Marathon Petroleum's (NYSE:MPC) Galveston Bay refinery (460,000 barrels a day), were operating on reduced capacity as floodwaters and unsafe conditions prevented employees from reaching work. Overall, Harvey knocked out more than 10% of the country's refining capacity.

Besides refineries, many offshore oil platforms in the Gulf of Mexico had to be evacuated to ensure worker safety or shut down due to pipeline issues. Anadarko, for example, had to evacuate four of its 10 Gulf platforms and shut down four more. As of Friday, the U.S. Bureau of Safety and Environmental Enforcement said workers had been removed from 86 of the 737 manned oil and gas platforms in the Gulf. Onshore operations were also affected: ConocoPhillips ceased all of its operations in the inland Eagle Ford Shale.

The storm wasn't just a concern for industrial facilities. Companies whose headquarters are located in or near Houston were forced to close their administrative offices due to flooding. Apache announced its Houston office would be closed on Monday, but that it would "provide regular updates." Although Anadarko's headquarters in The Woodlands, just north of Houston, "has not been significantly damaged to date by the storm," according to a company press release, Anadarko was shutting down its offices "until further notice" in response to the flooding. Shares of both companies dropped in response.

It may be days, weeks, or -- in the case of hard-hit refineries -- even longer before inspections and cleanup can occur and normal operations can resume. But the good news is, they will almost certainly resume, and so any disruptions in stock price should be temporary.

Much of the coverage of Harvey's impact on the oil and gas industry has focused on the rise in gasoline prices that the storm has caused. Estimates ranged from $0.05/gallon increase to more than $0.25/gallon. You might think that would be good news for oil companies. But it's more complicated than that.

You see, those higher gas prices aren't caused by a spike in crude oil prices. In fact, oil prices -- especially West Texas Intermediate -- have dropped over the last week as Harvey approached. That means that companies that exclusively produce oil, like ConocoPhillips, Apache, and Anadarko, aren't seeing any benefit.

The primary beneficiaries are actually oil refiners. That might seem counterintuitive, considering it's the refineries that were shut down due to the storm. But refiners make money off of what's known as the crack spread, which is the difference between the price of unrefined crude oil and the price of refined products like gasoline. With the price of oil down and gas prices up, the crack spread increases, which means a big payday for refiners.

Already, Marathon Petroleum -- despite the reduced capacity at Galveston Bay -- has seen its stock rise more than 5% since Aug. 22. Shares of HollyFrontier, which operates five refineries -- none of which are anywhere near the Gulf of Mexico -- have risen more than 15% during that time.

Big integrated majors like ExxonMobil are unlikely to see any substantial effect from the storm. Because they are big international companies, U.S. refining only accounts for a tiny fraction of their overall revenue. Exxon, for example, has derived less than 10% of its 2017 earnings so far from overall U.S. downstream activities, which includes refining.

But the most important thing to know is that all of these changes are likely to be temporary.

As big a disaster as Hurricane Harvey seems likely to be, it's important for investors not to make hasty buy or sell decisions in response. The reactions to past disasters shows that most effects on stock prices tend to be temporary.

After Hurricane Katrina in August 2005, for example, stocks of companies like ExxonMobil, Apache, and Anadarko spiked. But by mid-October, all three had dropped below their pre-Katrina levels. June 2001's Tropical Storm Allison -- which, like Harvey, flooded Houston -- had similarly short-lived effects.

The bottom line: Keep a cool head and base your buying and selling decisions on stocks' fundamentals as opposed to news headlines. Remember that you're investing for the long term, and even major natural disasters tend to have short-lived effects on the market. That said, if a disaster drives a cheap stock further into bargain territory, there may be a compelling reason to pick up some shares.