Indian investors are having a great year. The sub-continent's economy is booming, bolstered by economic reform and investment from the central government, and stocks are following suit. As measured by iShares MSCI India ETF (NYSEMKT:INDA), India-based shares are up 25% year to date. Shares of tech and outsourcing leader Infosys (NYSE:INFY), on the other hand, have been an exception. 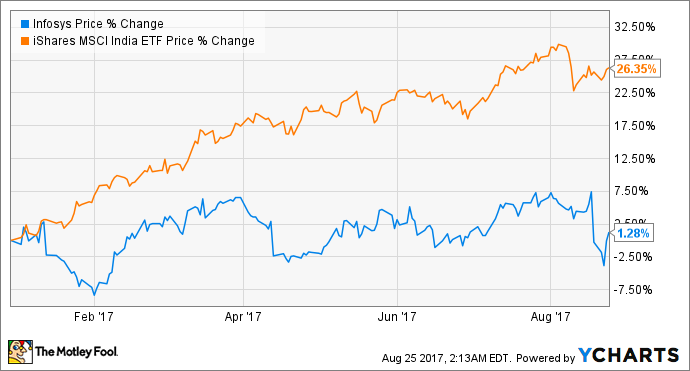 The business, which specializes in tech consulting, software development, and other outsourcing services, has been grappling with a changing industry landscape. Whereas other India-based companies are riding the wave of economic growth, Infosys is exposed to disruptive new technology and shifting political and social sentiments around the world. It is against this backdrop that CEO Vishal Sikka announced his departure last week. 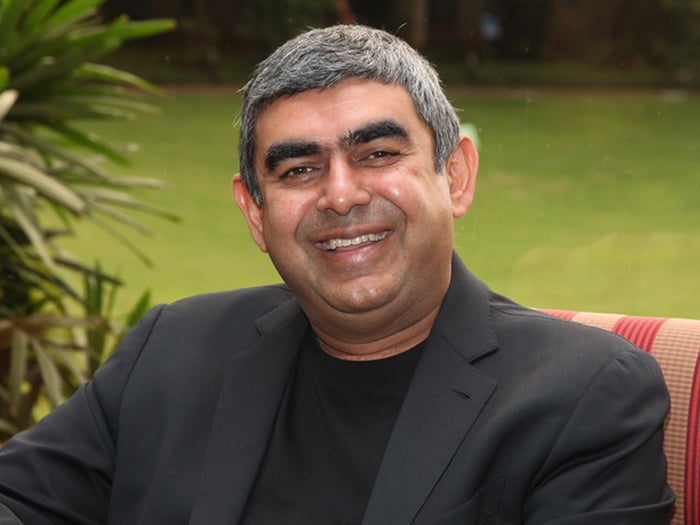 Outsourcing firms have been under fire in the last year. In years past, criticism has come mainly from workers in economies that have lost jobs to cheaper geographies like India.

With the election of Donald Trump, though, legislation is being kicked around in the U.S. at reforming the H-1B visa program -- used to fill high-skilled job openings with a foreign worker. That program has been used by Infosys and other technology outsourcing firms over the years, and has helped create a burgeoning high-tech workforce in India. The argument goes that companies have been abusing H-1B visas by bringing in lower paid workers from out of country rather than higher a local but higher-cost employee.

I'll leave the political debate for other to discuss, because a much bigger disruptor for outsourcing firms like Infosys has been technological advancement. Infosys built its business on providing a cheaper alternative workforce for what has been labeled mundane or time-intensive tasks (think, for example, of call centers and other types of customer service). As the world has changed, the company has morphed into a tech consultant and developer as well.

However, automation has entered the picture, and things like artificial intelligence (AI) and machine learning have begun to replace the need for humans to perform many of these tasks. It has thus been another period of transition for Infosys as it tries to fit these new technologies into its business of outsourced cost savings.

Why Sikka called it quits

In the three years at the helm of Infosys, Sikka has helped transform the service-based business into a new type of technology company. He is responsible for launching several dozen new services, including new AI and other software as a service-style platforms.

The switch to a more technology-centric organization has paid off. Since 2014, Infosys revenue has been back on the rise again, all the while keeping its global employee base of nearly 200,000 intact. So much for robots taking jobs.

Not everyone has been happy with the results, though. Infosys founder and former chairman Narayana Murthy has been on the attack all year, taking aim at everything from Sikka's compensation to the way the current board is governing the company. Murthy and the other co-founders still own 13% of Infosys, so what they say still carries a great deal of weight.

Citing the above political and social issues, as well as new technologies disrupting the industry, Sikka handed in a letter of resignation on August 18. The real issue may have been more personal, however, as Sikka said attacks against him have been "malicious and increasingly personal." The resignation is effective immediately, but Sikka will remain Executive Vice Chairman until a replacement is found no later than March 31, 2018.

In a letter to shareholders, Infosys' board of directors said it regretted Sikka's decision to step down and is "profoundly distressed by the unfounded personal attacks on the members of our management team." This sounds like a battle over Infosys and its current transformational business strategy may be gearing up between the current board and the old co-founders.

This could be a dangerous fight for shareholders. I'm never one to sell after a big plunge in share price, as initial reactions to events can often times be overblown. But shareholders should be aware that the stock could fall further if this battle doesn't go quietly, specifically if the management team and its goal to transform the company into an innovation-first organization loses out to the co-founders.