McDonald's (NYSE:MCD) has been an up-and-down proposition for shareholders for the past few years.

The company was surpassed for a time by fast-casual restaurants that offered higher-end food, at reasonable (but not cheap) prices. McDonald's also hurt franchise-owner margins through its Dollar Menu and other discount plans.

For a long time, the chain seemed to not know how to react. It responded to the fast-casual craze by offering healthier foods its core patrons didn't want. It also cut back on discounts. But it generally lacked a cohesive, long-term turnaround strategy. Even successful plans such as all-day breakfast proved to only be partial solutions, and efforts to sell more coffee and beverages have not yet made a major difference.

That all changed for the company in March, when it released its Velocity Growth Plan. This new blueprint for success includes improving the chain's food, but that's not its core focus, and shareholders should be very excited about it. 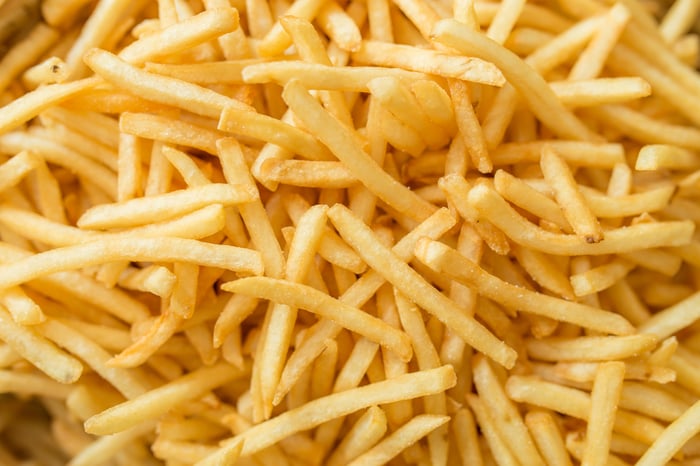 Food, like its famous fries, is only a piece of the puzzle for McDonald's. Image source: Getty Images.

The Velocity Growth Plan lays out the chain's efforts to make technology, convenience, and delivery a core part of its offering. The technology part involves putting ordering kiosks in stores and offering mobile order and pay through its app. It also includes an improved drive-through experience and a big bet on delivery.

Even though anyone who has eaten McDonald's food more than a few minutes after it was made might question its viability for delivery, consumers don't seem to mind. CEO Steve Easterbrook laid out how it has worked so far, in a press release about the company's adding delivery to 1,500 more U.S. stores.

"We are encouraged by early results in the U.S where delivery is resonating well, particularly with our younger customers," he said. "Nearly 60% of orders are being placed during the evening or late night, providing our franchisees an opportunity to grow dayparts. And because speed matters, we're getting food from order inception to the customer's door in less than 30 minutes, on average."

The chain has learned a lesson that Domino's (NYSE:DPZ) has long understood. Its customers want familiar food fast, with as little hassle as possible. It's a model that the pizza chain has proven over and over again. People prize convenience over quality, and McDonald's has decided to invest heavily in being really convenient.

McDonald's won't succeed by chasing food trends. It has committed to serving fresh beef in quarter-pound burgers by mid-2018 and making other menu changes, but food has generally not been the reason the company has succeeded.

Instead, the company will beat its rivals by making it really easy to get a Big Mac, Chicken McNuggets, and its other products. In-store kiosks will allow for more personalization with less risk of error. App-based ordering will do the same, and delivery makes it so that anyone can get a McDonald's fix without doing very much.

That doesn't mean McDonald's will stop innovating. Its higher-end Signature Crafted line has succeeded, and the chain still believes it has an opportunity with coffee and other beverages. However, that will be the icing on the cake.

McDonald's needs to have its food meet minimal consumer standards, which do change over time, but beyond that, its audience expects little more than consistency. The company can deliver that while also offering top-tier technology that may not quite match Domino's emoji-based ordering, but it could come pretty close.

Why McDonald's Corp. Shareholders Have Nothing to Worry About @themotleyfool #stocks $MCD $DPZ Next Article
Current