Bitcoin Investment Trust, the readily available way for U.S. investors to take a flier on the popular cryptocurrency via their brokerage accounts, is again trading at twice the value of the bitcoin it holds.

Speculators are paying high prices to bet on bitcoin. At the market close on Tuesday, Bitcoin Investment Trust (GBTC -8.56%) traded at a price 101.6% higher than the actual market value of the bitcoin it holds.

That's not a misprint. Shares ended Tuesday at $832.99, even though the value of the bitcoin backing the trust was valued at just $413.16 per share on bitcoin exchanges.

Over the 28 months or so of its existence as an over-the-counter stock, Bitcoin Investment Trust has closed at a premium to net asset value on 589 days. Only once has it traded for a discount: It happened back in 2015, when the closing price valued the trust at a microscopic 0.1% discount to the underlying value of its bitcoin.

Premiums this large, though, have been a rare occurrence for Bitcoin Investment Trust, as you can see in the chart below. 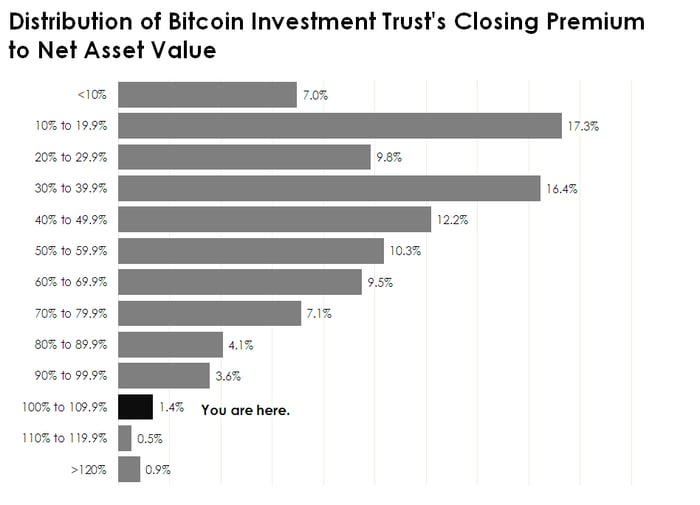 Something of an anomoly

In properly functioning markets, large premiums to net asset value are whittled away by arbitragers. Arbitragers short the asset trading at a premium (Bitcoin Investment Trust) and buy an equal amount of the underlying asset (bitcoin) at market price.

For example, one might short 100 shares of Bitcoin Investment Trust, and then buy 92.58535 bitcoin. In that situation, the fluctuations in bitcoin are largely irrelevant to the arbitrager: What matters for them is whether the premium increases or decreases. The only way an arbitrager loses is if the premium never closes, closes too slowly, or if the premium expands so rapidly that the arbitrager faces a margin call on his or her short position.

The problem is that most shares of Bitcoin Investment Trust appear to be in the hands of individual investors, who are unlikely to keep their shares in margin accounts, and even less likely to lend out their shares to short sellers. According to data reported by OTC Markets, only 29,293 shares were sold short as of July 31, 2017. Data from Interactive Brokers suggests that it had only 9,000 shares in inventory to short at that time. These figures are tiny relative to the roughly 1.8 million shares reported to be outstanding earlier this year. 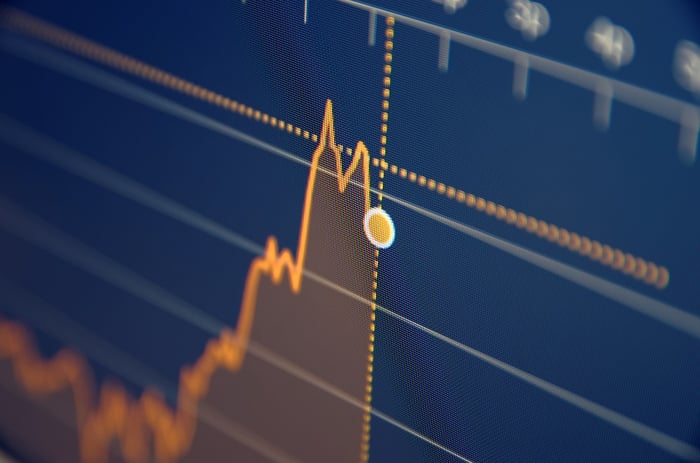 Interestingly, Bitcoin Investment Trust's premium to net asset value seems to be an American-only phenomenon. Overseas, on Nordic exchanges, appetite for bitcoin has been met with an exchange-traded note, which mirrors the changes in bitcoin without substantial premiums or discounts. Of course, given the fact it trades overseas, it's unlikely to steal any significant retail demand from a trust that trades over the counter in the United States.

Eventually, it's my view that Bitcoin Investment Trust's premium to net asset value will go extinct, as a true exchange-traded fund for bitcoin fixes the supply and demand imbalance, investors discover alternatives to buy bitcoin at the market price, or the love affair with all things bitcoin simply dies down. Or some combination of three -- these things aren't mutually exclusive.

No matter how it happens, a shrinking premium will mean pain for Bitcoin Investment Trust's shareholders, who would be more likely to get returns lower than they would if they owned bitcoin directly. Historically, the trust has traded at a median premium of about 40%. Barring a change in the value of bitcoin itself, the share prices of the trust would have to fall by approximately 30% to revert to the median.