Although US Concrete (NASDAQ:USCR) is a relatively boring stock, it has rewarded investors with a 660% gain since launching onto the public markets in late 2010. A steady stream of acquisitions has been a major driver of growth in that span, while the timing of dozens of major urban construction projects has helped as well.

On one hand, the company has a top-three position in each of its major markets, which include New York, Washington, Dallas-Fort Worth, and San Francisco. That may hint that growth won't be as easy to come by in future periods. On the other hand, the company boasts a market valuation of just $1.1 billion. That may hint that there's plenty of room to expand into various new ready-mix concrete markets across the nation.

So, can US Concrete be a growth stock? 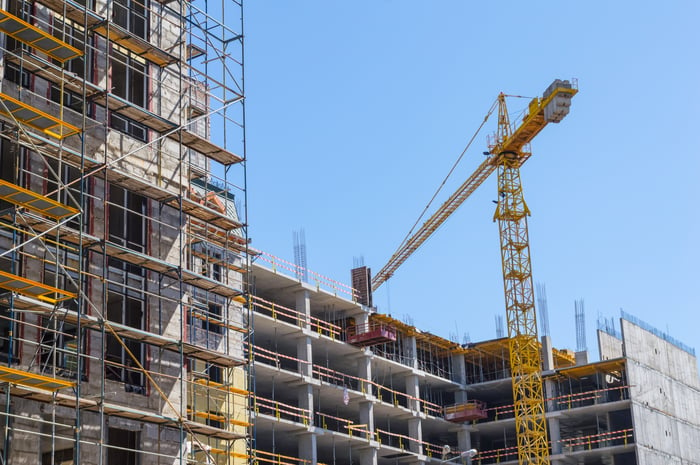 Driven by expansion in its major operating markets, US Concrete grew revenue 95%, operating income 241%, and operating cash flow 367% from 2013 to 2016. And that momentum hasn't shown any signs of slowing recently. In the second quarter of 2017, the company reported 24% growth in revenue compared to the year-ago period.

For its volumetric and ready-mix concrete portfolio, US Concrete now owns 172 production facilities and 1,700 mixer trucks. That's a formidable force to be sure, which has no doubt aided the company in winning high-profile bids such as Freedom Tower in New York City and the new arena for the Golden State Warriors in the Bay Area.

That brings up an important point: US Concrete generates a significant share of its overall business from high-margin commercial projects. In the last 12 months, approximately 58% of total revenue was sourced from commercial and industrial markets, compared to just 26% from residential applications and 16% from highways and other public-works projects. That has helped the company run laps around peers when it comes to returns on invested capital and the margin spread calculated from material costs. 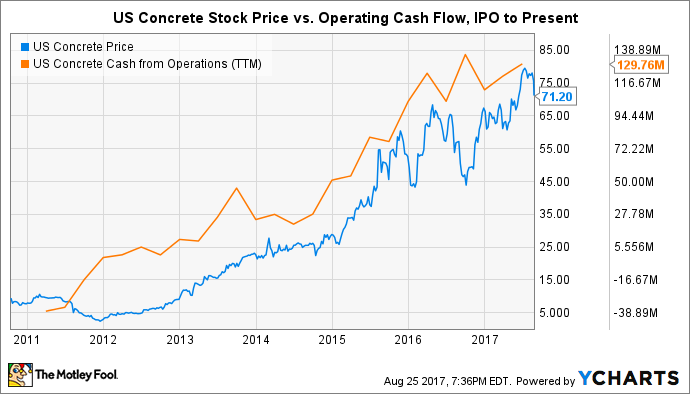 Plus, there are still opportunities for growth in each of its core markets. For instance, US Concrete still isn't vertically integrated in the Bay Area or Washington. Not only are those two metro areas going on major building sprees in the next few years, but they also boast some of the strictest environmental building regulations in the nation. That marks a potential opportunity for the company's low-CO2 cement technology, which could grow considerably in years to come in all major markets.

Cement and concrete production accounts for a staggering 5% of global CO2 emissions. US Concrete's EF Technology substitutes the most carbon-intensive components of cement with byproducts from other industrial processes. The result: up to a 46% reduction in CO2 emissions. Every major commercial project in the Bay Area has already used the new product -- the San Francisco 49ers' new stadium, the new Facebook campus, the new Workday campus, and the Oakland Bay Bridge, to name a few -- and other markets aren't far behind.

Investors shouldn't doubt the opportunities for organic growth. However, investors need to be aware that construction markets, like the broader infrastructure space, are cyclical. US Concrete is slightly insulated from this risk in the sense that projects being completed today were bid on years ago. That also gives it relatively good insight into pipeline projects that will begin in the near future, and whether or not they get started or canceled.

The problem is that cyclical downturns do happen -- and it can take years for cement and concrete producers to recover. 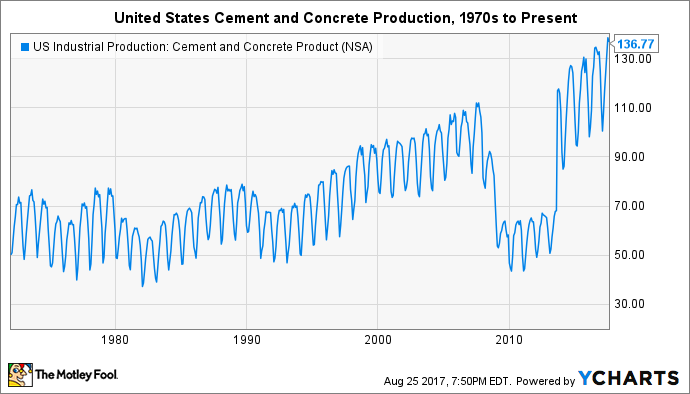 US Industrial Production: Cement and Concrete Product data by YCharts.

The good news is that the Great Recession was (hopefully, likely) a once-in-a-lifetime event. Most recessions aren't accompanied by such severe consequences for economic growth and investment. Additionally, US Concrete is confident that the current part of the construction cycle has yet to peak, and may have even been extended by a year or two. That buys the company even more time to expand and grow.

Then again, investors should consider that the stock's amazing 660% return since its IPO was heavily influenced by timing. After all, US Concrete caught the bottom of the cement and concrete production cycle in 2010 and has ridden it to today's all-time highs. Gains of such magnitude won't happen in a seven-year period, well, perhaps ever again.

I think it's wise to take the middle road when evaluating the growth potential for this stock. Investors should be fairly confident that US Concrete has room to grow in its core metropolitan markets through acquisitions, additional high-margin commercial projects, and the expansion of its low-CO2 products. Investors can also be fairly certain that future growth won't be achieved overnight as has been the case in the stock's short life as a public company.

That said, I do like US Concrete stock as an under-the-radar growth stock for the long haul, especially if the price goes lower during the next recession.