Shares of Vera Bradley (NASDAQ:VRA) slumped on Wednesday after the company reported its second-quarter results. Vera Bradley beat analyst estimates across the board, and the stock initially jumped when the market opened. But that gain quickly turned into a loss, possibly due to management changes announced during the conference call and a lackluster update on the company's turnaround progress. At 3:30 p.m. EDT, the stock was down about 10%.

Vera Bradley reported second-quarter revenue of $112.4 million, down 5.7% year over year, but about $0.7 million higher than the average analyst estimate. Direct revenue rose 2.4% year over year, to $89.3 million.

Comparable-store sales slumped 4% and comparable e-commerce sales slumped 4.9%, but those declines were more than offset by new stores. Indirect revenue dropped 27.9% year over year, to $23.1 million, driven by a reduction of specialty accounts. 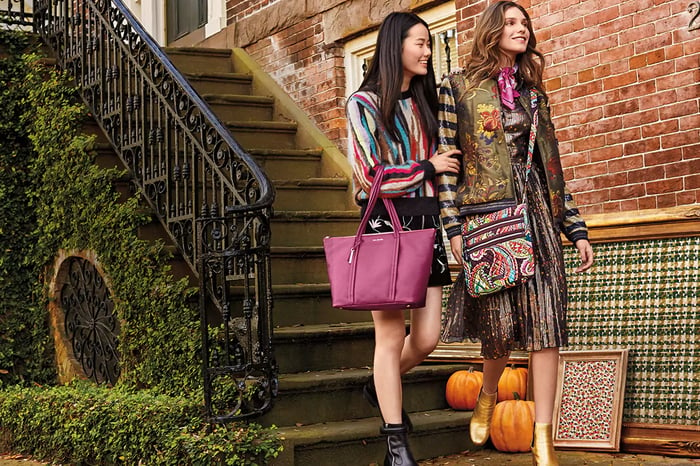 Non-GAAP earnings per share (EPS) came in at $0.13, down from $0.18 in the prior-year period, but $0.03 higher than analysts were expecting. Gross margin dropped 1.1 percentage points year over year, to 56.3%, mostly due to increased promotional activity, a reserve taken against slow-moving inventory and channel-mix changes.

While Vera Bradley beat expectations, there were two things that may be contributing to the stock's decline. First, the company announced during the conference call that founder Barbara Bradley Baekgaard will take on a smaller role after the chief creative officer position was given to current VP of Design Beatrice Mac Cabe.

Second, the company admitted that its turnaround progress has not been fast enough, given the challenging retail environment. The company plans to take a more aggressive approach going forward, and it expects various initiatives to knock down revenue by $40 million to $50 million in fiscal 2019.

With revenue and profit slumping, and with more pain expected ahead, investors overlooked Vera Bradley's better-than-expected results and pushed the stock lower.