Ambarella Inc. (NASDAQ:AMBA) released strong fiscal second-quarter 2018 results on Thursday after the market closed, with both revenue and adjusted gross margin arriving above the midpoints of the company's latest guidance. And while Ambarella also offered better-than-expected guidance for the fiscal third quarter, it simultaneously reduced its outlook for the full year.

So after initially climbing as much as 3%, shares of the video processing chip specialist plunged in after-hours trading. Let's take a closer look at what Ambarella accomplished over the past few months, as well as what investors can expect from the company going forward. 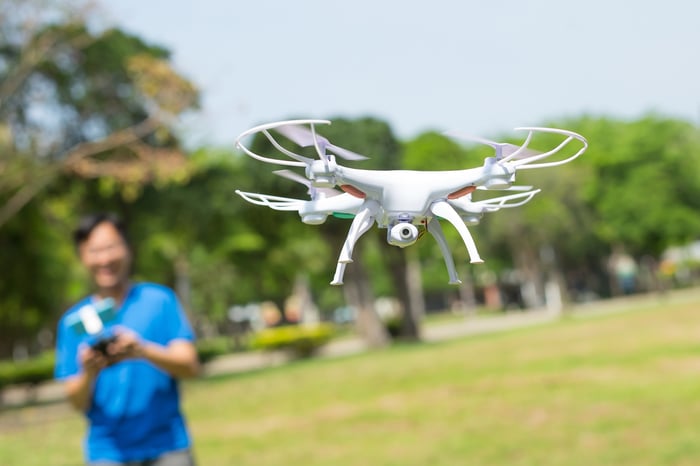 During the second quarter, we had solid growth from IP security, both from professional and home monitoring camera markets. We also continued to see growth in our OEM auto business, with strong design win activity and revenue from OEM auto video recorders. We continue to invest in the technologies required to deliver future generations of highly intelligent, HD and Ultra HD cameras with particular emphasis on high performance computer vision functionality. We see computer vision as a key differentiator for us in camera markets, including automotive, IP security, drones and robotics, and it is our key area of focus for the future.

For the current fiscal third quarter, Ambarella expects revenue of between $87.5 million and $90.5 million, representing a year-over-year drop of between 12.9% and 10%, but roughly in line with consensus estimates. This range also assumes growth in non-GoPro revenue of between 4.9% and 9.4%. Trending toward the bottom line, Ambarella expects fiscal third-quarter adjusted gross margin to remain steady at between 62% and 63.5%.

During the subsequent conference call, however, Ambarella management stated it now expects full fiscal-year 2018 revenue to be down 3% to 7% from the prior year, representing a reduction from their previous forecast for revenue to be roughly flat from last fiscal year, plus or minus 3%.

According to CFO George Laplante, the blame for that reduction lies with a combination of lower-priced drones impacting the premium drone segment, continued weakness from Tier 2 drone customers, lower-than-expected growth from the newer virtual reality market, and a recent shortage of certain memory components that could impact camera build schedules for certain customers. Incidentally, Laplante added the latter culprit will be partially offset by higher-than-anticipated revenue from GoPro in the second half. But all told, non-GoPro revenue growth for the year is now expected to be a modest 9% to 12%.

In the end, these impending challenges were more than enough to offset Ambarella's largely positive fiscal second quarter, and it's no surprise to see the stock pulling back in response.