Tech investors scanning the horizon for potential investments have likely come across the point-of-sale and payment processing company Square (NYSE:SQ). The company's share price is up a staggering 105% over the past 12 months, and its easy-to-use hardware and software is converting small businesses left and right.

Square's revenue spiked nearly 26% in its second quarter and about 24% in the first six months of this year, but how exactly does the company make its money right now? Let's take a look. 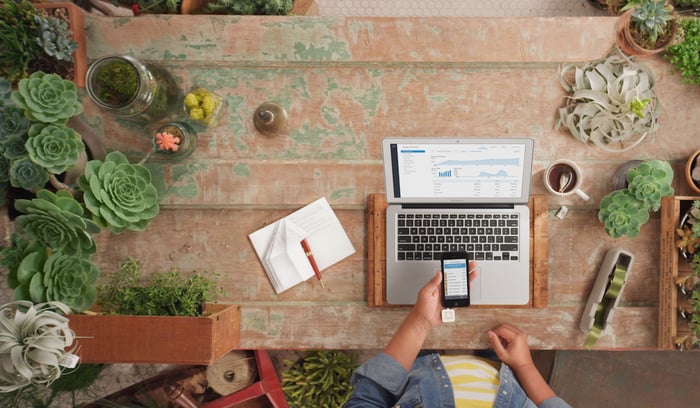 Where the company's revenue comes from

Square has a growing list of services that include everything from payroll services to small business loans, but by far the company's largest revenue stream comes from the fee it charges for point-of-sale and mobile transactions. Essentially, any time a customer buys something using a credit or debit card on Square's platform, it receives a small percentage of that sale.

Here's what the company's revenue streams looked like in the second quarter of 2017:

Square charges a flat fee for each transaction made through its platform, which range from 2.75% for all payments made with a card to 3.75% plus $0.15 for payments made by manually typing them into Square's software. The transaction-based revenue grew by 32% year over year in the second quarter, which helped push up Square's total revenue by 25.7% year over year.

Square also measures how much its business is growing by using a metric called gross payment volume (GPV). GPV is how much people like you and me spend through all of Square's mobile and point-of-sale kiosks. The company's GPV grew by 32% year over year in the second quarter, which indicates that Square is gaining more customers, and that more transactions are happening on its platform.

The GPV is worth paying attention to because it allows investors to understand how the company is gaining traction among larger customers. For example, at the end of the second quarter, Square had expanded customers in the $500,000+ GPV category -- from 14% of its customer mix to 19% -- which means it's attracting larger businesses. 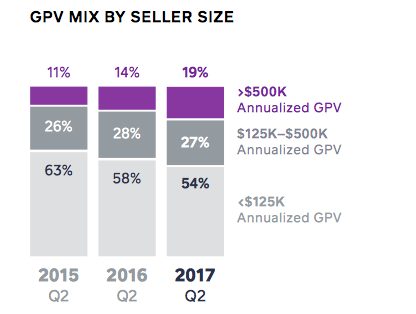 Knowing where Square makes its money is important for potential investors, but whether or not the company is profitable is clearly important as well. The short answer is that Square isn't profitable yet, but it's getting close.

Square might seem like an odd bet considering there's a plethora of banks and other payment processing investments to choose from, but this fast-growing company is beginning to etch out its own niche in the payment space, and it's building a solid ecosystem to retain customers. Investors need to see this company growing at a furious pace as it continues to build out its brand and add new customers, but Square's increasing transaction-based revenue and rising GPV prove that Square is moving in the right direction.

How Square, Inc. Makes Most of Its Money @themotleyfool #stocks $SQ Next Article
Current