The property insurance market, more commonly referred to as the property and casualty or P&C market, comprises all the major insurance services outside of health and life insurance. As you might expect, it's a huge slice of the insurance industry: The U.S. P&C market alone is estimated at $618 billion annually.

Following the financial crisis of 2008, the global P&C market has remained in slow growth mode for over a decade, with premium writing (the industry's primary source of income) averaging 2% expansion a year.

However, as emerging economies are finally picking up momentum, and major economies including the U.S. and Japan exhibit moderate growth, prospects for P&C are improving. According to a recent report by global reinsurance giant Munich Re, premium writing expansion in the global P&C industry will average 4% this year and in 2018 as well. In this article, we'll look at two top dividend-issuing P&C companies that are already thriving, while showing promise of continued success within a more vibrant industry outlook.

A well-run insurer with room to improve earnings 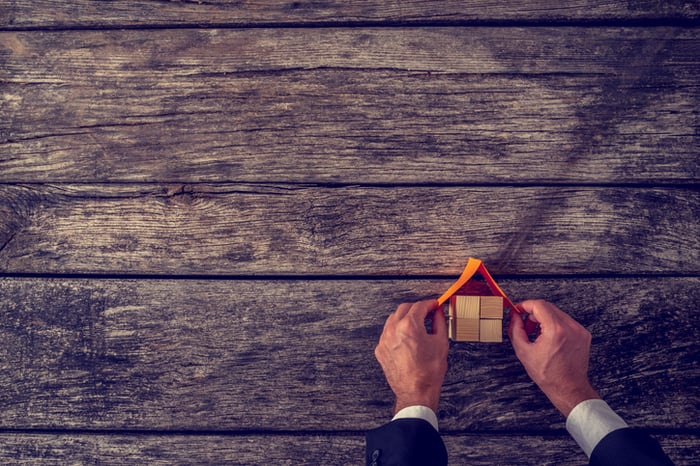 According to its most recent annual report, Chicago-based CNA Financial Corp. (NYSE:CNA) is the nation's 14th-largest P&C organization in the United States and the 8th-largest writer of commercial insurance (i.e., insurance products underwritten for commercial organizations, a subset of the P&C market).

The company focuses primarily on commercial insurance and specialty insurance (insurance not typically covered under standard homeowners or auto insurance policies). These two businesses accounted for three-quarters of CNA's 2016 revenue of $9.3 billion.

CNA is interesting in that its "combined ratio" has trailed industry leaders in recent years, and management is bent on correcting this relative underperformance. The combined ratio measures an insurance company's losses, expenses, and dividends paid to policy holders against its income from premium writing.

Management has decided to improve CNA's combined ratio by focusing on underwriting -- that is, the process by which an insurance company assesses risk, determines whether to insure a prospective customer, and estimates how much it should charge for the proposed insurance. Recently, CNA created the new role of "Chief Underwriting Officer" to optimize its underwriting function.

This effort should provide a boost to the company's earnings, which are already robust. Net profit margin hit 9% in 2016, a decent profit percentage within the broader insurance industry.

CNA issues a quarterly dividend, which it recently increased by 20% to $0.30 per share, yielding 2.5% annually at current share price. This is a pretty decent dividend yield, but the company has rewarded shareholders further by paying out a special dividend in 2016 and 2017 in the amount of $2.00 each year.

The special dividend is at management's discretion and depends upon annual profitability. Nonetheless, should the company issue the same dividend in 2018, shareholder dividend yield would reach approximately 6.5% (based on current share price).

While this generous total dividend pushed CNA's dividend payout ratio to 95% last year, it's more sustainable than it might appear. In most years, CNA has generated at least twice as much in operating cash than it has in net income (which, in accordance with generally accepted accounting principles, or GAAP, includes noncash expenses). So the organization has the wherewithal to dole out these shareholder rewards in a good year without hurting its balance sheet.

A "progressive" insurer worth adding to your portfolio

It's likely that you're already familiar with auto insurance juggernaut Progressive Corp. (NYSE:PGR) due to its pervasive TV and online advertising. Per the company's most recently filed annual report, it writes insurance in all 50 U.S. states and ranks fourth in the U.S. in premiums written for the private automobile passenger market.

Progressive is notable for its fast growth in premium revenue, the main component in insurers' total revenue. The organization's total revenue increased 12.5% to $23.4 billion in 2016, and through two quarters of 2017, total revenue is up 14% to nearly $13.0 billion.

At 85% of total annual premium revenue, Progressive's personal lines segment is its most important business focus. This segment, which includes auto, recreational vehicle, and specialty lines, has propelled the company forward through an innovative channel strategy, in which 49% of premiums are sold directly on the internet and via mobile devices, and 51% of premiums are sold through a network of 35,000 independent insurance agents across the United States.

For a company that emphasizes premium growth, Progressive manages to maintain a sophisticated and conservative approach to underwriting. In the line chart below from a recent investors' presentation, we can see that Progressive's combined ratio trends ahead of the insurance industry (with some caveats, a lower combined ratio is preferable to a higher one). Also note Progressive's increasing market share over the past 10 years, as denoted by the top blue line: 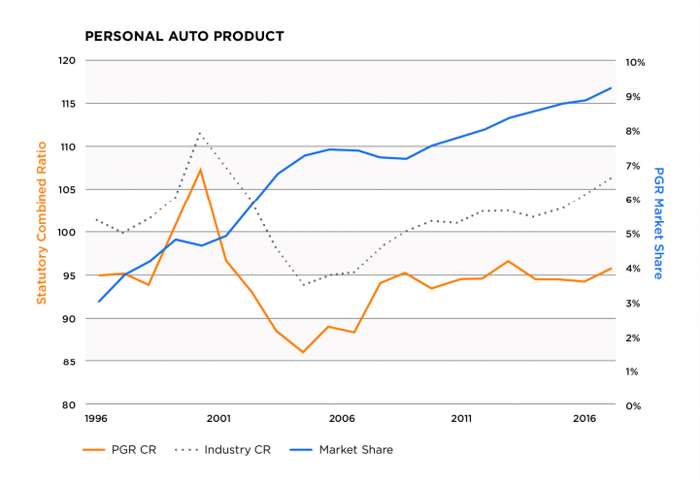 Progressive pays out a formula-calculated annual dividend based on after-tax underwriting income and other factors, including operating performance and the meeting of management-determined growth objectives. The company's 2017 payout (based on 2016 performance) of $0.681 per share yields approximately 1.5% at current share price, and results in a payout ratio of just 29%.

While this dividend can jump around (the payout was $0.89 for year 2015 and $0.69 for 2014), it's nonetheless an attractive return component for a stock that has appreciated 134% in price over the past five years, and posted a 184% rise on a total return basis. In comparison, CNA, with its generous dividend, has also performed handsomely, with a total return of 156% over the same period.

A caveat to the investment thesis

At the time of this article's publication, we're but a couple of weeks removed from Hurricane Harvey's catastrophic devastation in Texas. Both insurers underwrite policies in the state of Texas, so both will incur some impact on earnings.

However, all insurance companies establish reserves against large-scale disasters, so while CNA and Progressive will both see some impact from the storm, it will manifest as a charge against 2017 earnings and potentially a lesser charge against 2018 earnings, since it takes some time for claims to be filed and assessed in an event on this scale.

Thus, it might be prudent to wait a quarter or two to get a reasonable assessment from each company on the anticipated earnings impact before buying in. Over the long term, however, Harvey's impact will be minimal, as disasters are a natural part of the business cycle of P&C insurance companies.