T-Mobile (NASDAQ:TMUS) has been teasing  yet another Un-carrier initiative over the past week, and it just made the official  announcement. Starting on Sept. 12 (which just so happens to be the date of a certain smartphone event), T-Mobile One family plans that have at least two lines will enjoy Netflix (NASDAQ:NFLX) bundled for free at no additional charge. The new offering is officially called Netflix On Us.

The specific Netflix plan being bundled is the online streamer's Standard plan that includes simultaneous streaming on two devices in HD quality, which normally costs $9.99 per month; Netflix On Us can save customers $120 per year. A T-Mobile One family plan with two lines starts at $120 per month. The Un-carrier's older Simple Choice plans that have since been phased out, but have many grandfathered subscribers, are not eligible.

It's worth remembering that T-Mobile streams video over its network at 480p as part of its efforts to optimize traffic, particularly video traffic that requires a lot of bandwidth. That optimization (you could arguably call it throttling) was initially part of T-Mobile's Binge On offering, where streaming video wouldn't count toward data caps in exchange for downscaling the quality for bandwidth considerations, but Binge On was part of the older Simple Choice plans.

One offers unlimited data (with caveats), and so offerings like Binge On, Data Stash, and Music Freedom do not apply. Instead, One customers who want unlimited HD streams must pay an extra $10 per month for One Plus.

A different kind of bundle

The broader backdrop within the industry is that telecommunications giants have been aggressively moving toward bundling more and more content. To be clear, bundling has always been prevalent, but now even entire companies are getting bundled together through ongoing consolidation. 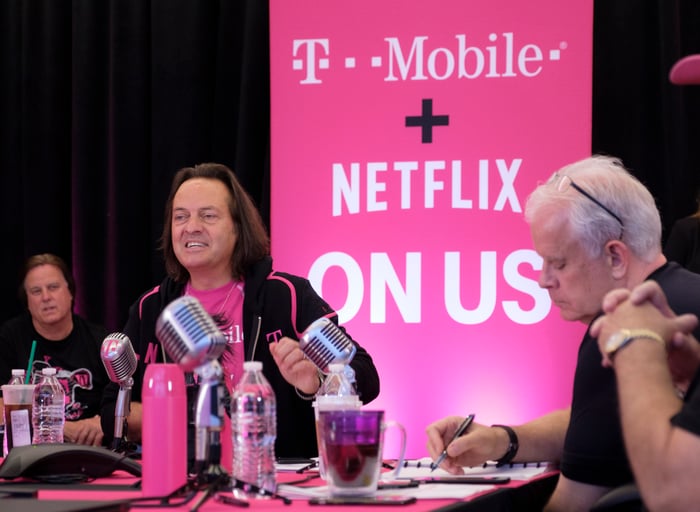 Larger carrier AT&T (NYSE:T) acquired DirecTV in 2015 for a whopping $49 billion, created a new DirecTV Now streaming service that it now bundles for $10 per month with Unlimited Choice plans (for the basic DirecTV Now tier). Ma Bell is also in the process of trying to buy Time Warner (NYSE:TWX) for $85 billion, which would score it valuable content services like HBO that it would inevitably also try to include in bundles. Regulators appear ready to approve that blockbuster deal, and if it closes, AT&T will have spent $134 billion on just two content-oriented megadeals in recent years. This is just one of many examples throughout the telecommunications sector.

It goes without saying that T-Mobile doesn't have that kind of money to make content-oriented acquisitions. But more importantly, it's not necessary. Large cable operators view Netflix as a threat to their traditional cable TV businesses, as an over-the-top (OTT) service that bypasses cable distribution and bundling and exacerbates cord-cutting. As such, those telecoms have little interest in partnering with Netflix.

But T-Mobile doesn't have a landline business, and it can achieve the same strategic goal by partnering with the dominant online video service without having to entertain expensive acquisitions that it can't afford. An important distinction is that Netflix On Us comes at no additional charge, a stark contrast to the other companies' explicit goal of increasing monthly bills. T-Mobile will have to bear those costs, which could put some modest pressure on margins, but overall Netflix On Us is a compelling offering that makes T-Mobile One even more competitive.