The American fast-food industry may seem vulnerable to healthier eating habits and lower grocery prices, but it's still growing at a steady pace. However, consumer tastes are changing, and fast-food leaders like McDonald's (NYSE:MCD) and Subway -- which still generate the highest systemwide sales in the U.S. -- aren't the most successful chains in the country.

The success of a fast-food chain is usually measured by its average sales per unit. By that measure, several smaller chains are crushing the bigger players, according to QSR's report on 2016 restaurant sales. 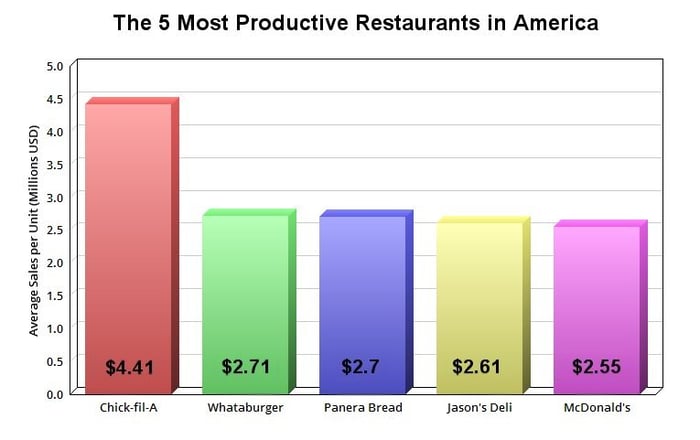 Chick-fil-A, which closes on Sundays, represents a growing threat to traditional fried chicken chains like KFC, boasting over 2,100 locations. Panera, with more than 2,000 stores, caters to more health-conscious consumers.

Whataburger has just over 800 stores in the South and the Plains, but it's a regional favorite like In-N-Out in the West and Shake Shack in the North. Jason's Deli has fewer than 300 locations, making it the smallest chain in the top five by a large margin. Looking ahead, bigger chains could struggle to match these smaller chains' productivity.

A Foolish Take: The Most Productive Fast-Food Chains in America @themotleyfool #stocks $MCD Next Article
Current