Today's growth stocks aren't the same growth stocks that were around in 1967. However, some of the companies from back then are still solid picks today. And some of today's will still be winners 50 years from now.

We asked three Motley Fool investors which growth stocks they would pick to buy and hold for the next five decades. Here's why they chose Baidu (NASDAQ:BIDU), Paycom Software (NYSE:PAYC), and Celgene (NASDAQ:CELG). 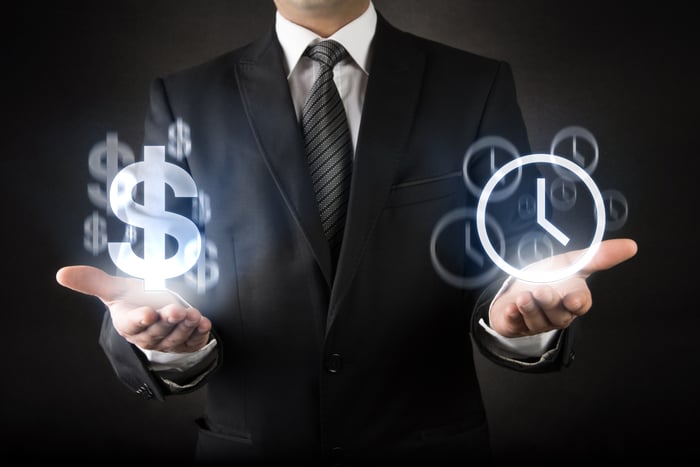 An option on the future

Matt DiLallo (Baidu): Chinese internet search giant Baidu generates billions of dollars in cash flow each year from its core business. While the company could use that money for a variety of things, one of its allocation priorities is on research and development (R&D) spending to drive new sources of growth. The company is focusing these R&D dollars on its two pillars: strengthening its mobile foundation and becoming a leader in artificial intelligence (AI).

To diversify risk as well as increase its optionality, Baidu's investments across those two areas run the gamut from developing smart home products and mobile payment technology to ride-hailing solutions and driverless cars, as well as a whole host of other ideas. Baidu wants to accelerate the company's ability to generate long-term shareholder value by potentially coming up with a game-changer that can deliver significant growth in the coming years. For example, according to one estimate, revenue from the company's car-related initiatives alone could reach $120 billion per year by 2021, which is more than 10 times last year's revenue.

Given the company's reinvestment focus, it's likely that Baidu will continue to roll a significant portion of its future cash flow into R&D. While many of these bets will fail, those that don't have the potential to deliver a spectacular payoff. That optionality to invest in a company that's continually working on the next big thing suggests that Baidu's best days are ahead. That's why it's the type of growth stock that an investor could end up holding for the next 50 years.

Tim Green (Paycom Software): Holding any stock for decades is hard. Even the best companies go through ups and downs that test the mettle of long-term investors. But there's no better way to build wealth than buying and holding high-quality, growing companies for many years.

One example of a solid long-term pick is Paycom Software. Paycom offers online payroll and human resources services, a small fish in a pond dominated by big players like ADP and Paychex. The company's approach is to offer one application that encompasses all of its services, meaning that all employee data is up to date automatically without any need for complicated integrations.

Paycom focuses on smaller businesses, but it has had some success winning larger clients. Its sales strategy is highly effective: The company installs an already successful sales manager into a new sales office, allowing up to two years for the office to reach its full potential. This has allowed Paycom to grow at a brisk pace while producing substantial profits. During 2016, revenue soared 46% to $329 million, and the company managed a GAAP operating profit of $58 million. While most fast-growing software companies pour money into sales, posting big losses in the process, Paycom focuses on the efficiency of its sales operation.

Paycom stock is not cheap, trading for around 80 times earnings. This is a stock that could crash if things start going wrong, or if there's a market downturn. But for long-term investors looking for good companies to buy and hold for a very long time, Paycom is a growth stock to consider.

Keith Speights (Celgene): Growth hasn't been a problem for Celgene. The biotech stock has more than quadrupled over the last 10 years, with earnings soaring over 2,600% during the period. Celgene (and Wall Street analysts) think that earnings will continue to grow by more than 20% annually over the next several years.

But is Celgene really a stock you can buy and hold for 50 years? I think so. In many respects, Celgene has become a blue chip biotech. It's one of the largest biotechs, boasting a market cap around $110 billion. Celgene claims a solid cash flow and a sizable cash stockpile.

This strong financial position is important, because it means that Celgene has the resources to pour into research and development to keep its momentum going. The company's top product, blood cancer drug Revlimid, is on track to become the top-selling cancer drug in the world within the next few years. But Celgene won't always have Revlimid, so investing in the future is critical for the stock to remain a long-term winner.

While Celgene remains committed to being a leader in the area of blood cancer, the big biotech has done a great job of expanding into other therapeutic areas. Solid tumors was a natural area to move into. However, Celgene has also built an impressive immunology and inflammation portfolio.

Perhaps most importantly, Celgene has demonstrated its ability to choose the drug candidates with the best chances of success. That ability, combined with deep financial resources, should mean that Celgene remains a winner for decades to come.