Many companies operate under the radar to serve their customers, and Dover (NYSE:DOV) is a prime example of that philosophy in action. The Illinois-based company produced equipment and components for use in a variety of industries, including energy, engineered systems, and refrigeration and food equipment. With one of the most impressive track records for dividend growth in the stock market, Dover is a favorite among income investors, but the recent difficulties in the energy industry have made some investors question whether Dover can keep performing as well as it has throughout its history. Let's take a closer look at Dover to see whether investors can be confident in its ability to keep its dividend moving higher.

Dover has a yield of 2.2%, which is just above the average for S&P 500 stocks. That's right in the middle of the range that the stock's yield has seen over the past decade, which has typically stayed between around 1.5% and 3%. Dover's dividend yield has tended to rise and fall in inverse proportion to movements in its stock price, but the company's gradually increasing dividend payouts have helped support the yield even as Dover shares have gained in value since the late 2000s. 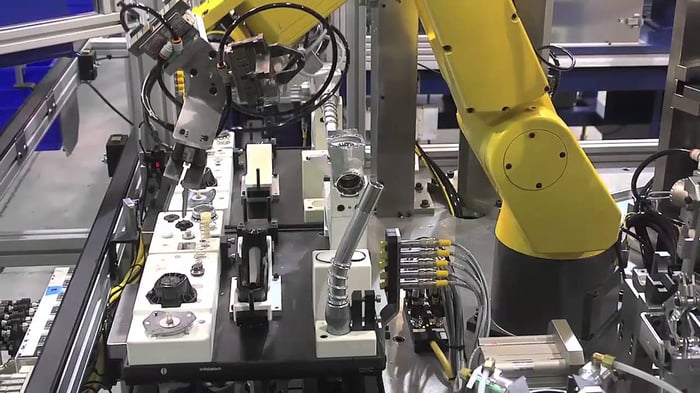 Dover pays out less than half of its earnings to shareholders as dividends, and that general philosophy has been in place for years. In fact, the current level actually reflects depressed earnings related to the slump in the energy sector, on which Dover relies for a substantial part of its overall business. Throughout much of the past decade, payout ratios were even lower at 25% to 35%, but investors are uncertain whether Dover's bottom line will improve enough to push the ratio back down into that range within the next couple of years.

Dover has a long history of treating its shareholders well, increasing its dividends each year for 62 straight years. Those increases haven't been insubstantial, with the most recent boost of 7% last month being fairly typical of Dover's long-term dividend growth trajectory. The company's dividend growth has ebbed and flowed with conditions in its core industry, but the most recent uptick reflects optimism about the near-term chances for a full recovery. 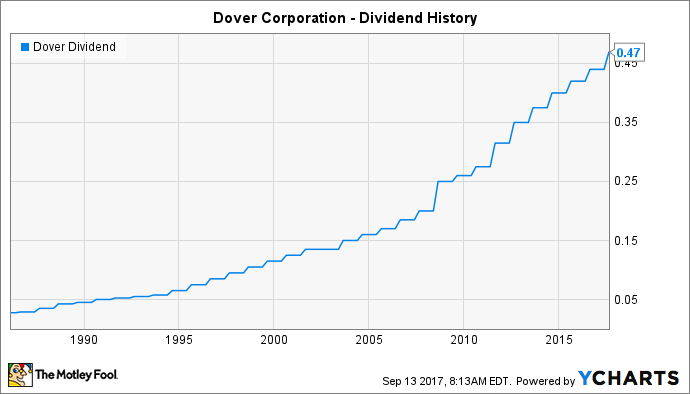 Dover stock has been on an upswing over the past couple of years, rebounding from a substantial decline between 2014 and early 2016. That's left the shares very close to their all-time high price from 2014, and its efforts to diversify its business exposure have played a major part in Dover's performance. Back in 2013, energy was responsible for two-fifths of Dover's overall earnings, and although that worked well during the sector's strongest days, it left Dover vulnerable to the decline in the energy industry during 2015.

Now, Dover is getting better contributions from all of its businesses. In particular, growth in the refrigeration and food equipment division shows the success of Dover's efforts to broaden its scope, and good performance from engineered systems and the company's fluids business is also helping to boost Dover's overall prospects.

One interesting idea involves Dover separating its energy segment from its other businesses. The timing of the move obviously wouldn't be perfect right now, with energy still struggling. However, with the potential to raise extensive cash from the deal, Dover would be able to reinvest in faster-growing businesses, which in turn could accelerate dividend growth in the future.

What to expect from Dover

Dover has had a long history of smart capital allocation, both in terms of rewarding shareholders through dividends and in making informed strategic moves to shift its business focus over the years. With the company looking hard at options to make the most of all of its business opportunities, Dover shareholders can remain confident that the dividend they receive is safe.