The payment-processing company has expanded rapidly, and it could still be in the early stages of major growth.

Payment-processing company Square (SQ) has grown impressively in recent years, and its stock price has more than doubled over the past year as a result. And despite its impressive record so far, there's reason to believe Square has only scratched the surface of its long-term potential.

In a nutshell, Square was expected to produce impressive growth, but the company has exceeded analysts' ambitious expectations. 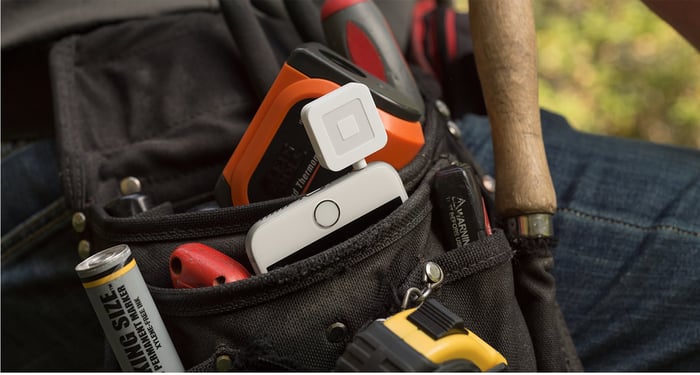 Gross payment volume has grown by 32% year over year, and handily beat expectations in the most recent quarter. Revenue grew by an impressive 26%, and expenses grew at a slightly slower 25% rate, the combination of which resulted in a narrower-than-expected quarterly loss.

In addition, while Square is well-known for its small-business payment solutions, the company looks like it is beginning to have greater success with slightly larger companies. Two years ago, just 11% of Square's payment volume came from sellers with more than $500,000 in annualized gross payment volume (GPV); that percentage has since grown to 19%.

The trend toward a cashless society

One major trend underlies the thesis that Square still has lots of growth potential, even after its impressive run. Simply put, consumers don't want to use cash anymore.

Despite the obvious trend toward card payments as opposed to carrying cash, two-thirds of businesses worldwide still don't accept card payments, and I think its fair to assume that this group is heavily weighted toward small- and medium-sized businesses -- Square's core market. The company aims to provide solutions for businesses that can't afford to set up traditional card payment systems.

Since Square only operates in five countries so far, it has enormous growth opportunities. For example, it recently launched in the U.K., where more than half of small businesses don't accept cards. According to a recent Square earnings presentation, the company estimates that by 2025, worldwide card payment volume will reach $45 trillion annually. Other estimates are even more optimistic -- the Nilson Report forecasts $55 trillion, with particularly strong growth in Asia, Africa, and the Middle East -- markets that are largely untapped by Square.

If Square can capture a market share of just 2% of the total card payment volume, that would amount to about 14 times its current annualized payment volume today. Growth like that could certainly propel the company to outperform the market.

Many ways Square could grow

As if that wasn't enough of a long-term opportunity, it's important to mention that while processing payments is Square's core business, it's not the company's only revenue stream, nor is it the only one with massive growth potential. For example, its Caviar food-delivery platform allows smaller restaurant operators to utilize delivery technologies that have traditionally only been available to the larger players in the industry.

Another example is Square Capital, the company's small-business lending platform. Over the past year, Square Capital's lending volume has grown by 68%, and the company has recently applied for a license to open its own industrial bank.

The bottom line is that the trend toward a cashless society gives Square lots of upside potential all by itself, and the other revenue-generating businesses it has integrated into its ecosystem could grow right along with it.