On Sept. 12, Apple (NASDAQ:AAPL) unveiled its new iPhone X (pronounced "iPhone 10") smartphone. The device is Apple's best -- and most premium -- smartphone to date, sporting a nifty 3D sensing technology (marketed as a "TrueDepth" camera), a slick design, and an edge-to-edge OLED display.

Unfortunately, while Apple's less-exciting iPhone 8 and iPhone 8 Plus -- essentially highly upgraded versions of last year's iPhone 7 and iPhone 7 Plus, respectively -- will be available for pre-order Sept. 15 and will make it into the hands of customers beginning Sept. 22, Apple isn't even going to take pre-orders for the iPhone X until Oct. 27, with deliveries not happening until Nov. 3. 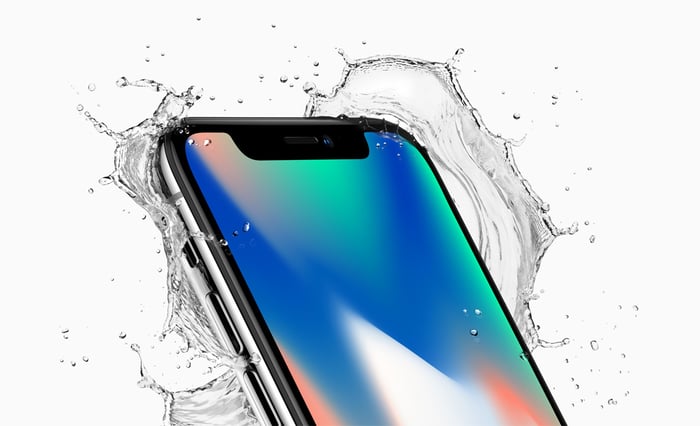 Per DigiTimes, mass production of the iPhone X was held back due to issues in procuring enough of the OLED displays for the devices. The OLED display supply issues, DigiTimes says, is "due to low yield rates" at Samsung (NASDAQOTH: SSNLF) Display, which is believed to be the sole source for the OLED displays found on this year's iPhone X.

On a related note, my fellow Foolish colleague Evan Niu also thinks that production delays of vertical-cavity surface-emitting laser (VCSEL) components at Finisar (NASDAQ:FNSR) -- VCSEL sensors are integral components of the TrueDepth camera system in the iPhone X -- could also be contributing to the push-out of Apple's iPhone X production, and therefore availability, schedule. Even if OLED supply constraints are easing, production could still potentially be limited by VCSEL supply.

However, the good news for Apple as well as those interested in buying the iPhone X is that these manufacturing issues have reportedly been solved -- if you believe DigiTimes, anyway.

DigiTimes reports that Samsung Display had originally intended to supply 80 to 85 million OLED panels to Apple in support of the iPhone X this year. However, DigiTimes' sources now think that total iPhone X shipments will only reach between 45 million and 55 million for the balance of 2017.

To be clear, if Apple can build and ship between 45 million and 55 million iPhone X devices in calendar year 2017 (there are only three-and-a-half months left in the year as of writing), that's a lot of iPhones.

This, to be quite blunt, could mean a substantial year-over-year boost in Apple's iPhone average selling prices during the coming cycle.

Now, of course, there are some potential offsetting factors to a possible surge in iPhone average selling prices. For example, if Apple's iPhone 8 and iPhone 8 Plus aren't sufficiently compelling to the subset of the iPhone buying population that isn't going to buy the iPhone X, then that subset of iPhone buyers could shift their purchases toward the now-discounted iPhone 7 and iPhone 7 Plus.

Personally, I think that the iPhone 8 and iPhone 8 Plus represent solid upgrades from the iPhone 7 and iPhone 7 Plus, but only time will tell if the target market for these devices agrees.

At any rate, this product cycle looks as though it should be quite good for Apple's iPhone business, which is ultimately good for Apple's overall financial health (since more than 60% of Apple's total revenue comes from iPhone sales) and its stock price.