Artificial intelligence underlies much of Amazon's business. But it's hardly the only company that requires employees schooled in the nascent science, and there are too few domestically to fill their needs.

Over the past several years, e-commerce giant Amazon.com (AMZN 0.01%) has become one of the leaders in the emerging field of artificial intelligence (AI). The company uses AI technology in a host of ways behind the scenes for things such as improving search results, offering better product recommendations, and enhancing its forecasting and inventory management. The more public face of Amazon's AI effort is Alexa, the voice-activated digital assistant at the core of its market-leading Echo family of smart speakers.

Given how much it has riding on the technology, it should come as no surprise that Amazon has announced plans to expand its AI research by building a new R&D center in Barcelona, Spain. 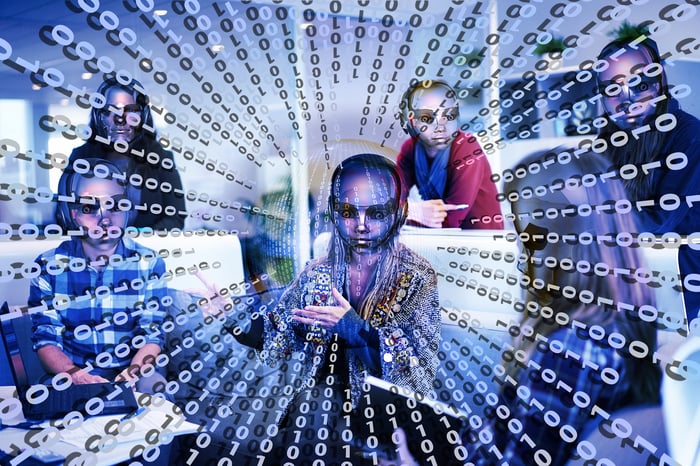 Amazon is setting up AI labs around the globe in search of AI talent. Image source: Pixabay.

As businesses far and near awaken to the transformative potential of AI, they have been snapping up all the available talent from the relatively small pool of scientists and technicians trained in artificial intelligence, and its sub-disciplines, machine learning and deep learning. As the scarcity of people with the requisite knowledge and abilities has deepened, those companies have been looking to tech centers outside Silicon Valley to fill the void.

Earlier this year, Alphabet Inc. (GOOGL 0.32%) (GOOG 0.47%), a pioneer in the AI revolution, revealed that it would launch Google Brain Toronto, its second such research facility in the Great White North. A previous location in Montreal was announced last year. These tech hubs are found near major universities that have courses of study in AI, providing convenient access to scientists and researchers, not to mention those soon to graduate.

Doubling down on AI research

Amazon has revealed plans to build a new AI research hub in Barcelona, Spain, which will be located in the city's 22@ start-up district, and plans to hire more than 100 scientists and software engineers to staff the facility over time.

Facilities such as these are key to Amazon's plans to evolve its use of the technology. Using software models, algorithms sift through large amounts of data and extract patterns in order to make more accurate predictions or assessments. Amazon uses AI and machine learning as the foundation of many of its customer recommendations, logistics capabilities, and smart speakers, so expanding on its AI capability is a key competitive advantage.

This isn't the only geographic move Amazon is making in an effort to bulk up its AI staff. Earlier this year the company expanded its research and development center in Cambridge, England, by adding a 60,000-square-foot facility to house over 400 "machine learning scientists, knowledge engineers, data scientists, mathematical modelers, speech scientists, and software engineers" according to a press release.

These moves are indicative of just how serious Amazon is about the field and the geographic lengths the company is willing to go to have access to AI talent.

What is all this AI worth, anyway?

Amazon CEO Jeff Bezos has been quite clear about his opinions regarding the future transformative influence of AI:

I think it's gigantic. ... It's probably hard to overstate how big of an impact it's going to have on society over the next 20 years. ... It has been a dream since the early days of science fiction to have a computer that you can talk to in a natural way and actually ask it to have a conversation with you and ask it to do things for you. And that is coming true.

Beyond the intangible benefits that Amazon realizes from its AI research, some believe that its Echo family of smart speakers powered by Alexa represent the greatest quantifiable opportunity. Mark Mahaney and Jim Shaughnessy of RBC Capital Markets revealed that 50% of Echo owners use the device daily and 17% have placed orders on Amazon's website using the device. The analysts make the case that the Alexa-based devices could contribute as much at $10 billion to Amazon's top line by 2020.