It's now been a little more than a week since Hurricane Irma battered Florida, and Central Florida's leading tourist attractions weren't immune. Disney (NYSE:DIS) and Universal Orlando parent Comcast (NASDAQ:CMCSA) reopened on Tuesday after shaving a little more than two days off their operating calendars.

With electricity out through most of South Florida following the fierce windstorm, I joined what I figured would be a large number of post-Irma evacuees looking for escapism in the form of a short drive up north to Orlando. I wasn't exactly alone, but spending the past week at Disney World and Universal Orlando was surreal in terms of the light crowds. It's undeniable that Disney and Comcast will lay some of the blame of any potential shortfall this quarter on Hurricane Irma disrupting their operations. 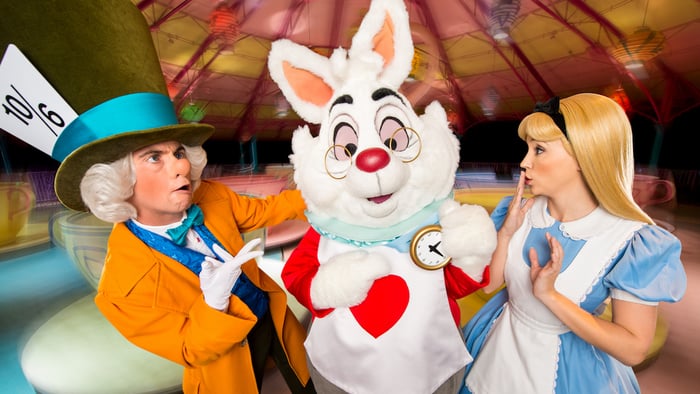 September weekdays are typically quiet at Disney World and Comcast's Universal Orlando, but it's certainly out of the norm to head into the Magic Kingdom on a Tuesday and walk right on to most rides. Even the iconic Space Mountain was a walk-on a couple of hours into the operating day. The park's two rides that historically draw the longest lines -- Seven Dwarfs Mine Train and Peter Pan -- had half-hour wait times. Those two queues usually balloon up to north of an hour shortly after the park open. Later in the week, it would be Pandora's Flight of Passage, Disney's most impressive new ride in more than a decade, commanding wait times of less than an hour. The queue for that bar-raising banshee-flying simulator has been as long as four hours during peak summertime stretches.

Irma and slow season weekday translate into less than an hour wait for either Pandora ride at 3pm. #HoldMyBanshee pic.twitter.com/LnM1Nopu2X

Wednesday at Universal Orlando was more of the same. There were a few attractions that weren't open right away. The Kilimanjaro safari ride at Disney's Animal Kingdom joined the Hulk coaster and Jurassic Park River Adventure at Universal's Islands of Adventure as rides that opened later in the week. Guests knew that the parks wouldn't be whole right away. However, the absence of visitors is what made it a great experience for tourists but likely at the expense of Disney and its shareholders.

It wasn't until the weekend when things seemed to be getting back to normal. The first night of Universal Orlando's Halloween Horror Nights on Friday was as busy as any recent opening weekend. A late afternoon stroll through Disney's Hollywood Studios on Saturday was the first time a Disney park felt congested last week.

There were plenty of good reasons for the parks being empty. Airports struggled to reopen, making it hard for incoming guests to initiate their Orlando getaways. Most area schools decided to close for the week, but many local families were too busy in restoration efforts to escape to the barren theme parks.

We also can't ignore the timing of the storm. This is value season in Orlando. It was going to be pretty empty to begin with. However, Disney has been trying to offset seasonality in traffic by rolling out tiered pricing last year. It split the calendar into three pricing levels based on anticipated demand, making a visit in September a lot cheaper for one-day ticket purchases than a visit earlier in the summer. It may or may not be a coincidence that Disney has had stagnant attendance growth since the introduction of demand-based pricing. One way or another, Disney and Comcast now have a juicy scapegoat to blame for the current quarter's softness -- and they probably won't be the only companies blaming Hurricane Irma for weak financial performances.