The year 2021 -- that's when Gilead Sciences (NASDAQ:GILD) thinks its acquisition of Kite Pharma (NASDAQ: KITE) will start to pay off. When Gilead announced plans to buy Kite, the company stated that the deal was expected to be neutral to earnings by year three and accretive after that.

In one sense, though, Gilead's Kite Pharma acquisition has already paid for itself. How? For investors. 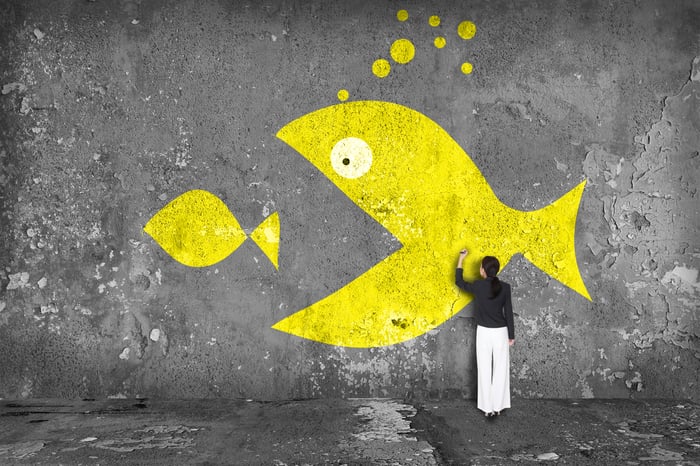 For much of 2016 and 2017, all the news for Gilead seemed to be negative. Sales for the biotech's hepatitis C franchise were plunging. Even Gilead's executives admitted they didn't know when things would turn around in the hep C market. Solid performance from the company's HIV and other drugs wasn't nearly enough to offset the declines. As a result, Gilead's revenue, earnings, and stock sank.

Then came news that Gilead planned to acquire Kite Pharma for $11.9 billion. The following chart tells the story of what that announcement meant for Gilead Sciences shareholders. 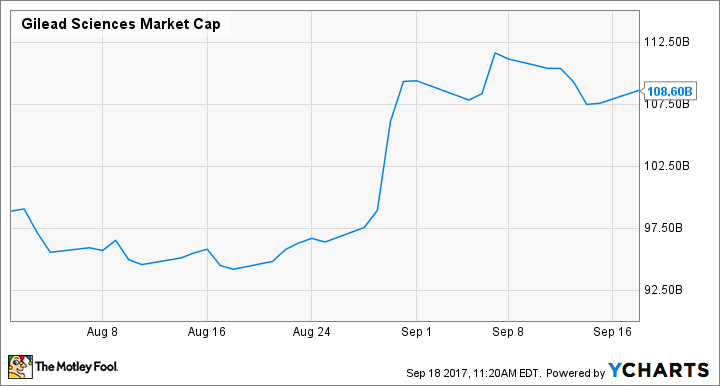 Let's do the simple math. The Kite acquisition increased the market valuation of Gilead Sciences from $96 billion to $108 billion. That's a $12 billion increase -- the amount Gilead will pay for Kite. For investors, Gilead's decision to buy Kite has already paid off.

Why Kite was right

There are several reasons why the market responded so positively to Gilead's Kite deal. For some investors, the mere fact that Gilead had actually done anything was encouraging. It was only a couple of weeks before the announcement of the acquisition that Gilead CEO John Milligan stated that it might not make any deals in oncology. That statement, of course, turned out to be a head fake to keep everyone guessing.

My view is that the news of the Kite buyout made some investors wake up to the reality of what a bargain Gilead Sciences stock had become. This trend had already started in June, with rumors that French drugmaker Sanofi could be making a play for buying Gilead. As is the case with most rumors, however, the story soon fizzled out.

Like many, I thought that Gilead would most likely make an acquisition that would quickly boost its top and bottom lines. That won't happen with Kite, since the smaller biotech doesn't have a product on the market yet. Even assuming Kite's lead candidate axi-cel wins FDA approval in November, there will be a gradual ramp-up in sales.

However, Gilead had hinted at making a "transformative" acquisition. While Kite won't transform the big biotech's financial prospects in the near term, the deal definitely deserves to be called transformative because of the effect it will have on Gilead's position in the oncology arena. By making this one acquisition, Gilead will instantly become one of the leaders in the exciting new area of using cell therapy to treat cancer.

Perhaps the best news about the Kite Pharma acquisition for investors is that Gilead remains in excellent position to make more deals. Gilead chose to finance the Kite deal through a combination of cash, bank debt, and senior unsecured notes. It doesn't seem likely that the big biotech will make too big of a dent in its cash stockpile of nearly $37 billion that it reported at the end of the second quarter.

Gilead CFO Robin Washington stated recently that the biotech intends to "maintain financial flexibility for future acquisitions." COO Kevin Young said that Gilead continues to look at further potential acquisitions in cell therapy. In the past, Gilead's executives have also mentioned the potential for deals that would bolster the company's portfolio in inflammation and non-alcoholic steatohepatitis (NASH).

I expect more wheeling and dealing will be forthcoming from Gilead in 2018, especially if efforts to reform the U.S. corporate tax structure are successful. Will future deals pay off as quickly for shareholders as the announcement of the Kite acquisition did? Maybe not, but the company's track record in making smart acquisitions is encouraging.