If you're a music fan who's tired of being gouged when you buy tickets online, here's some good news for you.

Amazon.com (NASDAQ:AMZN), the great bulldozer of retail models, is interested in the ticket-selling market. According to a Reuters report last month, Amazon is looking to partner with venue owners in the U.S. to sell event tickets, attempting to break into a market now dominated by Live Nation's (NYSE:LYV) TicketMaster. 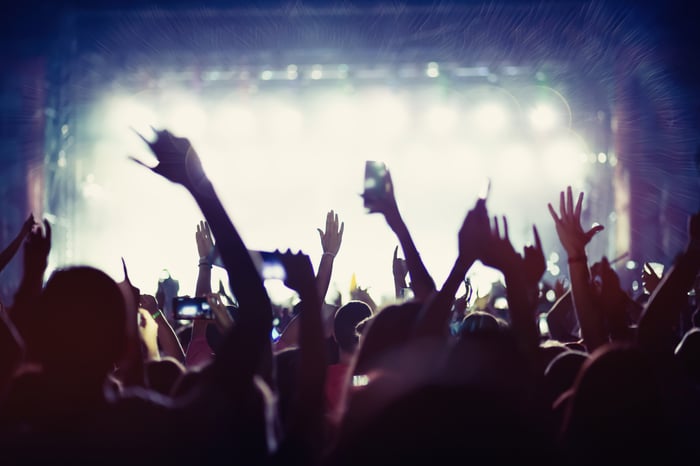 The move would fit in perfectly with Amazon's business and strategy. The e-commerce giant has set out to sell virtually everything available on the internet, and even offline as well, as we've seen with the recent Whole Foods acquisition. Event ticketing is one of the few such markets that Amazon has not yet tackled, and concert events alone are worth more than $7 billion and growing fast, with sports adding billions as well.

Amazon is already in the entertainment business. The company is spending more than $4.5 billion on video streaming content: it offers Amazon Music, a Pandora-like music-streaming service to Prime members for free, and it's set to stream 10 Thursday Night NFL games this year for the first time. Promoting and selling tickets for live events would no doubt complement those businesses.

Some markets need to be disrupted

Innovation may be at the core of American business ideals, but new ideas and disruptive business aren't always welcomed in the marketplace. Witness the faceplant that the start-up Bodega experienced when going public with its high-tech vending machine. Critics cried cultural appropriation for taking a name that belongs to convenience stores, often owned and operated by immigrants, in major cities like New York. There they are seen as a cornerstone of the neighborhood and the local culture, and fans asked why some nerd kings from Silicon Valley would want to mess with the stores they know and love.

Netflix (NASDAQ:NFLX) offers a counterexample. That company upended business models that Americans loath. First it made the trip to the video store obsolete, and, with it removed the onerous experience of wandering the aisles of Blockbuster for a half hour only to settle on the latest big-budget new release. After moving on to streaming, Netflix is hastening the end of the cable bundle that Americans vilified for years for its high prices, unwanted programming, and terrible customer service.

The event-ticketing model that exists today may be even more reviled than the cable industry.

Consider these headlines about TicketMaster. It's "The Most Hated Brand in America," according to Fast Company. Wired declared "Everyone Hates TicketMaster." And The Washington Post said the company has "ruined the concert-going experience."

It's no surprise why. TicketMaster slaps giant surcharges, often in the 40% range, on ticket sales at the end of online transactions. Those fees can make an otherwise affordable ticket out of reach -- and the worst part, from the perspective of the consumer, is that TicketMaster, unlike StubHub, adds almost no value to the transaction. It's the definition of rent-seeking.

The company is able to gouge customers because it has an exclusive agreement with venues to be their only online ticket seller. Fans who want to see their favorite acts when they come through town have no other choice but to visit the physical box office, and many don't have the time or ability to do so.

Amazon wants to break this monopoly, and there's no company better positioned to do so. Not only does the e-commerce giant have the ability, the interest, and the financial leverage, but customers also know and love Amazon. It takes its customer-centric motto seriously and is well known for cutting prices and compressing margins when it enters an industry.

Bouncing TicketMaster won't be easy because of those exclusive deals, and Amazon has come to a stalemate with some potential partners over who controls customer data. However, the company has already made inroads in the U.K. as it becomes a major ticket seller for events in London, where competition is more fragmented.

Amazon refused to comment on the Reuters story, but such reports are often followed by big moves, especially for a company like Amazon, which touts "a bias toward action" as a core principle and strength. Talk of the company opening thousands of grocery stores preceded the recent Whole Foods takeover.

For Amazon, taking on TicketMaster would be a win-win. Not only would the company get a foothold in a multi-billion-dollar, high-margin industry, but it would also endear itself to a whole new group of customers by eliminating or significantly reducing exorbitant surcharges, which would propel its already-high customer loyalty.

As Jeff Bezos has said, "your margin is my opportunity." Look out, TicketMaster.