Editor's note: After this article was published, Intel reached out to the author to reiterate that the company will be shipping its first 10-nanometer products near the end of the year, beginning with a lower volume SKU and followed by a volume ramp in the first half of 2018.

DIGITIMES just published a report in which it says that Intel's (NASDAQ:INTC) upcoming Cannon Lake processor for low-power notebooks has suffered another delay, this time from a launch in the middle of 2018 to a launch at the end of 2018.

Although this clearly indicates that Intel's technology and manufacturing group continues to face serious execution issues, a question that's more relevant to Intel's business performance is: How will the delay of Cannon Lake impact the revenue and profits of Intel's client computing group? 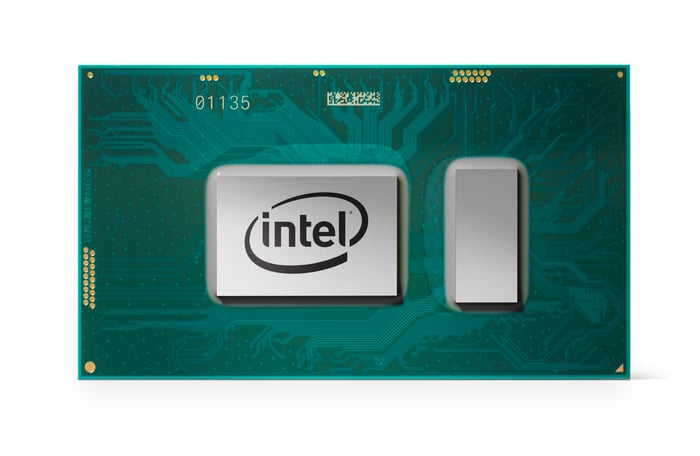 It's important to understand that the Cannon Lake part that's been delayed multiple times is only one product in a relatively broad portfolio that'll serve a diverse personal computer market.

It's aimed at thin-and-light notebooks as well as power-constrained 2-in-1 devices.

Intel recently released a product known as Kaby Lake Refresh (built using its 14nm+ technology) that addresses most of this market, and the company is planning products based on its Coffee Lake architecture (built using 14nm++) to go after higher-end thin-and-light notebooks, high-performance notebooks, and mainstream desktops.

Intel also has a new 14-nanometer-based product family, based on the Gemini Lake architecture, coming for the low end of the PC market as well.

In short, for the entirety of 2018, Intel should have a good set of products -- products that can be manufactured in high quantities at reasonable cost structures -- to effectively address the bulk of the personal computer market.

The products that will be most impacted by this delay will be products such as Apple's 12-inch MacBook, which rely on Intel's Y-series of processors (Cannon Lake-Y is one of the chips that has reportedly been delayed to the end of 2018).

While PC vendors will be able to continue selling computers with older Y-series chips, the problem they'll face is in marketing: Just about every other type of PC will get some sort of eighth-generation Intel Core processor except those that rely on the Y-series processors -- those will be stuck with seventh-generation Core chips for quite some time.

That marketing issue could lead to lower sales of such systems, impacting both personal computer vendors' sales and, commensurately, Intel's.

Keep in mind, though, that the situation isn't hopeless: Intel could fudge it a bit, bump up the frequencies of the current Kaby Lake-Y chips, call the new chips Kaby Lake Refresh-Y, and market them as eighth-generation Core processors.

In fact, I wouldn't be surprised to see Intel pursue that course of action.

I don't want readers to walk away from this thinking that because Intel had the foresight to build a 14nm++ technology, as well as products based on that technology, that the issues we're seeing with the 10-nanometer technology are acceptable.

They're not. They indicate structural issues within Intel's chip manufacturing technology group that needs to be fixed. Moreover, the longer it takes for Intel to ramp its 10-nanometer technology (and subsequent derivatives) into mass production, the bigger the opportunity is for Intel's manufacturing competitors and their respective customers (Intel's direct competitors in the marketplace) to capitalize on the situation.

But in terms of the financial performance of Intel's client computing group over the next 12 months or so, I don't see the delay of the Cannon Lake processors having much of a negative impact. If anything, keeping the entire product portfolio on the increasingly mature 14-nanometer technology could have a favorable impact on the company's product costs and thus gross profit margin.