Back in January 2016, Tesla (NASDAQ:TSLA) confirmed to Electrek that it had hired famous chip architect Jim Keller. Keller's most prominent accomplishments were helping Apple kick off its own custom chip ambitions with the original A4 that powered the iPhone 4 in 2010, as well as the subsequent A5. The Mac maker scored Keller through its 2008 acquisition of PA Semi for $278 million. Keller left Apple in 2012 for a second stint at AMD (NASDAQ:AMD), helping lead development of its Zen architecture. Shortly after picking up Keller, Tesla proceeded to hire his former colleague Peter Bannon, as well as other high-level chip engineers.

This is probably obvious, but you don't assemble a team of rock star chip architects unless you're interested in designing custom chips for specialized purposes. Over a year and a half after recruiting Keller, we're now learning that Tesla is doing exactly that. CNBC broke the news yesterday evening that Tesla was collaborating with AMD to develop a custom chip that would specialize in artificial intelligence (AI) in order to deliver the immense processing power necessary for autonomous driving. The electric-car maker has reportedly started receiving early samples for testing purposes. The chips will be built based on AMD's intellectual property, and Keller now has a team of over 50 people, according to the report. 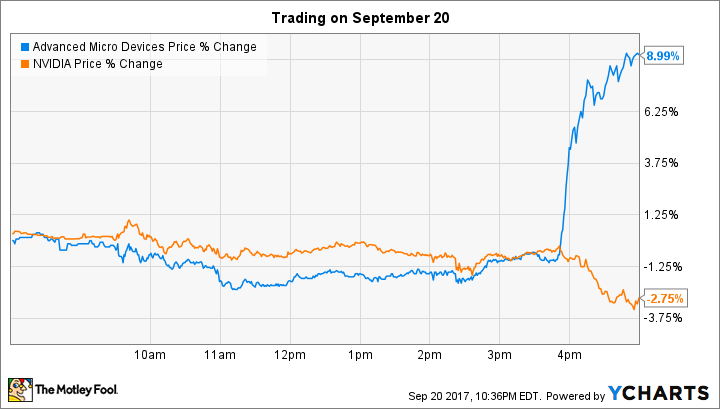 The report came just hours after GlobalFoundries CEO Sanjay Jha mentioned at a conference that it was working with Tesla to fabricate chips. GlobalFoundries was created as a spinoff of AMD's manufacturing operations in 2008 (AMD sold off its remaining stake in GlobalFoundries in 2012).

Meanwhile, AMD's semi-custom chip business has become increasingly important, with the most notable examples being the chips inside Sony's PlayStation 4 and Microsoft's Xbox One. AMD's enterprise, embedded, and semi-custom segment comprised nearly half of total revenue last quarter.

But will it pay off?

Tesla is a major fan of vertical integration, which is somewhat unusual in the auto industry. There are important strategic benefits related to designing custom silicon, including greater control over road maps, tailoring performance and power efficiency to specific needs, and product differentiation, among others. Just look at how far Apple has come with its own "Apple-designed" chip strategy. But there are immense costs too, as it takes years of development and significant R&D investments.

It helps if you're shipping a high volume of products, since you can then spread out those capitalized R&D investments over a larger number of units. Tesla has historically been a low-volume manufacturer -- the company has delivered approximately 94,000 Model S and Model X vehicles over the past four quarters -- but is ambitiously targeting over 1 million units by 2020, driven by Model 3 and Model Y. Its ability to ramp volumes by tenfold in such a short period of time is easily the biggest uncertainty, which subsequently determines whether or not vertically integrating chip design is capital efficient.

The alternative is to source chips from chipmakers like NVIDIA or Intel, which is largely what other automakers do. Intel is in the process of acquiring Mobileye, which Tesla transitioned away from in a public spat last year. Designing custom chips is a huge gamble, but there could be a commensurately huge payoff if the strategy succeeds. It's too early to say if it will.