It is almost impossible to find stocks that can match the shoe giant's outsized returns over the long haul -- but these three tickers might actually come close.

Sportswear and athletic-shoe giant Nike ( NKE -1.50% ) has created a lot of wealth over the years. Early investors have enjoyed an eye-popping 29,500% return in 37 years, or roughly 17% per year. Nike shares have also nearly tripled over the last decade and more than doubled in the last five years. All of these long-term returns have absolutely crushed the wider market.

That's all in the rearview mirror now, though. What stocks on the market today can offer returns like that over the next three or four decades?

When we asked a handful of investors the same question here at The Motley Fool, they were quick to recommend Ligand Pharmaceuticals ( LGND -4.75% ), Finisar ( FNSR ), and First Solar ( FSLR -1.89% ).

Read on to learn more. 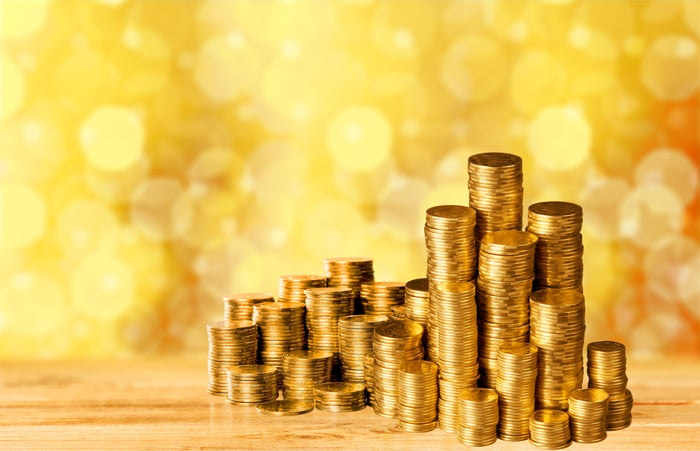 Anders Bylund (Finisar): Fiber-optic networking is an industry with brilliant long-term prospects. As long as the world keeps asking for more networking bandwidth and faster connections, the sector will grow and thrive. And there's no end in sight to that macro trend. In fact, it is only accelerating, thanks to trillion-dollar developments like the Internet of Things and 5G wireless networking (those cell towers need an even faster backhaul to the regular internet, which is the fiber optics come in).

Many stocks in the fiber-optic networking sector have been trailing the broader market in recent quarters. 5G network builds won't start in earnest until mid-2018, and many Chinese telecoms are pushing their infrastructure upgrades back a bit because of regulatory concerns. These are short-term issues for an industry with great long-term prospects, so these depressed stock prices should rocket back to health over the next couple of years.

Amid many fine investment opportunities in this sector, Finisar stands out as a particularly strong choice right now. The maker of high-speed optical network transceivers and other fiber networking components has seen share prices fall 29% in 2017. But the company sports a solid balance sheet and a long streak of solid bottom-line profits. Management expects the Chinese order slowdown to end within the next two quarters, and several large telecoms in America and elsewhere are putting Finisar's latest line of high-speed transceivers through their testing procedures in preparation for new orders.

Meanwhile, Finisar shares are trading at just 10 times trailing earnings and 13 times free cash flows. Earnings are expected to soar in the next five years at an annual pace of roughly 16%. Any way you slice it, the stock is cheap.

And for those low prices, you're buying a market leader in a sector primed to explode next year. Matching Nike's fantastic long-term returns is a tall order, but Finisar looks ready to deliver.

Sean Williams (Ligand Pharmaceuticals): Few retailers have been able to "Just Do It" like Nike over the trailing 10 years, with a better than 220% gain. However, if there's a company with Nike-like return potential in the works, I believe it to be budding biotech stock Ligand Pharmaceuticals.

Ligand isn't like a traditional biotech stock in that it doesn't spend years or decades bringing drugs from the discovery stage to pharmacy shelves, which is an exceptionally risky boom-or-bust model. Instead, Ligand develops and acquires intellectual property in the biotech space, allowing it net royalties on any drugs that utilize its technology and make it to market. These royalties often range between 4% and 4.5% of net sales. This structure of acquiring or developing royalty assets allows for an exceptionally low cost structure, meaning very little in the way of revenue is needed to push Ligand to a profit.

So, what does this mean for shareholders? Essentially, the more deals Ligand signs for its technology, the more chances it'll have to hit "home runs." Let's be honest -- there's virtually no chance that all of its partners' clinical trials are going to succeed. Therefore, the more trials its technologies are a part of, the better Ligand's shot at long-term success. In 2008, just nine trials were utilizing its technology, compared to more than 155 today. There are also 17 drugs approved by the Food and Drug Administration (FDA) utilizing its assets, including a biosimilar drug of Avastin. In total, 25% of the more than 155 ongoing trials are either in phase 2, phase 3, or being reviewed by the FDA, meaning that new sources of revenue could be right around the corner.

The result, according to estimates from Wall Street, is that Ligand could see sales jump from a reported $109 million in 2016 to $262 million by 2017. With gross margin expected to be in the "mid 90% range," according to the company, this looks like a poster child to follow in Nike's footsteps in terms of long-term return. Matt DiLallo (First Solar): Solar power has been growing at a blistering pace in recent years, with installations in the U.S. up a white-hot 97% last year. While solar installations have cooled off this year, they still expanded by 8% last quarter to 47.1 GW, which is enough to power 9.1 million homes. That said, there's still plenty of room to run. For example, assuming no government policy changes, solar could hit 316 GW of installed capacity by 2050.

That bright future for solar in America is just one part of the global story, but it should give investors a flavor of the upside potential for solar panel makers like First Solar. That said, while that rising market should benefit most panel makers, First Solar stands apart as one of the best positioned to profit from it in the future given its lower cost solution.

While most of its peers make silicon-based panels, First Solar manufactures thin-film panels made with cadmium-telluride, which absorbs more frequencies of light and uses fewer materials. While these panels are less efficient than silicon-based ones, they're cheaper overall.

Furthermore, the company is working to take its cost advantage a step further with its upcoming Series 6 module. That panel is larger and more efficient than its current Series 4, which will help push system costs even lower. In fact, the company believes this module will not only be cheaper than silicon panels but competitive with fossil fuels in many areas of the country. It's a potential game-changer for the company and could deliver high-powered returns for investors.