Nike Inc (NYSE:NKE) has reigned over the sports world for more than a generation, but its grip on the crown is starting to weaken.

First, it failed to make the best-selling sneaker in the country for the first time in more than a decade last year as the throwback Adidas (OTC:ADDYY) Superstar claimed the top spot. Nike filled out the rest of the top ten, but that was small consolation for a company accustomed to winning.

Now we just learned that in August, Adidas passed Nike's Jordan Brand to become the No. 2 sneaker line in the country, according to the research firm NPD Group, behind Nike Brand itself. 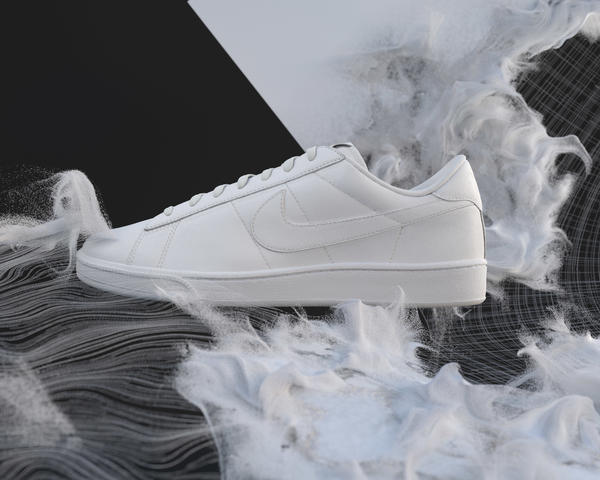 NPD analyst Matt Powell was so surprised by the move that he said it was something "I never expected to see in my lifetime."

Adidas's market share improved by nearly half to 13%, though the Nike brand is still far ahead at 36%. Still, the news is the latest evidence that Adidas continues to be ascendant, while Nike and Under Armour (NYSE:UA) (NYSE:UAA) struggle to resist its rise.

Fashion is fickle, and it's never easy to pinpoint why one brand is taking share from another one, but Adidas' styles are clearly resonating with American shoppers in a way that its competitors' aren't. Just a few years ago, the company was falling behind as even Under Armour had passed it as the number two sportswear brand, but efforts to capitalize on classic styles and innovate with new designs and technology have paid off.

As the chart below shows, the fortunes of Adidas, Nike, and Under Armour stocks have been dramatically different over the last two years. 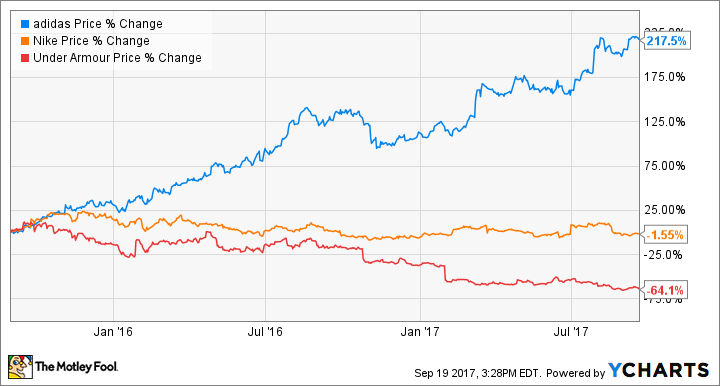 Adidas' surge is being led by its comeback in North America as sales jumped 28% in the region in the first half of this year, and 24% last year.

Meanwhile, revenue growth at Nike and Under Armour is mired in the single digits.

Nike knows it has work to do. That's why the Swoosh announced layoffs and a restructuring plan in June, as well as a decision to sell directly on Amazon.com for the first time ever.

Nike said then that it planned to lay off 2% of its workforce, or about 1,400 employees as it focuses on quicker innovation and production cycles, and expanding its direct-to-consumer channel with a focus on 12 key cities around the globe.

The plan sounds good, but investors have to wonder after this latest sales update how long it will take Nike to stem Adidas' momentum and build some for itself. Nike's agreement with Amazon has helped it crack down on third-party sellers on the site, but the problems with the iconic Jordan Brand may be harder to fix.

Jordan releases once commanded overnight line-ups and hot resale markets, but recently Nike has taken away the scarcity that helped make the brand so popular to begin with.

In order to combat weakness in the basketball shoe market, Nike has released new Jordan styles more frequently, which has eroded its brand value and hurt demand for the popular shoe.

So far, Nike has been able to deliver decent profit revenue growth despite sluggish revenue growth, but analysts seem to be getting wary as the Swoosh has received several price cuts and downgrades on the recent news as Adidas continues to take sales away.

Investors will get an update on Nike's performance Sept. 26 when the sportswear giant reports first-quarter earnings. Analysts are expecting revenue to be essentially flat at $9.1 billion as the company laps last year's Olympics, and earnings per share is seen falling from $0.73 to $0.48, though earnings growth is expected to return in the subsequent quarters.

Those numbers are low enough that Nike could beat them, but the bigger concern for investors is Nike's brand and its battle for market share with Adidas. Look for management to address those questions on the earnings call as investors surely deserve answers.