Over the last 18 months, Kroger's comparable quarterly sales, excluding fuel sales, have shifted from healthy growth in the mid-single digits to a complete standstill. In the final quarter of 2016, the company saw its 13-year streak of comparable sales growth snap, as comps declined for the first time in 53 quarters.

Kroger is cuing up a comps revival, but for now, progress is wan. Management projects just a slight expansion in this metric of 0.5% to 1% for the second half of the current fiscal year. The culprit, of course, is fierce competition among grocers for customers. And it will only intensify: 2018 promises to ring in a battle royale within the grocery industry.

Whole Foods Market will present a distinct online retailing challenge once new owner Amazon (NASDAQ:AMZN) integrates the organic chain's loyalty program with its Amazon Prime service. As for brick-and-mortar developments, privately held German discount grocers Aldi and Lidl will open 500 new stores in the U.S. between them by the end of 2018 alone, as Aldi seeks to expand and Lidl builds on its 2017 entry on the east coast. In a pre-emptive response to the European invasion, Wal-Mart Stores (NYSE:WMT) -- never an easy grocer to undercut -- is already allowing its gross margin to slip in 2017 in order to "invest in price."

These pitched battles, both online and in midsized and major metropolitan areas, are occurring just as shopping habits undergo significant change. The Food Marketing Institute has been tracking grocery industry trends for decades. Last year, its "U.S. Grocery Shopper Report" confirmed what many of us have experienced personally: Shoppers are splitting their grocery buys over a number of different store types and channels.

In fact, the report showed that in each of the preceding three years, a "significant" number of shoppers (between 7% and 9%) no longer claimed loyalty to a primary grocery store.

That's a problem for Kroger, which operates as a conventional grocer in an increasingly specialized world. It's not a premium grocer like Whole Foods, nor a deep-discounter like Aldi or Lidl. The company instead has existed as a traditional supermarket which uses high customer engagement and sheer proximity to customers (with approximately 2,800 stores spread across 35 states) to drive traffic.

The company's research shows that its customers exhibit high attachment to its brand; thus, Kroger's sales probably won't fall dramatically as price competition escalates. But the organization is very likely to lose some customer visits due to hard-to-resist promotions and the novelty factor as peers open new stores in Kroger-dominated neighborhoods. The combined effect of the trends I've mentioned above can slice off just enough traffic and average basket size to keep a lid on Kroger's comparable sales growth.

How Kroger should react 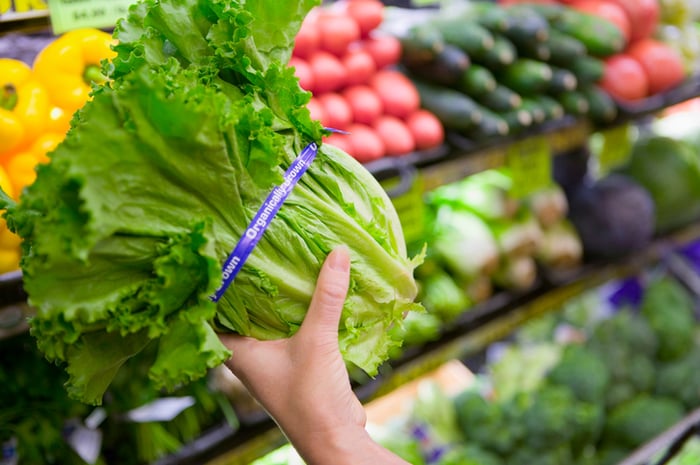 To keep comps from treading water, which won't be kind to its stock price, Kroger has a complex task ahead. The company will have to stay focused, avoid overreaching for desperate solutions, and double down on its very formidable core strengths.

Read through a recent earnings call transcript, or browse the company's quarterly earnings reports, and you'll be reminded of the slate of advantages that propelled Kroger, not many quarters ago, to brisk comps growth. I'll summarize them briefly as follows:

Think of the advantages above as a sort of body armor Kroger constructed over the last few years as competitors refined their individual niches and prepared to attack on price and differentiation. Now's the time to wear that armor in the battle to protect market share and build comps.

This month, CEO Rodney McMullen said emphatically in an earnings conference call that the grocer is "not going to lose on price." Cutting prices is simple, but retaining customers on price alone is not. A more sustainable strategy is to shift more resources away from price investment, and toward the manufacturing, brand, and technology investments which boost inherent advantages.

To stabilize in this environment and grow again, Kroger needs to push its Simple Truth line. It should expand private-label brands that contribute to higher profits. It should continue to embrace online shopping, and dial up the use of analytics to retain customers and incentivize shopping frequency. In reaffirming its strengths, Kroger will reaffirm its identity to its customers.