Nordstrom has finally completed its full-line expansion in Canada, which should help the company's Canadian operations turn profitable in the near future.

Five years ago, American fashion giant Nordstrom (JWN 0.58%) decided to expand into Canada. It identified a handful of attractive sites for full-line stores and made plans to open them over a three-year period beginning in late 2014.

Earlier this month, Nordstrom opened its sixth full-line store in Canada, at Toronto's Sherway Gardens mall. This completes the initial phase of its move into Canada. As Nordstrom's Canadian store base matures, it should contribute to stronger earnings and free cash flow for the company as a whole.

The new Nordstrom store at Sherway Gardens opened to the public on Friday, Sept. 15. In line with company tradition, Nordstrom underwrote a charity gala at the store earlier in the week and hosted a "Beauty Bash" on the morning that the new store opened. Both events served to raise consumer awareness of the new store.

The Sherway Gardens store has many of the same features as Nordstrom's two other Toronto-area stores, despite being smaller. For example, it includes a full-service restaurant, several shoe departments, and complimentary personal stylist services. One unique touch is a dedicated area for Korean beauty products, which are quickly growing in popularity.

Originally, Nordstrom planned to open up to 10 full-line stores and 20 Nordstrom Rack off-price stores in Canada. However, while the Nordstrom Rack expansion is still on track, management has now backed away from the idea of opening more full-line locations. The rapid migration of retail toward e-commerce makes it unnecessary to blanket the country with big stores.

Bringing the Canadian operations to profitability

Up until now, Nordstrom's Canadian operations have lost money consistently. The expansion into Canada has been one of several long-term growth initiatives weighing on profitability.

Part of the problem is that most Nordstrom stores in Canada are a few years from reaching maturity. They are still in the process of building up loyal customer bases. Additionally, Nordstrom Canada has been incurring pre-opening expenses every year due to its ongoing expansion.

These pre-opening expenses will decline dramatically going forward, now that all of the full-line stores are open. (It's much quicker and cheaper to open Nordstrom Rack locations.) Meanwhile, the stores should make steady strides toward profitability. Indeed, Nordstrom has stores in three of Canada's four most productive malls. Sherway Gardens is the "worst" of the six Canadian malls with Nordstrom stores -- and it is still No. 11 in the country. Furthermore, malls in Canada have been performing much better than U.S. malls in recent years.

A stronger Canadian dollar will help, too 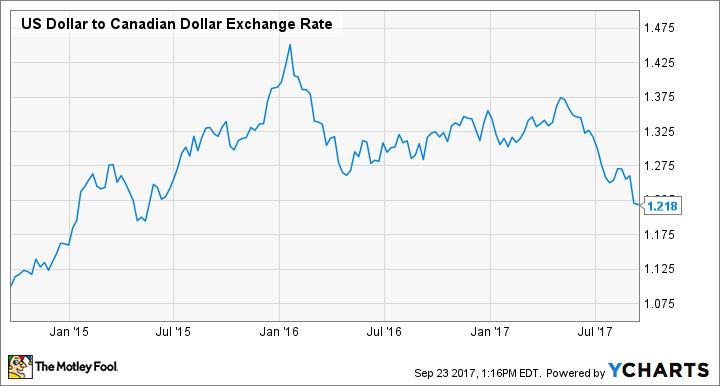 US Dollar to Canadian Dollar Exchange Rate. Data by YCharts.

Nordstrom Canada buys about a third of its merchandise in U.S. dollars. As a result, when the Canadian dollar rises relative to the U.S. dollar, it reduces the cost of buying inventory, leading to stronger gross margin.

The rising Canadian dollar also reflects the underlying strength of Canada's economy. This has allowed other retailers like Hudson's Bay to keep posting sales growth, even as U.S. department stores have struggled mightily.

Thus, Nordstrom's Canadian operations may have just reached a turning point on the road to profitability. Within the next year or two, Nordstrom Canada should start to make a reliably positive contribution to the company's earnings and free cash flow.