Shares of toymaker Mattel (NASDAQ:MAT), the company behind Barbie, Hot Wheels, and Fisher-Price, have tumbled 54% so far this year. While rival Hasbro has been firing on all cylinders, consistently reporting revenue and earnings growth, Mattel has seen its revenue and earnings plunge each year since 2014. Plummeting margins prompted a dividend cut earlier this year that erased a major reason for owning the stock.

Based on its current level of earnings, Mattel stock doesn't look particularly cheap. With earnings per share of $0.70 over the past 12 months, the stock trades at a price-to-earnings ratio of about 20. That's far from no-brainer bargain territory. But those earnings are severely depressed, making the stock look more expensive than it really is. Relative to sales, Mattel stock hasn't been this cheap since 2009, during the stock market plunge brought on by the global financial crisis. 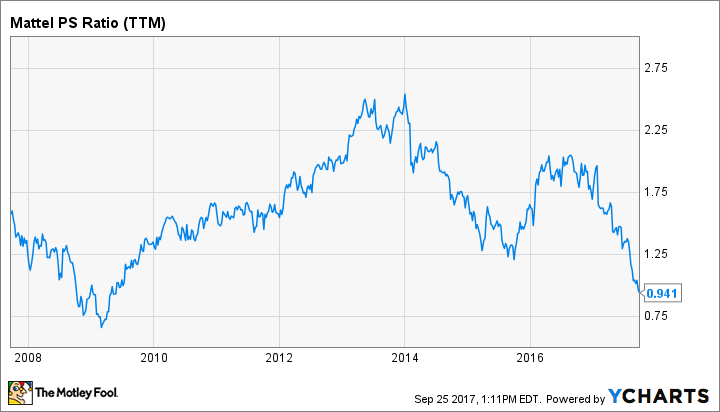 The market is not optimistic about Mattel's prospects. The company has been trudging through a turnaround effort over the past few years that has yet to bear any fruit, still weighed down by its past mistakes. In late 2014, the culture at Mattel, one of endless meetings and prolonged decision-making, got bad enough that the company implemented rules limiting meeting sizes and the maximum number of meetings to make a decision. This culture was creating a drag on Mattel's ability to bring toys to market quickly and efficiently, allowing rivals such as Hasbro and Lego to steal market share.

Mattel produced just $5.34 billion of revenue over the past 12 months, down from $6.49 billion in 2013. Net income has tumbled by about two-thirds during that same time frame, with cost cutting nowhere near enough to offset the effects of slumping revenue. Mattel grew sales in its most recent quarter, reporting a 2% rise globally, but an inventory buildup at retailers continues to hurt results. Mattel estimates that actual sales at retail stores for Barbie Hot Wheels, and Fisher-Price are up by a high single-digit percentage year to date, well above the company's reported numbers.

The Toys "R" Us bankruptcy filing adds another layer to Mattel's problems. While the struggling toy-store chain has secured debtor-in-possession financing, meaning that Mattel and other large toy companies won't be stiffed, it's unclear whether smaller vendors will jump ship out of fear of not being paid. This could hurt holiday sales at Toys "R" Us, a store that accounts for more than 10% of Mattel's annual revenue.

Poor results compounded with uncertainty have pushed Mattel stock down to a multi-year low. Looking at the stock chart, many investors would probably want nothing to do with the struggling company. But the less you pay for a stock, the lower the risk. Mattel is still a risky investment, but the potential reward may be worth taking that risk.

Mattel trades for about 0.94 times its trailing-12-month sales. 2009 was the last time this metric fell so low. Hasbro, a toy company benefiting from Mattel's weakness, trades at almost 2.4 times sales. Granted, Hasbro is producing higher margins and having little growing sales. Mattel deserves to be trading at a lower multiple compared with its more successful competitor.

But it won't take much progress for this valuation gap to begin to close. Mattel has a new CEO, former Google executive Margo Georgiadis, who is aiming to transform the company into one that can thrive as the industry increasingly embraces technology. It won't be easy. Going too far may be just as risky as not going far enough. Mattel's iconic brands are its greatest strength, but too much change could derail the turnaround before it gains any real momentum.

I can't put odds on Mattel's chances of returning to the kind of profitability it achieved before its multi-year meltdown. But investors should ask themselves: Is it reasonable to be as pessimistic about Mattel as the market was in 2009, when the global economy was on the brink? With Mattel stock deeply depressed, the risk-reward trade-off is looking awfully enticing.