While the fuel distribution company made a bold move to improve, it hasn't done enough to win me over.

On the surface, Sunoco LP (SUN 3.10%) seems like it should be an attractive company to yield lovers like me since it currently offers an eye-catching 10.5% yield. However, the beauty of that payout is only skin-deep because of the company's troubling financial situation. While the convenience store operator and fuel distribution company is in the process of completing a major fix that will help address its issues, that doesn't appear to be enough. That's why this is one high-yield stock that I still won't go near.

Sunoco's issues are twofold. First of all, the company took on an enormous amount of debt to complete a slew of acquisitions over the past few years, including spending billions on dropdown transactions with Energy Transfer Partners (NYSE: ETP). While these deals have significantly improved the company's size and scale, they weighed it down with more than $4.4 billion of debt. As a result, its leverage ratio was an unsightly 5.97 times last quarter, which is well above the 4.0 times that's considered safe for a master limited partnership. 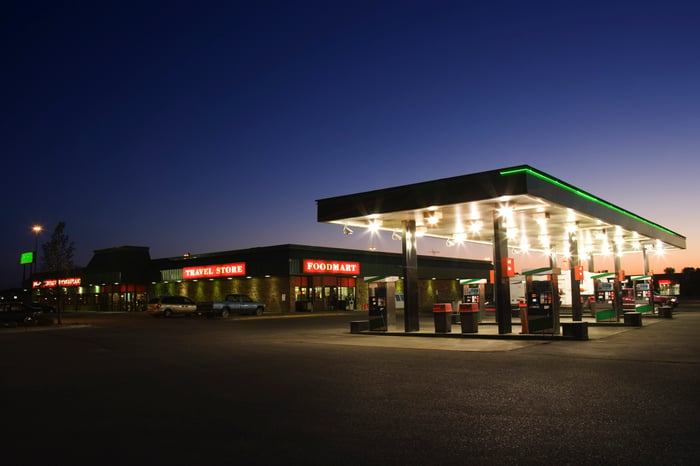 In addition to its leverage problem, the other concern I have with Sunoco is its distribution coverage ratio. Over the past year, that ratio has averaged just 1.03 times, which means the company is paying out nearly all its cash flow, leaving it with a razor-thin margin of error. That's a concern given that its current business model doesn't generate the same level of predictable cash flow that other MLPs can count on since it has some direct exposure to commodity prices while volumes tend to ebb and flow with the economy and fuel demand. That was the case last year when weaker gasoline margins caused its earnings to fall from $715.3 million to $665.3 million, which resulted in the company distributing more cash to investors than it brought in via its operations.

With its financial metrics spiraling out of control, Sunoco took evasive action this spring by signing an agreement to sell the bulk of its convenience stores in a $3.3 billion deal with 7-Eleven. That transaction does several things for the company. First, it will bring in some much-needed cash, which will allow it to quickly get leverage down to its target range of 4.50 to 4.75 times. Furthermore, 7-Eleven signed a long-term fuel supply agreement, which will grow the company's fuel distribution business and provide a stable source of cash flow that will help offset some of the income lost from selling the stores.

That said, one remaining question is if Sunoco will still be able to maintain its current payout level after closing that transaction since those stores currently account for almost half of its earnings. While the loss of that cash flow will make it harder for the company to support its already tight distribution, there are several moving parts here, including the interest savings on the accompanying debt reduction and the incremental cash flow stream from 7-Eleven as a result of the fuel supply agreement. Meanwhile, the company could use some of the cash proceeds to repurchase equity, including the $300 million preferred shares held by its parent Energy Transfer Equity as well as some of the units owned by Energy Transfer Partners from the previous dropdown transactions. In the company's estimation, this combination of the factors should boost the coverage ratio to its long-term target level of 1.1 times. That's if everything goes according to plan.

Setting the bar too low

That said, even if Sunoco hits its financial targets and gets leverage between 4.5 to 4.75 times and distribution coverage to 1.1 times, it would still be a much higher risk option compared to other MLPs. For example, top-tier companies like Magellan Midstream Partners (MMP 1.87%) and Enterprise Products Partners (EPD 2.01%) set their sights much higher. Magellan targets a less than 4.0 times leverage ratio while Enterprise aims to keep that number below 4.5 times. Both also maintain distribution coverage above 1.2 times. By setting a much lower standard, Sunoco runs the risk of getting itself into trouble again, which is why I don't like what I see.