In only a year, Vertex Pharmaceuticals (NASDAQ:VRTX) has grown from a market cap of around $20 billion to knocking on the door of a $40 billion market cap. The biotech isn't finished growing. Wall Street analysts project Vertex will increase earnings by nearly 70% annually over the next few years. If the biotech comes anywhere close to that level of growth, Vertex's market cap will move even higher.

Interestingly, Vertex COO Ian Smith said at the Leerink conference in New York on Wednesday that his company often compares itself to Gilead Sciences (NASDAQ:GILD). According to Smith, Vertex's goal is to do in cystic fibrosis (CF) what Gilead has done in HIV. Can Vertex pull it off? 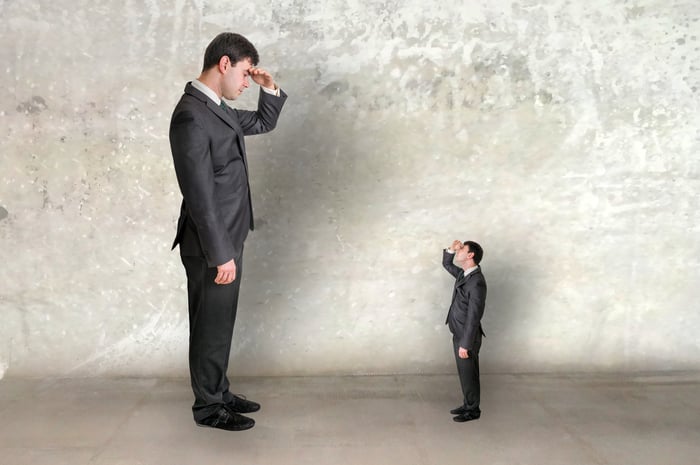 Vertex's admiration of Gilead Sciences is obvious. Smith noted that Gilead was "relentless" in its pursuit of developing new HIV treatments. The big biotech started out with HIV drug Viread, which won Food and Drug Administration approval in 2001. Gilead went on to launch Emtriva a couple of years later. Its greatest success, though, came with combinations of drugs. Truvada, a combination of Viread and Emtriva, gained approval in 2003 and became one of Gilead's top-selling drugs.

Gilead's earlier drugs are now being supplanted by its new combination HIV therapies. Genvoya has enjoyed the most successful launch of an HIV drug in history. Descovey and Odefsey, two other HIV combos containing tenofovir alafenamide (TAF), are also racking up sales. Gilead's next big winner could be its bictegravir/emtricitabine/TAF combo, a product that the biotech has referred to as its "Mount Everest."

This relentless pursuit of new combinations is the same path that Vertex is taking. The company's initial CF product, Kalydeco (ivacaftor), picked up its first FDA approval in 2012. Vertex followed up with Orkambi, a combination of ivacaftor and lumacaftor. The biotech currently awaits approval for its third two-drug combo -- tezecaftor/ivacaftor.

Vertex has even higher hopes for triple-drug combinations. The biotech reported outstanding results in July from phase 1 and phase 2 studies of three different triple-combination CF therapies. Ian Smith said at the Leerink conference that Vertex will likely initiate two late-stage studies of triple-drug combos in early 2018. The company has multiple combos to choose from, but hasn't yet made a decision which two will advance to phase 3.

While Vertex is walking in Gilead's footsteps in some ways, it's taking a similar but different path in others. That's the case particularly in the business development arena.

For example, Gilead Sciences used strategic acquisitions to beef up its pipeline and expand into new therapeutic categories. The most successful of these acquisitions was the company's 2012 purchase of Pharmasset, which launched Gilead's entrance into hepatitis C. The most recent is Gilead's planned buyout of Kite Pharma (NASDAQ: KITE), a move that will instantly position the big biotech as a leader in cell therapy for treating cancer.

Vertex hasn't bought smaller biotechs to forge into new territory. The company has primarily stayed focused on CF (although Vertex does have a phase 2 study underway for an experimental pain drug and has outlicensed some early-stage candidates to other drugmakers).

But Vertex has taken another approach also used by Gilead: collaborations. The company partnered with CRISPR Therapeutics (NASDAQ:CRSP) in 2015 to explore using gene editing in treating CF and sickle cell disease. Last year, Vertex teamed up with Moderna Therapeutics to develop messenger ribonucleic acid (mRNA) therapies for treating CF. The deal cost Vertex $40 million up front with the potential for up to $275 million in milestone payments plus royalties on any future sales. More recently, Vertex purchased rights to experimental CF drug CTP-656 from Concert Pharmaceuticals (NASDAQ:CNCE) for $160 million up front and the potential for up to $90 million in additional milestones.

Could Gilead be the Gilead of CF?

No, Gilead doesn't have any CF drugs in the pipeline. However, the company still has plenty of cash that it could spend on further acquisitions beyond Kite Pharma. Gilead executives have also stated that more deals could be on the way.

Granted, Gilead's focus is more likely to be on oncology, inflammation, and non-alcoholic steatohepatitis (NASH). Getting into the rare-disease market isn't something that Gilead's management team has talked about in the past. But if Gilead truly wants to boost its revenue and earnings growth prospects sooner rather than later, Vertex would be a smart target. Vertex clearly looks at Gilead as an example to follow. Perhaps Gilead is also looking at Vertex.