Please ensure Javascript is enabled for purposes of website accessibility
Log In Help Join The Motley Fool
Free Article Join Over 1 Million Premium Members And Get More In-Depth Stock Guidance and Research
By Jeremy Bowman - Oct 1, 2017 at 8:12AM

It's no secret that the e-commerce giant is an aggressive and disruptive force. Here's why it's so hard to beat.

When Amazon.com (AMZN 2.07%) bought Whole Foods Market in June, the news leveled the supermarket industry. Even titans like Wal-Mart and Costco Wholesale saw their shares suffer as investors feared that Amazon's incursion in the grocery industry would crunch margins and take market share.

The early results indicate that those fears were justified. Amazon officially took over Whole Foods at the end of August and wasted no time slashing prices on staples like eggs, bananas, and avocados, and adding products from Whole Foods' private label 365 brand to its website. As a result, traffic spiked 25% in the first two days following the discounting according to Foursquare, and Amazon sold out of many Whole Foods products online.

That early success shows the power of Amazon's reputation and is one of many reasons why the company is so difficult to compete with. Let's take a closer look at some other reasons below. 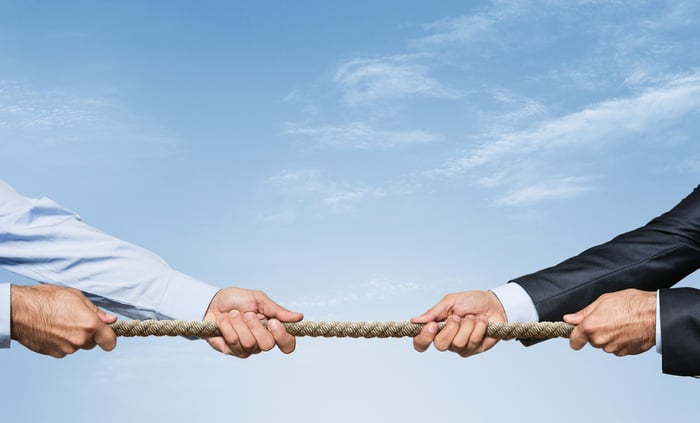 The spike in traffic at Whole Foods isn't only owed to lower prices. Customers also flocked to Amazon's latest prize, because they love the company and want to see what changes it'll make at the grocery chain.

The company's mission is to be Earth's most customer-centric company, and it's taken that to heart by offering free shipping on returns and programs like Prime that offer a smorgasbord of benefits. Historically, the company has been happy to sacrifice profits in order to keep prices low and win over customers. Those efforts have paid off as the company's consistently grown revenue by more than 20% a year, grabbing market share the whole time.

Amazon was ranked No. 1 in customer satisfaction by the American Customer Satisfaction Index this year -- a sharp contrast with its top rival Wal-Mart, which perennially ranks near the bottom in such surveys. Amazon Prime retention rates are also high with an estimated 91% of first-year users renewing for a second.

Amazon.com has become the first-stop shop for many Americans, because its prices are often assumed to be the lowest available, or at least competitive. That reputation helps to explain the traffic spike at Whole Foods.

But the company doesn't always offer the lowest prices. It has created that perception by focusing discounts on the most popular or competitive products on its site, but not the less popular ones, creating a halo effect for many items that consumers are less likely to comparison shop for.

Amazon appears to be implementing that strategy at Whole Foods, lowering prices on popular staples but keeping prices the same on most products, at least for now.

Amazon is more than just a retail giant. It's also one of the foremost technology companies in the world as it pioneers things like drone delivery and voice-activated technology. That gives it an advantage over retail rivals as Amazon has consistently been ahead of the curve on pricing algorithms and website functionality, and it's built the leading cloud computing provider, which powers its own website.

Similarly, products like Alexa, Kindle, and video streaming also complement the company's many offerings, creating an ecosystem within Amazon Prime.

Amazon's unique culture may be the basis for all of its other advantages. Founder and CEO Jeff Bezos explained the company's core ideals in a letter to shareholders, insisting that it's always "Day 1" at Amazon. That mantra means that the company will forever operate with the energy, speed, and risk-taking of a start-up, no matter how large it gets. That's why the company has flung itself headlong into so many emerging technologies and markets, including cloud computing, video streaming, voice-activated technology, e-books, and more.

It also ensures that Amazon moves so fast that even as its competitors adapt, it will be hard for them to catch up. The company is continually investing to make the value proposition better for customers with new fulfillment centers and programs to offer even more products and services.

Wal-Mart, for example, has begun emulating that philosophy after it acquired Jet.com, and with it, founder Marc Lore, who had sold the first e-commerce company he started, Quidsi, to Amazon in 2010. Soon after the acquisition, Lore announced that Wal-Mart was "moving at the speed of a start-up" with a free shipping on orders over $35 and other tactics like Pickup Discount.

Still, Amazon will not be easy for Wal-Mart or any other retailer to match. With its leading customer service, reputation for low prices, and incomparable set of network effects through Prime, the company has made life difficult for so many of its rivals. Following its acquisition of Whole Foods, the squeeze on competitors will only get tighter.