A lead product candidate failed in a phase 2/3 trial, but shares have recovered to a smaller loss.

Shares of pre-revenue biopharma Biohaven Pharmaceutical (BHVN 0.10%) dropped nearly 29% this morning after the company reported that one of its lead drug candidates failed to meet both its primary endpoint and key secondary outcome measure in a phase 2/3 trial. The drug candidate, trigriluzole, was the most advanced in the company's glutamate platform, which targets several rare diseases. The other drug platform is taking aim at more effective treatments for migraines.

Although the drug candidate was well-tolerated, it failed to beat placebo in a trial investigating the potential to treat spinocerebellar ataxia, a severe and often fatal genetic disease affecting motor function. There is no effective treatment nor cure for the hereditary disease.

Shares recovered quickly after a precipitous drop shortly after market open. As of 12:13 p.m. EDT, the stock had settled to a 12.9% loss. 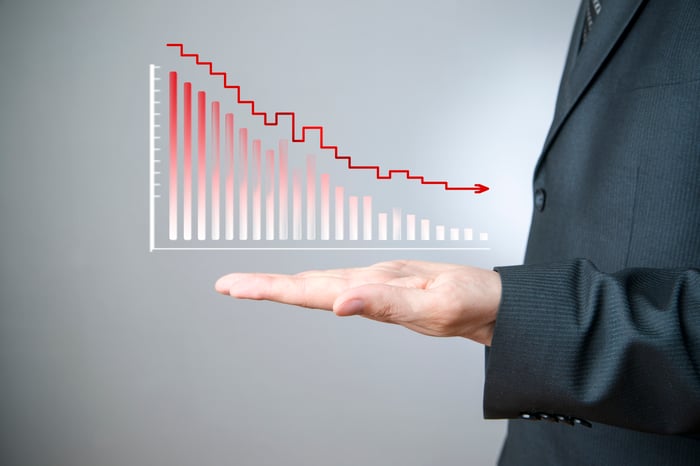 Biohaven Pharmaceutical reported that the drug candidate underperformed placebo on the primary endpoint of average change from baseline on the scale for the assessment and rating of ataxia after eight weeks of treatment. Trigriluzole demonstrated an improvement of -0.81 points on the scale, compared to -1.05 points for patients taking a placebo. The difference was not significant.

The key secondary outcome measure was patient's global impression of change, in which patients were asked how they felt and if they thought their conditions had improved over the course of treatment. Only 50.8% of patients taking the drug candidate thought the therapy helped, compared to 59.1% who felt their condition had improved and were taking placebo. The company noted that it thought the placebo response was surprisingly strong in this particular trial.

The trial failure is a blow to Biohaven Pharmaceutical for more than the immediately obvious reasons. Trigriluzole is being evaluated as a treatment for other ataxias (Friedreich's ataxia and sporadic ataxia), which are near the middle of their development. If the drug candidate fails to be an effective treatment for these hereditary diseases, then that wipes away half of the company's pipeline for its glutamate platform.

Drug failures are par for the course when it comes to treating rare diseases -- the only type of illnesses the company's glutamate platform targets. That said, Biohaven Pharmaceutical has a much less risky drug platform developing treatments for migraines. In 2017 it started two phase 3 trials for its lead drug candidate in that platform, which are expected to produce top-line results in the first half of 2018. That may explain why shares recovered so sharply today, as investors may have something to look forward to. However, as a pre-revenue company, this stock remains a speculative bet.