The indexes set new records, and so did GM, but Nordstrom slumped on a bad news about its buyout plan.

The stock market shook off the tragic news of a mass shooting in Las Vegas, and opened the fourth quarter with solid gains. The Dow Jones Industrial Average (^DJI 1.05%) and the S&P 500 (^GSPC 1.05%) both closed at record highs.

As for individual stocks, General Motors (GM 1.35%) rose on news about its plans for electric and autonomous vehicles, while Nordstrom (JWN -1.75%) fell on a report that the buyout deal it's trying to arrange may be in trouble. 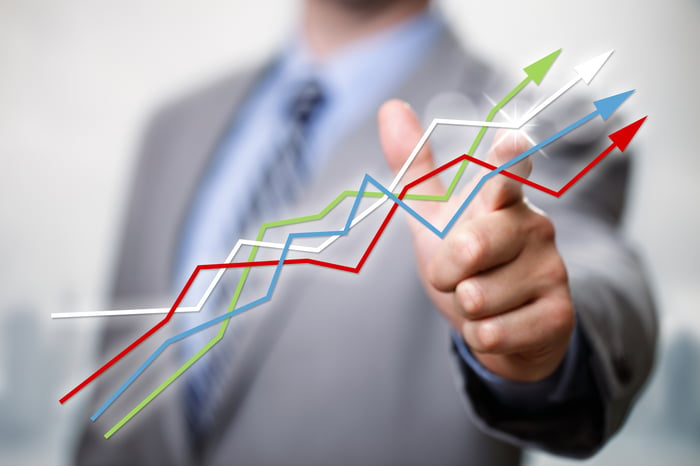 General Motors in the fast lane

General Motors' shares cruised to post-bailout highs Monday after the company filled in some details on its plan to move to fully electric product lines, and an analyst wrote that the company could be on track to sell fully autonomous vehicles sooner than observers have been expecting. Shares closed 4.4% higher.

Adding to the buzz were comments by Deutsche Bank that large-scale commercial deployment of driverless cars by GM could happen in 20202 -- much sooner than expected, and ahead of its major competitors.

GM CEO Mary Barra has been very open about the company's vision for leadership in a future of "zero crashes, zero emissions, and zero congestion" by means of all-electric vehicles, self-driving technology, vehicle connectivity, and ride-sharing businesses. Indeed, its moves in those directions may be driven by necessity, given that governments in some of its biggest markets are talking about banning gas-powered cars, and as economics of EVs appear near a tipping point. Monday's news gave investors move confidence that GM is on the right road.

Nordstrom deal could be shaky

Shares of Nordstrom closed down 6.3% after the New York Post reported that talks to take the company private may be breaking down. The article quoted two sources close to the situation as saying that acquiring financing for the deal became more difficult after retailer Toy R Us filed for bankruptcy last month.

The stock soared in early June when the retailer announced that the Nordstrom family, which holds more than 30% of the company's outstanding shares, was seeking to take it private. Monday's report caused the stock to give back some, but not all of those gains. The company hasn't been commenting publicly on the progress of talks the family is having with private investors.

Department store chains' stocks have been under pressure in 2017 as falling traffic and a highly promotional environment have led to declines in same-store sales. But perhaps somewhat overlooked by investors has been the fact that Nordstrom has turned in some strong quarters, and has actually been growing sales and investing in technology. But as long as a buyout looms as a possibility, the market will probably continue to focus on that, which gives long-term investors who believe the company is not getting the credit it is due the occasional buying opportunity.