Apple (NASDAQ:AAPL) released three new iPhones this year. Two of them have liquid crystal displays (LCDs) very similar to the ones found in last year's iPhone 7 and iPhone 7 Plus, while the third has an organic light-emitting diode (OLED)-based display.

It had previously been believed that after this generation of iPhones, Apple would move away from LCDs altogether in favor of OLED-based displays.

However, a few days ago, a new report surfaced claiming that Apple was planning yet another LCD-based iPhone for next year in addition to two models with OLEDs.

Now, The Wall Street Journal (subscription required) appears to have corroborated the first report and is offering additional details. 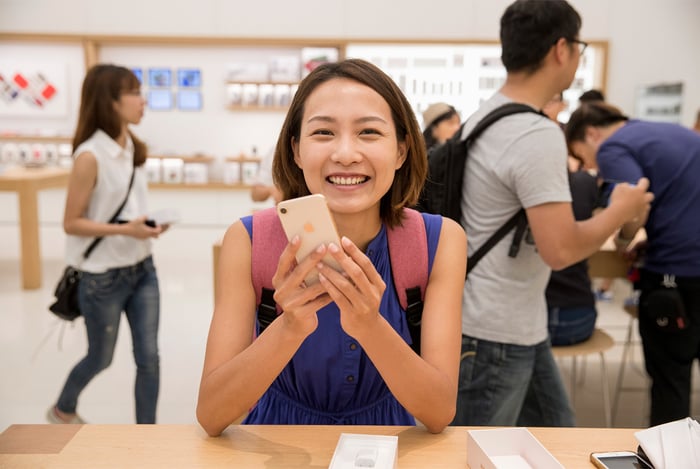 Japan Display is one of the key suppliers of the LCDs for the new iPhone 8 smartphones, as well as for previous generation iPhones. Apple's shift to OLED for some models of the iPhone, including this year's iPhone X and reportedly next year's rumored high-end models, was expected to have an adverse effect on Japan Display's LCD business, forcing it to scramble to bring OLEDs into mass production as quickly as possible.

However, in what appears to be some good news for Japan Display, The Wall Street Journal, citing unnamed sources, says that Apple is looking at using Japan Display's so-called FULL ACTIVE LCD technology for at least some of its next-generation iPhones.

Per Japan Display's website, its FULL ACTIVE LCDs use "a new high-density wiring layout, and new processing and module assembly technologies" to dramatically reduce the size of the bottom bezel of the screen.

"This newly designed LCD module structure will allow the size of a smartphone device to be nearly the same as the display size," the June 2017 press release announcing the FULL ACTIVE technology reads.

Apple stuck to the same basic form factor for four generations beginning with the iPhone 6 and iPhone 6 Plus through the company's latest iPhone 8 and iPhone 8 Plus.

If Apple does introduce a next-generation LCD-based iPhone next year, I don't think customers should expect it to look like this year's models. Instead, they should expect reduced side bezels and probably much smaller, if not nearly nonexistent, top and bottom bezels.

One of the probable reasons that Apple stuck with such large top and bottom bezels was likely to accommodate the home button. Since Apple eliminated the home button with the iPhone X in favor of gestures performed directly on the display, Apple could build a next-generation LCD iPhone with a very high screen-to-body ratio by removing the home button.

The only open question in my mind is what Apple will do for biometric authentication in such a new device. Apple could throw in a TrueDepth camera with Face ID support and go that route, but that could be costly.

Alternatively, Apple could bite the bullet and put a next-generation Touch ID sensor on the back of the phone. Apple would need to improve its Touch ID technology to be able to scan through glass, though this should be easier than building a fingerprint scanner that can scan through a display, something that Apple may or may not have failed to do during the development of the iPhone X.

Why this is a good thing

The truth is that OLED displays are expensive. Not only is building the technology believed to be more difficult (and therefore more expensive) than building LCDs, but Apple is still largely beholden to a single vendor of OLED panels for now, reducing its pricing leverage.

What I expect Apple to do, then, is to update this year's iPhone X with new technologies and continue to charge $999 for the base model and $1,149 for the higher-storage tier. I expect the company to introduce the rumored 6.46-inch iPhone X successor with OLED display at an even higher price point (say, $1,099 for the base model and $1,249 for the higher storage tier), then introduce a 6-inch LCD iPhone at around $749 -- the average of the base prices of the iPhone 8 and the iPhone 8 Plus.

This way, Apple would have a highly compelling next-generation iPhone at a more familiar price point while also giving customers the option to pay more for more advanced phones, if they'd like -- the same playbook Apple is using this year.