The furniture and consumer electronics retailer moves higher after an analyst upgrade. Conn's stock has more than doubled in 2017.

Nagel feels that Conn's credit business -- a bone of contention at the retailer when delinquencies spike, since the chain helps buyers finance big-ticket items that they can't afford right away -- is on solid footing these days. He feels the market's underestimating Conn's ability to thrive in this climate. He is raising his rating on the shares from perform to outperform. His $40 price target suggests that there's still 42% of upside in the next 12-18 months. 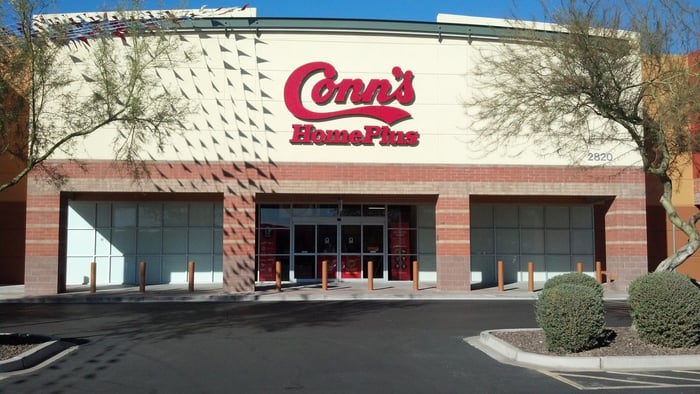 The reign of Conn's

Conn's stock has been one of this year's biggest winners, soaring 123% so far. The lion's share of those gains came in April, with the stock more than doubling in a single month. Shares went on to hit yet another two-year high earlier this week.

The 116-unit chain posted mixed quarterly results last month. Its adjusted profit of $0.26 a share floored analysts holding out for a small deficit, but $366.6 million in revenue fell short of the $371.9 million that Wall Street was targeting.

Conn's revenue clocked in 8% lower for the period, as a healthy uptick in credit revenue wasn't enough to offset a 15% decline in retail sales. The double-digit slide in comps at the store level isn't as problematic as it appears, as Conn's has been beefing up its financing standards and discounting its less-profitable products. The strategy is working, as delinquencies are shrinking and margins are widening.

The profit that Conn's scored during the fiscal second quarter is also a pretty big deal, as it's the first time that the retailer has been profitable outside of the Christmas-containing quarter in two years. The retailer's product mix -- nearly two-thirds of its sales are coming from furniture, mattresses, and appliances -- makes it dependent on big-ticket purchases. Less than a fifth of its sales are consumer electronics, so it's not a fair match to the last consumer electronics superstore chain standing.

The turnaround is real. Analysts keep jacking up their price targets, and profit goals keep moving higher with every passing quarter. The stock has been on a tear -- nearly tripling over the past 12 months -- but the Conn's is fetching just 17 times next year's projected earnings. Conn's has been one of this year's biggest stocks, but the year isn't over, and shares probably aren't done winning.