Please ensure Javascript is enabled for purposes of website accessibility
Log In Help Join The Motley Fool
Free Article Join Over 1 Million Premium Members And Get More In-Depth Stock Guidance and Research
By Keith Speights - Oct 3, 2017 at 5:03AM

Investors seem to be worried more about recent negative developments for the big biotech. But are they right?

You knew it wouldn't take too long for euphoria over Gilead Sciences' (GILD 0.89%) planned acquisition of Kite Pharma to wear off. The question was whether the next round of news for the big biotech would be good or bad. As it turned out, Gilead has had both over the last few days.

But all news isn't equally important. Here are the good and bad recent developments for Gilead, and what the real impact of each could be. 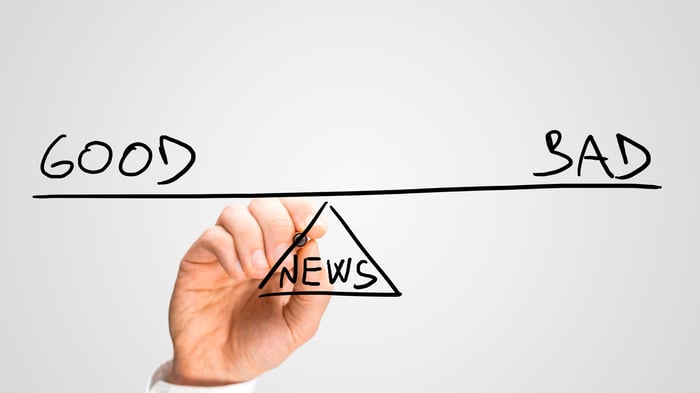 Most people want to hear the bad news first, according to psychology researchers, so let's start with Gilead Sciences' recent negative developments. One is that longtime COO Kevin Young is retiring from the company in early 2018.

Young joined Gilead in 2004 after spending 20 years in the biopharmaceutical industry. He played an instrumental role in several important product launches for the company, including Gilead's first single-tablet HIV drugs and the enormously successful introductions of hepatitis C drugs Sovaldi and Harvoni.

This isn't Young's first time to retire. In 2014, he retired from Gilead but continued to serve as a senior advisor. Last year, though, Young came out of his semi-retirement to take the COO job.

Gilead's other bad news comes on the legal front. The U.S. Court of Appeals for the Ninth Circuit reversed a federal district court's dismissal of a whistleblower lawsuit by former Gilead Sciences employees Jeff and Sherilyn Campie. The Campies alleged that Gilead used unauthorized facilities in China to manufacture HIV drugs Emtriva, Truvada, and Atripla for at least two years beginning in December 2007. The lawsuit claims that Gilead used the Chinese facilities to lower costs and trigger price reduction clauses in contracts with other manufacturers.

In addition, it is alleged that Gilead covered up quality problems that occurred in the Chinese facilities. Jeff Campie served as senior director of global quality assurance for Gilead from July 2006 to July 2009. Campie maintains that he raised concerns about "the integrity of the data being generated to support the release of Gilead drugs" beginning in 2007. He claims that he was ultimately fired as a result of his efforts to draw attention to the issues.

What's the good news for Gilead? Merck (MRK 1.37%) announced that it was discontinuing development for two experimental hepatitis C virus (HCV) drugs. This decision was made, according to the big drugmaker, "based on a review of available Phase 2 efficacy data and in consideration of the evolving marketplace and the growing number of treatment options available for patients with chronic HCV infection."

Merck will continue to market its already-approved HCV drug, Zepatier. However, Zepatier hasn't been very competitive against Gilead's HCV franchise. Merck's move effectively means that the HCV market is now defined by a primarily one-on-one battle between Gilead Sciences and AbbVie (ABBV 0.42%).

AbbVie recently launched its pan-genotypic HCV therapy, Mavyret. The company priced Mavyret at a significant discount to Gilead's pan-genotypic drug Epclusa. At the Citi biotech conference in early September, Kevin Young noted that AbbVie's product was "the closest thing we've seen to the profile of [Gilead's] HCV drugs." While Gilead will likely be forced to reduce prices to compete against AbbVie, the news from Merck is positive for both companies.

How the developments tip the scale

Investors appeared to have given Gilead's bad news more weight than they did the good news. Gilead stock fell 3.5% after the announcement of Young's retirement and the reopening of the whistleblower case. Shares didn't appear to be impacted very much by Merck's decision. Instant reactions aren't always the most important ones, though.

Young's retirement shouldn't be a long-term issue for Gilead. The biotech will certainly be able to hire a capable replacement -- and Young is helping for several months to transition. If Gilead is ultimately found to have done the things it is alleged to have done in the whistleblower case, it could cost the company big time. However, right now all we have are allegations.

On the other hand, the evaporation of potential new competition from Merck should translate to hard dollars for Gilead. As Leerink Partners analyst Geoffrey Porges said about Merck's decision, this "changes everything." Porges thinks that "the pace of erosion of Gilead's HCV revenue should slow" and the indication should be "a meaningful source of revenue" for both Gilead and AbbVie for a long time to come.

I agree with Porges' assessment of the situation. Things could change if Gilead is found to have violated regulations as alleged. For now, though, Gilead's good news is more concrete and relevant financially to the company than the bad news.