The company's new cloud database platform will dramatically undercut AWS on price. The cloud computing wars are heating up, and Oracle wants a bigger piece of the pie.

Like all legacy technology companies, database giant Oracle (ORCL 0.92%) has been forced to adapt to the continued rise of cloud computing. The switching costs associated with Oracle's products are significant, but the last thing the company wants is its customers moving databases to cloud computing providers like Amazon (AMZN 1.42%) Web Services.

At Oracle's OpenWorld conference, the company unveiled the next step in its plan to go toe-to-toe with AWS. Oracle's autonomous database cloud, powered by the next-generation version of Oracle Database, comes with some big promises. And Larry Ellison, Oracle's founder and executive chairman, had some fighting words for the cloud computing leader. 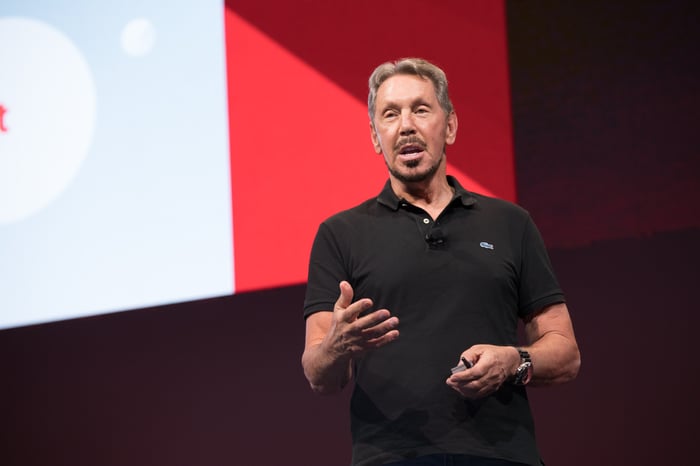 Oracle's cloud strategy up to this point has been mostly defensive. The company's database product is dominant, with a market share in excess of 40% in 2015, but we're still in the early innings of the shift to the cloud. As Oracle's on-premise database customers consider moving to the cloud, the company needs to ensure that they choose Oracle's cloud over the competition. Moving an Oracle database to AWS is the first step in dumping Oracle altogether.

Oracle announced its Generation 2 cloud infrastructure about a year ago, promising that Oracle's database would run dramatically faster compared to Amazon's Redshift database running on AWS. Ellison said at the time: "Amazon's lead is over. Amazon's going to have serious competition going forward."

Oracle's autonomous database cloud ups the ante, and instead of simply being aimed at keeping existing customers, the company is now clearly going after AWS customers. Ellison said during his keynote that Oracle would guarantee, in writing, that this new database service would cost less than half the price of running the same workloads on Amazon Redshift on AWS. That's quite the promise.

Oracle can make this promise because the autonomous database cloud lowers costs by automating processes. The company claims that the system eliminates the human labor typically needed to tune, patch, update, and maintain databases, thus lowering costs for its customers. Using machine learning, the system will tune performance automatically, upgrade and patch itself, and allow for resizing compute and storage with no downtime. Oracle is guaranteeing 99.995% availability, above the 99.95% availability promised by Amazon's relational database services.

How much of this talk about machine learning and automation is marketing, and how much is genuine innovation remains to be seen. Oracle's autonomous database will be available by the end of the year for data warehouse workloads, with support for other types of workloads coming in 2018.

Betting on the cloud

Oracle's cloud business represents only a small portion of the company's revenue. Cloud revenue was $1.47 billion during the latest quarter, or about 16% of the total. Most of Oracle's revenue still comes from selling software licenses and providing product support, and it will likely take many years for that to no longer be the case.

Oracle's cloud business is growing fast, though, and the introduction of the aggressively priced autonomous database cloud could turbocharge that growth next year. Software-as-a-service revenue soared 62% year over year during the latest quarter to $1.07 billion, while platform-as-a-service and infrastructure-as-a-service revenues jumped 27% to $400 million. In the latter category, Oracle remains a small fish in a pond dominated by AWS.

With the autonomous database cloud, Oracle is intensifying its battle with AWS. This time around, the company is promising to dramatically beat Amazon on price, with that commitment written into customer contracts. Oracle was late to the cloud computing party, but it's making up for lost time in a big way.